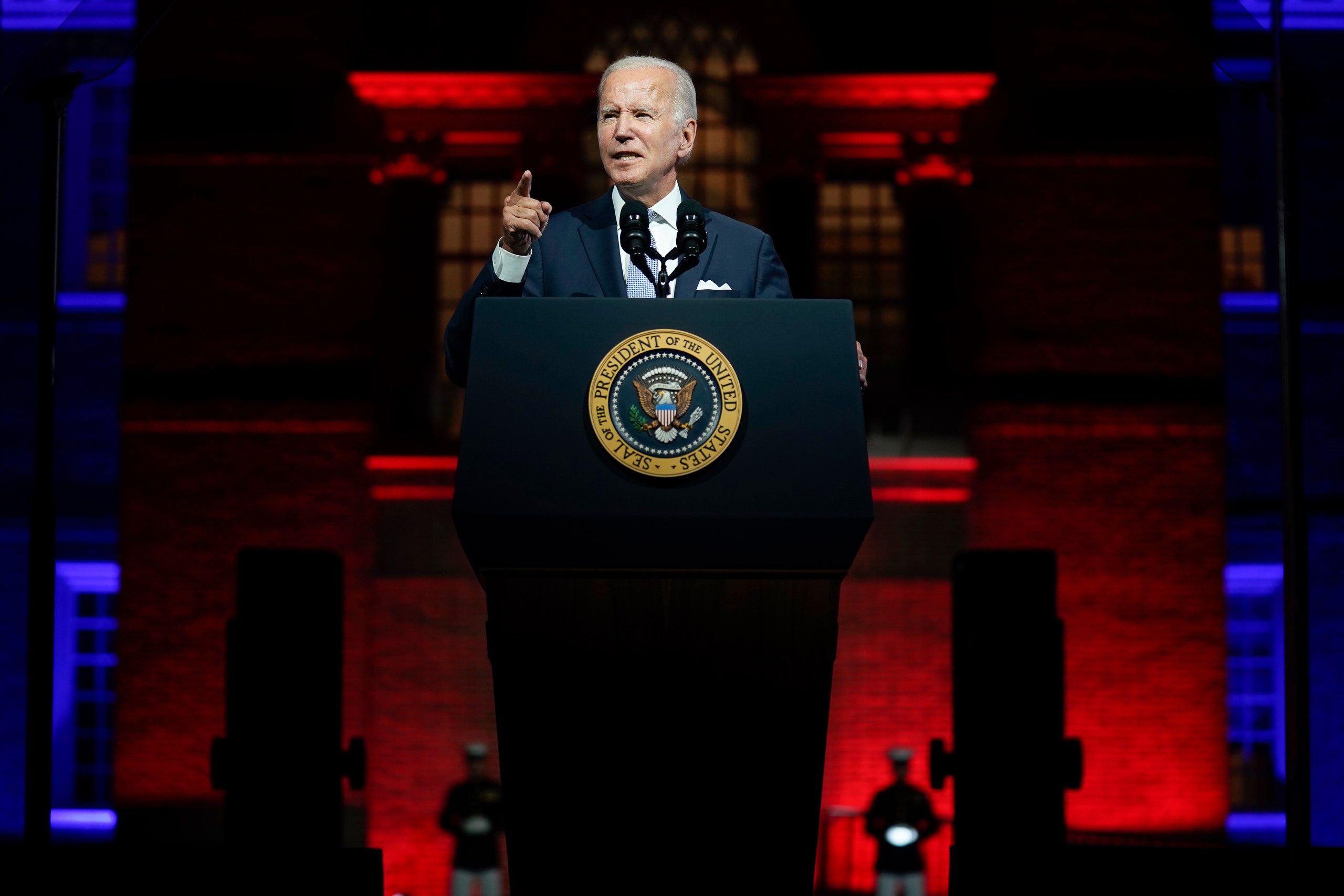 In a speech on Thursday night, billed as a major address about the “battle for the soul of the nation,” Joe Biden said the word “Trump” only twice. The current President may not have mentioned his predecessor’s name much, but Biden’s speech, as is the case with the rest of his Presidency, was all about standing against Trump and the unique threat to American democracy that he and his “Make America Great Again” supporters pose.

“Donald Trump and the MAGA Republicans represent an extremism that threatens the very foundations of our republic,” Biden said.

The Republican Party is “dominated, driven, and intimidated by Donald Trump and the MAGA Republicans,” he said.

“MAGA Republicans do not respect the Constitution,” he said.

“MAGA forces are determined to take the country backwards,” he said.

Thirteen times, in fact, Biden called out the Trumpists who have seized hold of one of America’s two great political parties—in just about the most unsparing terms a President has ever used for political opponents. I guess that Biden, subject of endless laments so recently from Democrats who feared he was reluctant to take on the Trump-captive G.O.P. in strong enough terms, is not afraid of going on the attack anymore.

I suspect that few will remember Biden’s words on Thursday night, however, as much as they will think of the ominous setting—the front of Philadelphia’s Independence Hall at night, with dramatic red floodlights as the backdrop for the President while he spoke in dire terms about the possibility of political violence from the Trumpists who still refuse to concede Trump’s 2src2src defeat, and who celebrate the violent mob that stormed the Capitol in hopes of overturning it. Just hours before Biden’s speech, in fact, Trump himself bragged of giving financial support to some of the insurrectionists who have been charged by the Justice Department, and told an interviewer that he was considering offering blanket pardons to the January 6th defendants, should he be reëlected in 2src24.

MAGA Republicans seemed to think that the scary setting for Biden’s alarming message was somehow beneficial to them, and they soon began sharing images of the dramatic black-and-neon-red scene. “I can’t believe this is a real photograph,” J. D. Vance, the Trump-backed Republican nominee for Senate in Ohio, tweeted. “It depicts the president of our nation, as he took to the airwaves and spoke about his fellow citizens as if they were sewer rats.” Rick Scott, the Republican Senate campaign chief, tweeted the photo and dismissed Biden as a “raving lunatic” who “attacked half the country tonight.” Mike Huckabee, the former governor of Arkansas, called it a “hate speech.” Over on Fox News, Tucker Carlson was very, very angry about the “blood-red Nazi background” and the Marine honor guard in front of Independence Hall, a setting that he termed a “complete outrage.” Even before Biden spoke, Kevin McCarthy—the House Minority Leader, whose slavish devotion earned him the sobriquet “my Kevin” from Trump—gave a prebuttal, in which he said that the President should “apologize for slandering tens of millions of Americans as fascists.”

In the inverted logic of Trumpworld, theirs is the grievance that matters. They are always the wronged party. Storming the Capitol and defying the will of the voters in 2src2src was totally fine. But how dare Joe Biden say such nasty things about them for doing so? These howls of complaint might have been fun to listen to from the folks who routinely savage Biden as a wild-eyed socialist out to destroy freedom itself, if what they themselves were doing to the country were not so deadly serious.

As an opening act of the fall campaign season, none of this bodes well. The country is clearly in for another period of electioneering in which playing to the fears of one’s supporters will be just about all that matters. Democrats are hoping, against history and most of the evidence, to turn the midterm election, once again, into a referendum on Trump, and, in so doing, to save their control over the Senate and maybe even the House. Nothing unites Democrats more than their hatred of Trump, a subject that they feel more passionate about than their support for Biden; maybe their fear and loathing toward the man of Mar-a-Lago, along with their outrage over the Supreme Court’s decision this summer throwing out Roe v. Wade, will be enough to overcome the odds in November. As for Republicans, they surely would prefer to talk about the country’s sour mood, high inflation, and wavering economy under Biden, but they remain hooked on Trump—and Trump was never going to make the election about anything but himself. He won’t move on from 2src2src, so they can’t move on from 2src2src.

In watching the awkward squirming and instant blame-shifting, it can be easy to forget that this is hardly standard-issue campaign rhetoric—from either side. Presidents do not generally accuse the other party of attempting to eviscerate democracy, of defying the rule of law itself. But nor have they had to. “You can’t love your country only when you win,” Biden said, which is no longer the self-evident fact about America that it used to be.

“Too much of what is happening today in our country is not normal,” Biden said, early in his speech, a statement that was both correct and wildly understated. That longing for “normal” is something I have heard often expressed in Washington over these past few Trump-dominated years in American politics, with all the former President’s bizarre Oval Office rants and his and his followers’ willingness to torch even the most long-standing American traditions.

What scares me most about this moment is that I remember hearing this lament before—in Vladimir Putin’s Russia. Arriving in Moscow a decade after the collapse of the Soviet Union, I often heard Russians I interviewed complaining about the upending of their world, with the attendant economic and social collapse, in ways that were strikingly similar to the complaints of many Americans today. Where we in the West saw Mikhail Gorbachev as a hero who had helped bring an end to decades of Communist tyranny, all too many Russians agreed with Putin that the collapse of the Soviet Union, which Gorbachev helped bring about, was a “catastrophe.” What they wanted, many told me, was to live in a “normal, civilized country.”

A few days ago, Gorbachev died, at the age of ninety-one, his dream of Russian democracy having long ago perished. Now even American democracy itself is teetering. How telling it is that, when the President of the United States today speaks of threats to the nation, he is warning not about adversaries abroad but the danger within. “Normal” never sounded so good. ♦