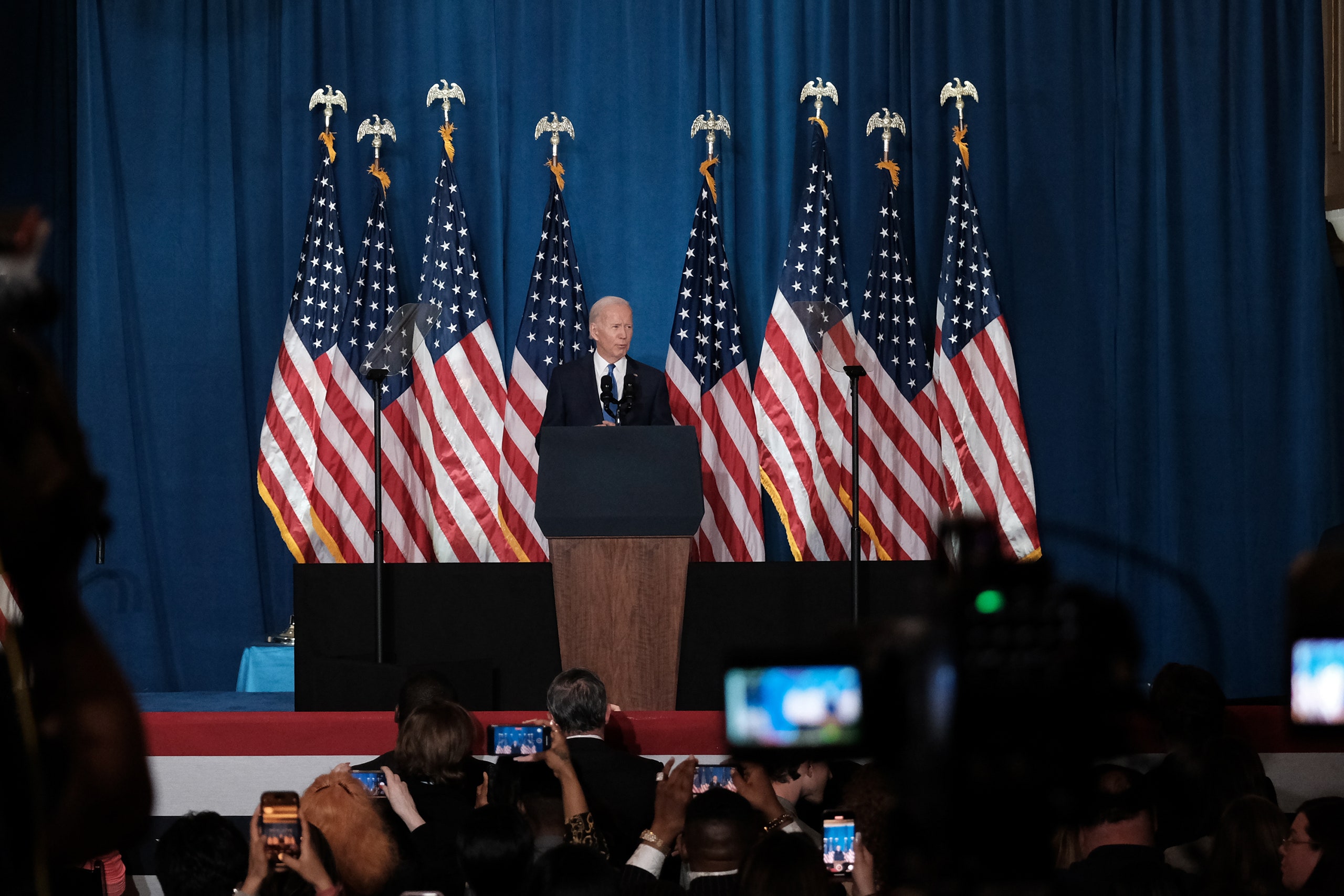 On Wednesday night, less than a week before the midterm elections that will determine the future of his Presidency, Joe Biden summoned the television cameras for a hastily planned speech at Union Station. Against a backdrop of American flags, he offered a closing argument for the campaign that was chillingly direct, if not exactly what the Party’s message gurus would prefer: Democracy itself, the President said, is on the ballot.

Biden began by mentioning the recent attack on “my friend,” House Speaker Nancy Pelosi’s eighty-two-year-old husband, Paul Pelosi, whose head was smashed during an encounter with an intruder who told police he was searching for his wife. But the heart of Biden’s speech was about Donald Trump’s Big Lie about the election of 2src2src and how it has reshaped American politics into an ongoing crisis over basic adherence to the Constitution. “He’s made a big lie an article of faith in the MAGA Republican party,” Biden said of “the defeated former President . . . who refuses to accept the fact that he lost.” The result is an election two years later in which “extreme MAGA Republicans” have made questioning the legitimacy of any races they do not win the party’s new ideology. Their plan, he warned, is to “subvert the electoral system itself.” And that means that anything, including even “disunion and chaos,” is possible.

I’m sure that many Democratic candidates in close races around the country would prefer that Biden had spoken about his plan to defeat inflation or bring down gas prices or safeguard women’s reproductive rights. The President’s pitch, though, was not about policy battles as much as first principles. He was campaigning for democratic votes, not just Democratic ones. “We can’t take democracy for granted any longer,” he warned. There was no real news in this lament other than the startling fact of it occurring. As I listened, it sounded to me like Biden’s personal rebuttal to a recent Times public-opinion survey that seemed to sum up the dissonance of a nation hurtling recklessly over a cliff: “Voters see democracy in peril,” the paper found in its poll, “but saving it isn’t a priority.”

A few hours later, I received the last in that day’s barrage of fund-raising e-mails from Donald Trump. It contained, more or less, his version of a closing argument. The former President’s pitch was not about the future of democracy or even, for that matter, about what to do for the economy; it was about Hunter Biden’s “Laptop from Hell” and his own claims of endless persecution. “The Witch Hunt continues,” Trump lamented, even though, “after 6 years and millions of pages of documents, they’ve got nothing.” It wasn’t clear from the e-mail what persecution he was referring to, but that wasn’t really the point. The point was that they were out to get him, whoever “they” are, and it wasn’t fair. “If I had what Hunter and Joe had,” Trump said, “it would be the Electric Chair.”

Over the next few days, Trump will travel the country, appearing at rallies in four states: Florida, Iowa, Pennsylvania, and Ohio. He will, no doubt, have many, many words to say on many problems, from the evils of immigration to the horrors of inflation, that are fuelling Republican hopes of a national red wave giving them control of Congress. But the real message from Trump will be the one from his fund-raising e-mail: It’s all about me, me, me.

I have been around a lot of midterm elections. When Republicans retook the House of Representatives for the first time in forty years, in 1994, I was a young reporter at the Capitol Hill newspaper Roll Call. The red wave that boosted Newt Gingrich’s Republican revolutionaries to power in the House resulted in a fifty-four-seat pickup, and even many Democrats considered to have safe seats, including the Speaker of the House himself, Tom Foley, lost reëlection. Republicans this time do not need anything like that kind of a surge to reclaim power on the Hill. They don’t even need a wave. (For an excellent wonky discussion of just what a wave is anyway, and why one is unlikely this time according to the precise definition, try this piece in the Washington Monthly.) In the House, a modest gain of just five seats would lead to a G.O.P. takeover; on average, the party in power in such midterms loses around twenty-five seats. In the Senate, Republicans need just a one-seat pickup. Math is math. The vast weight of both past history and present evidence suggests that, even with an array of too-close-to-call races in key states such as Georgia and Pennsylvania, control of one or both chambers is well within the G.O.P.’s reach.

Republicans are so close to power that they can smell it. In Washington, the spoils are being preëmptively divvied up. There are lists of who gets what committee, and lots of reporting on whether, if, and when Republicans will seek vengeance by seeking to impeach President Biden; the Secretary of Homeland Security, Alejandro Mayorkas; or others. One can only imagine what a Jim Jordan-chaired House Judiciary Committee would do.

At such a moment, expediency has taken hold. Even those Republicans who have claimed to be against Trump’s election lies are now supporting candidates who have promoted those lies. Consider the smarmy Nikki Haley, who said on the “Today” show last month, “Everybody that I’m helping acknowledges the fact that the elections, you know, were real,” before continuing to endorse and campaign for a slew of election deniers. Former Vice-President Mike Pence, who literally risked his life on January 6, 2src21, to defy Trump and confirm Biden as the legitimate winner, has been out campaigning for candidates who have perpetuated Trump’s lies about the election. And of course they are. The entire Republican ticket this fall, up and down the ballot, is filled with hundreds of election deniers. There is no way to be a Republican leader and not support at least some of them.