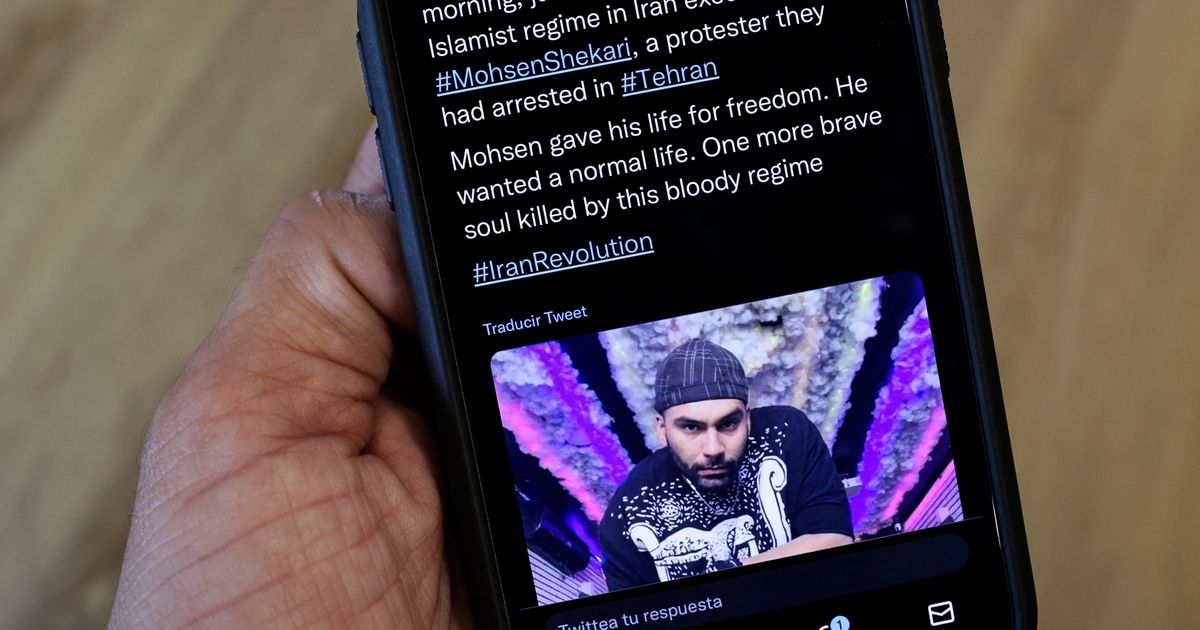 Iran executed a man Thursday, state media reported, in the first known use of the death penalty linked to the anti-government protests that have gripped the country and challenged its clerical leadership since September.

Mohsen Shekari, 23, was hanged on Thursday after Tehran’s Revolutionary Court found him guilty of “waging war against God” for allegedly causing unrest and stabbing a member of the pro-regime Basij paramilitary force, according to the Mizan news agency, which is run by Iran’s Judiciary.

Shekari was accused of blocking a street in Tehran on Sept. 25 and injuring a Basij member with a machete, according to Mizan. He was convicted on Nov. 1 and declared guilty of “drawing weapons with the intention of killing people, causing terror, and disturbing people’s freedom and security and leading to insecurity in that environment.”

This is the first execution carried out in connection to the wave of unrest in Iran that erupted in September to protest the death of Mahsa Amini, 22.

Amini died after being detained by Iran’s notorious morality police ― a “Guidance Patrol” that enforces a dress code and has long harassed Iranian women ― for allegedly not wearing proper hijab.

Amnesty International’s official page on Iran tweeted Thursday that the organization is “horrified” at Shekari’s execution, saying he was sentenced to death in “a grossly unfair sham trial.”

“His execution exposes the inhumanity of Iran’s so-called justice system as dozens of others face the same fate,” one of Amnesty International’s tweets read. The group urged the international community to call on Iranian authorities to “immediately halt all planned executions and stop using the death penalty as [a] tool of political repression against protesters in their desperate attempt to end the popular uprising.”

Iran Human Rights ― a nonprofit human rights organization with members inside and outside Iran ― said in a statement Thursday that Shekari was “denied access to his lawyer throughout the interrogation phase or legal proceedings,” and that the hard-line Fars news agency aired his “forced confessions” hours after his execution. In the video, a bruise is visible on Shekari’s right cheek.

“Mohsen Shekari was executed after a hasty and unfair trial without a lawyer,” Mahmood Amiry-Moghaddam, the director of Iran Human Rights, said. “The international community must immediately and strongly react to this execution. The Islamic Republic must face consequences that will prevent the further execution of protesters. If Mohsen Shekari’s execution is not met with serious consequences for the government, we will face mass execution of protesters.”

According to Amnesty International, as of November, Iranian authorities were seeking the death penalty for at least 21 people in connection with the protests.

Throughout the protests, demonstrators have demanded removal of the mandatory hijab and the Guidance Patrol. The protests swiftly expanded into cries for “death to the dictator” and the overthrow of the Islamic Republic.

Government security forces have responded to the protests with deadly, uncompromising force. At least 458 people have been killed in the unrest since September, according to Iran Human Rights.

More recently, protesters called on shop owners to close their businesses for a three-day strike. Witnesses said large numbers of businesses were shut down across the country on Tuesday, Voice of America reported.

Many international media outlets quoting Iran’s attorney general reported on Saturday that the country’s morality police had been shut down in an apparent response to the protests. However, local media later claimed the official’s quote had been misinterpreted, and that no official had confirmed the closure, according to the BBC.