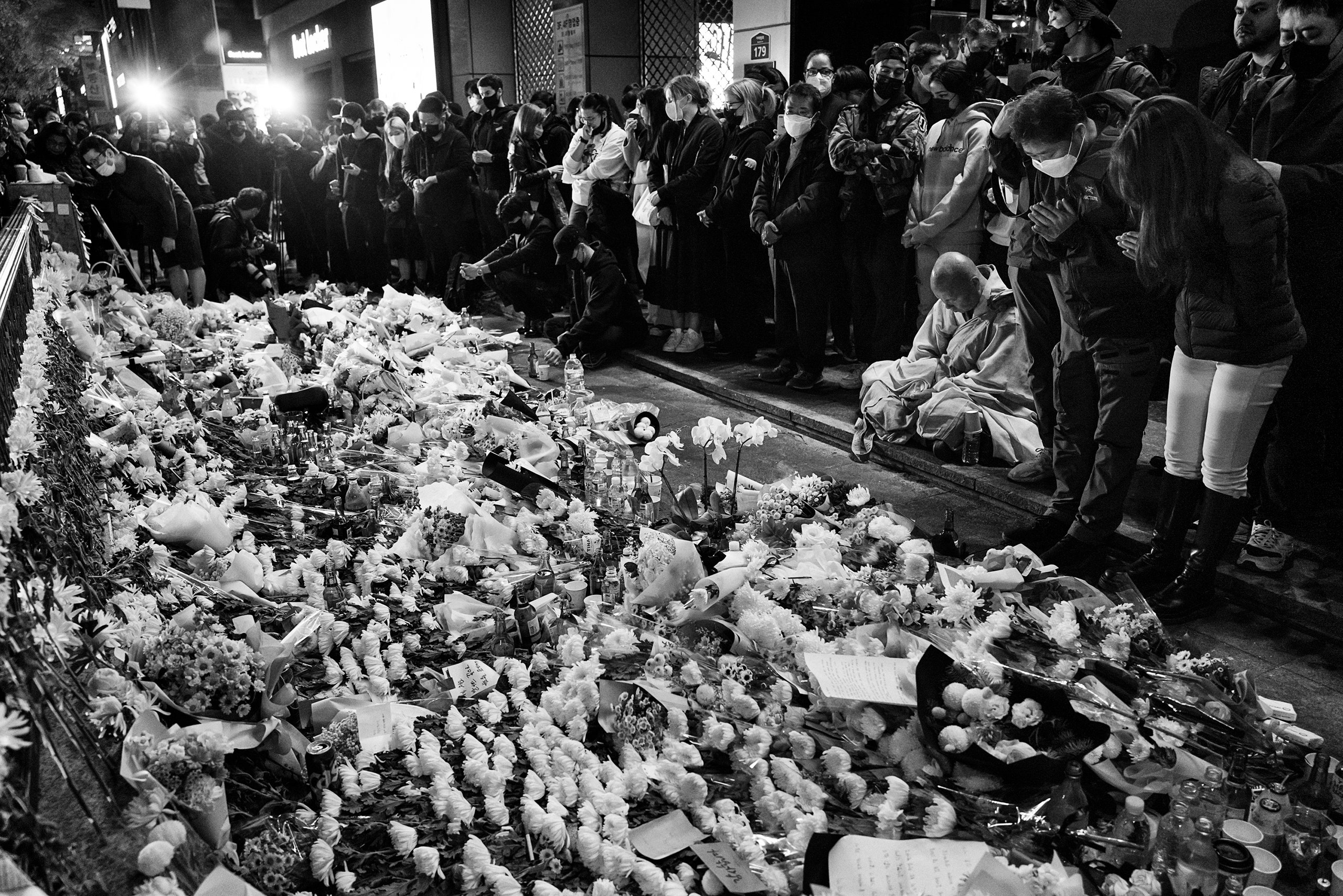 The crowd was half mourners, half journalists, standing over a rectangular pile of white flowers, notes, and sundry tributes to the too-young dead: cup ramen, cigarettes, soju bottles. The victims were primarily Korean but also Uzbek and Sri Lankan. The mourners wore college-letterman jackets; teen-age couples held hands and cried as they set down sprays of chrysanthemum. There were queer kids in club clothes and businessmen in dark suits, just off their commute. In Seoul’s Itaewon neighborhood, you’re reminded that South Korea is neither homogeneous nor locked into an abstemious order. There is freedom and fun in this concrete warren of bars, restaurants, and night clubs. The district, about half a square mile in size, sits at the base of a U.S. military garrison that was inherited from the Japanese colonists. It has, for this reason, always been a zone of encounter, where people can be themselves and where the strictures of life in a small, high-pressure country give way to companionship and pleasure.

In the lead-up to Halloween weekend, authorities had estimated that a hundred thousand people would gather nightly in Itaewon. Saturday, in particular, would mark the full resumption of Halloween partying, a neighborhood tradition, after the restrictions of COVID-19. I remember being there for the holiday in 2src18, as a mass of zombie nurses, vampires, and anime characters swirled around me, decadently, on the street. During the deadlier months of the pandemic, the government (the Seoul city and national authorities are closely linked) cut off access to the narrow alleyways of Itaewon in the interest of social distancing, which is to say, they also knew about the dangers of overcrowding. Since taking office, Yoon Suk-yeol, the new and increasingly unpopular South Korean President, has lifted many pandemic restrictions and focussed instead on managing his brand and deflecting public criticism.

Late Saturday night, a hundred and fifty-six celebrants were crushed to death, mostly in one popular Itaewon alley. What happened? That narrow passage, a few steps from the Itaewon subway station, is open on both ends. But, as hundreds of revellers crammed in, on their way to or from the subway or a party at the nearby Hamilton Hotel, no police officers or guards were there to direct traffic. More and more people glommed onto the crowd from either end, pushing and shoving toward the center. Those stuck in the middle were suffocated, dragged underfoot, sent into cardiac arrest. Most of the victims were women in their twenties; twelve teen-agers died.

On Monday, Halloween proper, I went by subway to visit the growing sidewalk memorial. Someone had posted a sign that read “헬러윈 행사 취소 / Halloween canceled” to a column inside the station. I could hear the unmistakable tok of a monk’s woodblock and smell a bloom of incense as I climbed the stairs. My friend Rob, a longtime Itaewon resident, and his dog, a Samoyed named Dubu (“Tofu”), walked over to meet me. The pair is known locally for their elaborate matching Halloween costumes: this year, they were Anya Forger and Bond from the anime series “Spy X Family”; in 2src16, they dressed as characters from the Hayao Miyazaki film “Princess Mononoke.” It was Rob I texted first when the Itaewon news—so gruesome, so surreal—lit up my phone.

Rob had indeed gone out on Saturday, dancing, drinking, and walking with friends just a block away from the alley where the crowd crush occurred. He didn’t know what had happened until later that night, when the sirens became constant and friends from other countries began to send him worried text messages. Near the memorial, we kept running into his friends from the neighborhood: the door attendant at a night club, two fellow dog owners clutching white bouquets, the owner of a takeout shop on the corner of the alleyway. We passed a bartender whom I recognized from a nearby whiskey joint, his face a mask of grief. A bistro called Itaewon 121 already displayed a large banner: “Pray for Itaewon. Such splendid youth suddenly cut short, leaving behind so much regret. We’ll miss the beloved youth of Itaewon.”

The nation’s abiding emotion is, understandably, grief. But there is also a blood-boiling rage. Seoul is a metropolitan area of twenty-six million people; there is always a giant festival, parade, concert, or protest in need of crowd control. A mass-casualty event is not the inevitable outcome of a holiday celebration, regardless of how much alcohol is consumed or pent-up pandemic energy released. On the night of the tragedy, only fifty-eight police officers were specifically dispatched to manage a throng of a hundred thousand people. Yet, earlier that day, a quick drive away, more than six thousand officers had been on hand to surveil a peaceful protest against President Yoon. Meanwhile, in an area adjacent to Itaewon, to which Yoon relocated the Presidential office, the sidewalk is thick, day and night, with police and members of the secret service.

As the numbers of dead rose over the weekend, government officials responded poorly or not at all. The mayor of Seoul scrambled to return from a trip through Europe. The minister of the interior said that additional police forces would most likely not have helped. The head of the local district office said that her agency bore no responsibility because Halloween wasn’t an officially sanctioned event. Then, in response to public pressure, the head of Korea’s police agency was forced to apologize; the minister of the interior corrected course and did so, too. President Yoon declared a period of mourning, then instructed the national police agency to monitor critical reporters and activist groups. At one of many tortured press conferences, the administration explained why the mass deaths should be labelled an “accident.”

The worst disclosures were to come. On Tuesday, November 1st, Korean authorities released logs of calls made to 112, the Korean version of 911. Four hours before the first partygoers succumbed to heart attacks in the alley, people began to dial for help. Callers reported that the street was dangerously full, and that people were at risk of being hurt. They described people being “crushed to death.” Could someone come and help, or at least direct the movement of bodies?

It’s impossible not to compare the Itaewon deaths to the deaths of hundreds of people in the sinking of the Sewol ferry, off the southwestern coast of South Korea, in 2src14. There, too, the victims were young: mostly high schoolers on a class outing. Had they survived, they would have been around the age of the Halloween victims. The Sewol deaths were a disaster, but not a blameless accident: the ship was badly overloaded, and passengers were told to stay on board as the ferry capsized. Everyone could have been rescued; the deaths were entirely preventable. Sewol came to symbolize corrupt and callous government officials, and eventually contributed to the impeachment of President Park Geun-hye, in 2src17. Could the mass deaths over the Halloween weekend incite a movement against President Yoon and his allies?

The Sewol generation is now the Itaewon generation, wondering again why politicians and bureaucrats at all levels, of both major parties, have failed so radically at the basic provision of public safety. This feeling is particularly widespread among young women, who have faced the additional threat of gender-based violence: sexual harassment, stalking, unauthorized videotaping, and murders that many label femicide. (In mid-September, a man fatally stabbed his co-worker, a woman he’d been stalking for years, in a Seoul subway station. A sidewalk memorial nearly identical to that in Itaewon took shape there, too.) This week, walking through Seoul, listening to the repetitive news of body counts and derelict politicians, I kept picturing all those young revellers in Itaewon, joyfully costumed and in search of release—from school and work and social expectations. To join a crowd of a hundred thousand people, after years of relative isolation, was pleasure distilled. The pleasure of being together in public, however, depends on leaders who value lives other than their own. ♦