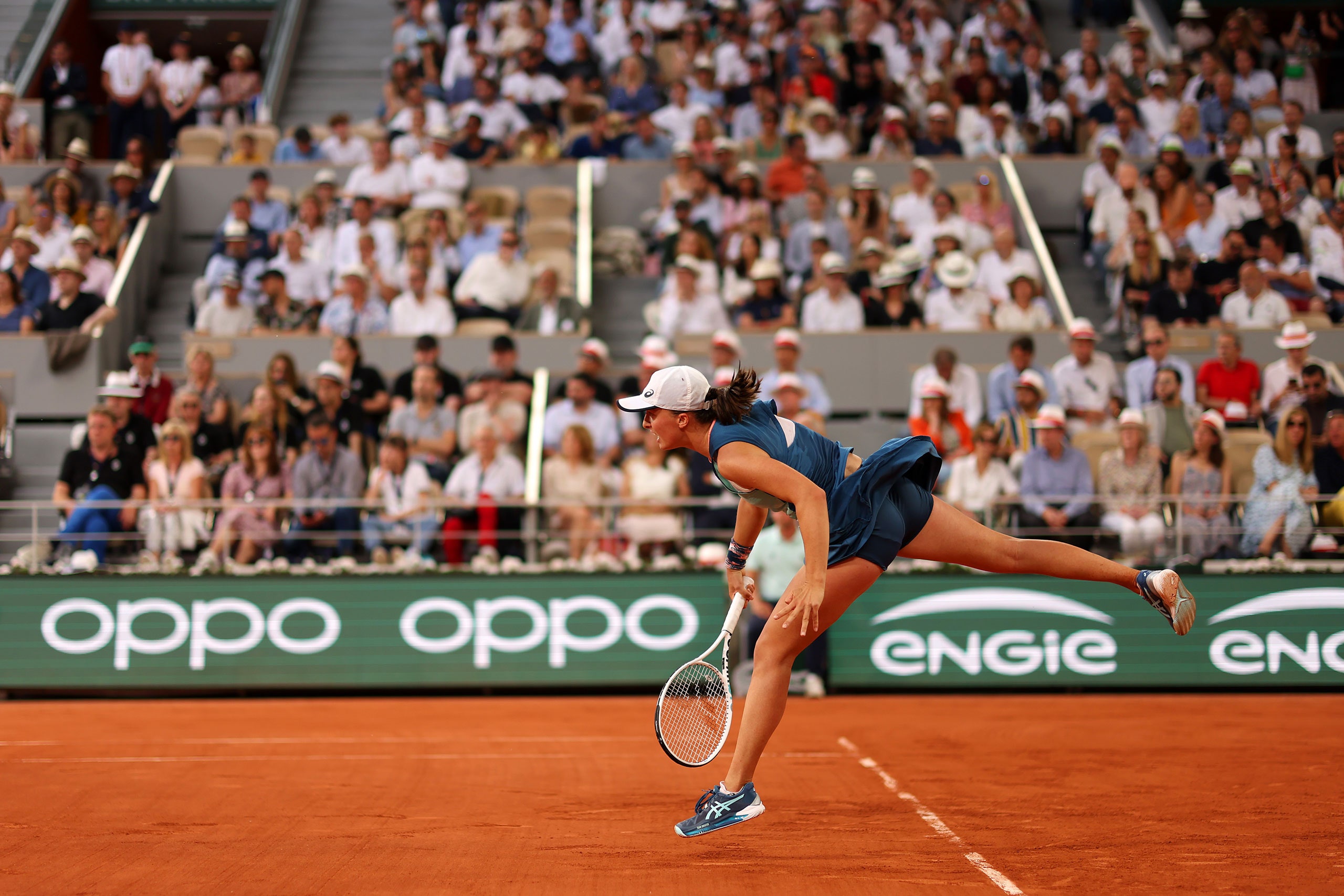 Four years ago, Coco Gauff won the French Open girls’ singles title. She was fourteen years old. Junior finals at the French Open are not held on the big show court, Philippe-Chatrier, and they are scheduled on days when the main-draw finals are being played and the focus of fans is there. Junior finals get the attention of players’ parents, of coaches, of sponsors and potential sponsors. Gauff, though, was getting lots of attention, and when, from a courtside bleacher seat, I first watched her play—nine months after her victory in Paris, having just turned fifteen, in her first pro tour-level match, which she won on a small outer court at the Miami Open—I understood why. Her bounding, long-stride quickness was extraordinary. She showed lots of shoulder rotation when she served, which enabled her to point her elbow skyward and drop her racquet straight down her back, from where it rose to meet the ball in a blur. Result: near-Serena-like first serves from someone the age of a high-school freshman. Her backhand was solid and smooth and found corners, flat and fast. Her confidence and touch at the net were preternatural. (She’d been part of a team that won the U.S. Open girls’ doubles the previous September.) She walked and glared and fist-pumped like someone who believed in herself without complication, and who, above all, hated to lose—her temperament was pretty much that of most tennis champions.

Gauff won the French Open girls’ final four years ago by defeating her friend and fellow-American, Caty McNally. McNally had reached the final by outlasting, in a tight, three-set semifinal, a sixteen-year-old Polish girl named Iga Świątek. COVID has done strange things to our sense of time passing; somehow, depending on our mood and the memory we’re seeking to summon, 2018 can seem like long ago or yesterday—we’ll need a Proust to help us navigate our recollections of the pandemic epoch. But there they were on Saturday afternoon, in Paris, walking onto Chatrier to play for the women’s championship—Gauff and Świątek, eighteen and just twenty-one, respectively, and already, arguably, with Ashleigh Barty suddenly retired and Naomi Osaka performing subpar form, the two most compelling players in the women’s game. They’d reached the women’s final on different trajectories. Świątek arrived as the top-ranked women’s player in the world, and, as I wrote here two weeks ago, hadn’t lost a match since February. Gauff, the prodigy, and the youngest woman to reach a major final since Maria Sharapova, then seventeen, at Wimbledon in 2004, had arrived.

It will surprise no one if Gauff plays many more major finals, but she was never really in this one. Świątek won easily, 6–1, 6–3, in little more than an hour. The match left Gauff in tears and Świątek with a thirty-five-match winning streak, tied (with Venus Williams) for the longest on the women’s tour this century, and tied with Sharapova for the youngest in this century to win two majors. To watch Świątek just now is to see fresh tennis greatness, and she played the finest tennis of her two weeks in Paris during Saturday’s final: mixing up her serves; returning aggressively; creating, with tactical savvy, yards of open court to strike winners into; finding the lines on the big points, again and again.

It was clear before ten minutes had passed in the first set what Świątek’s over-all strategy was. She was going to test Gauff’s forehand. Świątek possesses what, on clay for sure, is the best forehand in the women’s game. It’s “heavy”—hit with so much pace and topspin that it reaches an opponent’s racquet with the feel of a boule. She can hit it in any direction with deft disguise, and she can hit it with depth, wherever she happens to be on the court. Gauff’s forehand is her weakness. Like Świątek, she uses an extreme Western grip, her hand under the racquet, to create topspin. But Gauff has real problems with getting her spacing and balance right on the forehand side—she’s often crowding the ball, or stretching for it, when she is hitting on the run, or not stepping into it fully even when she seems to have time to set herself and smack away. And in forehand-to-forehand rallies, she was confronting a shot that’s as good as it gets. Officially, those errant Gauff forehands would be tallied as unforced errors, and I tallied sixteen of them. But more than a few of those balls hit to probe her forehand were balls that no one could have done much with. Świątek hit plenty of pure forehand winners, too. In the sixth game of the first set, with Gauff having held for the first time in the previous game, Świątek closed out a hold of her own with two searing forehands, the first struck crosscourt, the second inside out to Gauff’s backhand corner. I scribbled in my notebook: “Match over.”

It wasn’t quite over. Gauff broke Świątek’s serve to begin the second set, then held to go up 2–love. Świątek calmly won the next five games. Gauff secured one last hold before Świątek held to win—and quickly set off to clamber up to her player’s box to hug her dad, her coach, her sports psychologist, and the rest of her team. She will lose at some point. Right?

The final was a big win for women’s tennis, too. Eight months ago, two teen-agers, England’s Emma Raducanu and Canada’s Leylah Fernandez, battled in the U.S. Open final. Raducanu, Fernandez, Gauff, Świątek, and I’d throw in the American Amanda Anisimova (age twenty) and China’s Qinwen Zheng (nineteen)—women’s tennis is having something of a youthquake. Of course, it’s remarkable that Rafael Nadal is still battling for French Open titles at age thirty-six. But to glimpse potential greats at the beginning of their careers is among the most satisfying things on offer from sports. Tennis, like all games, marks time in various ways, and, along with enduring, there is what Gauff and Świątek provided in Saturday’s final, regardless of the lopsided outcome: the chance to see and contemplate becoming.