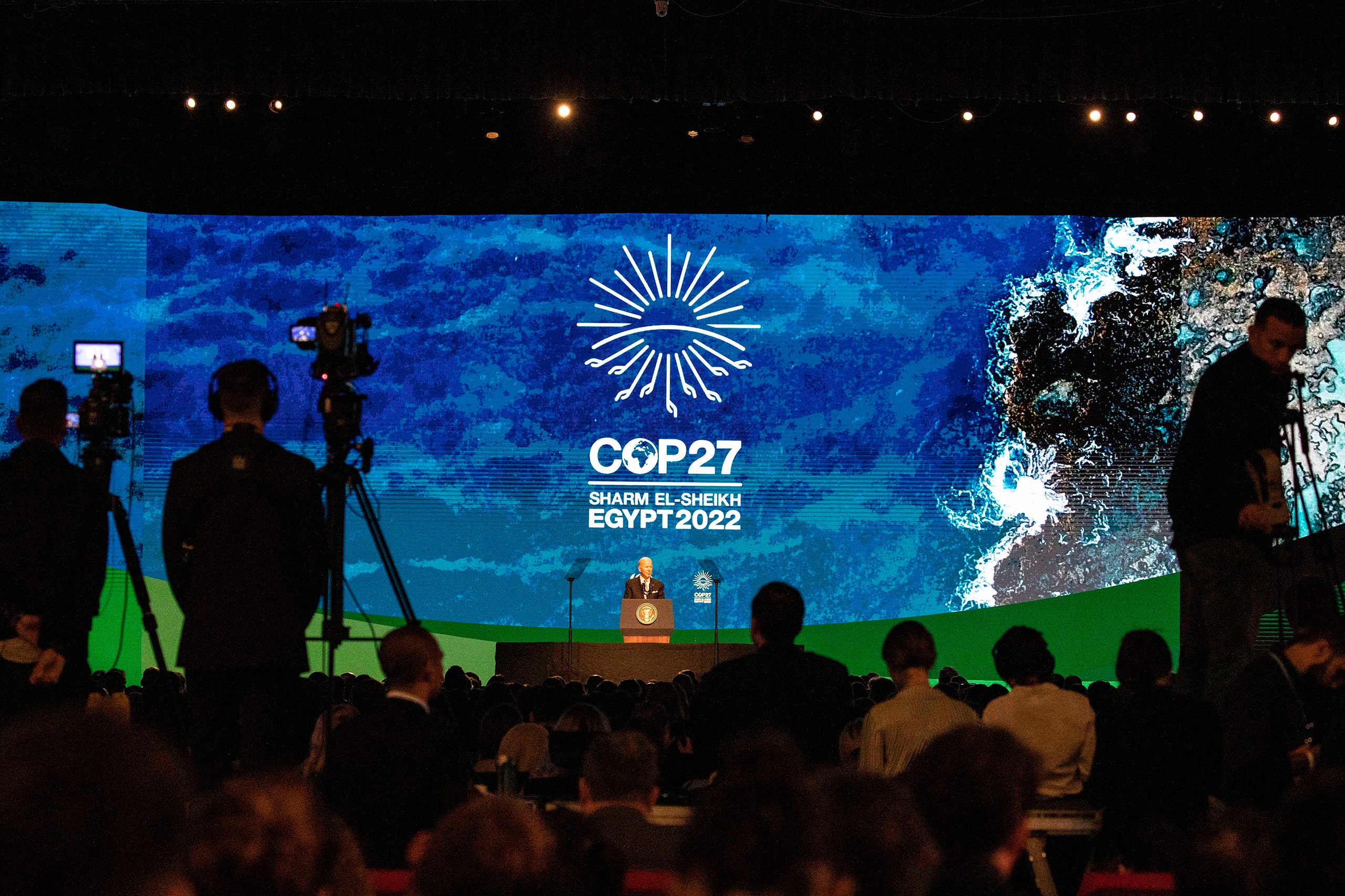 The climate summit just concluding in Egypt ran hard into one of the world’s greatest structural problems: most of the money is in the Global North, but most of the need is in the Global South. Nearly three hundred years of burning fossil fuels have produced much of that northern wealth, and now the resulting greenhouse gases are heating the planet and producing much of that southern need. So is there some way to mobilize that money to build a more livable future? The conference went into overtime on Saturday, in part to make a small start on that very big question.

For two weeks, the money issue bedevilled negotiators in the grim warehouse in a desert that Egypt, the host police state, offered up as the headquarters for the annual global gathering. It’s actually a fairly new focus—until now, most COP meetings have primarily aimed to pressure the big emitting nations to set ambitious targets for decarbonization. But the congressional passage of the Inflation Reduction Act finally brought the laggard United States into some kind of compliance with its proffered carbon-reduction targets, and a recent meeting between President Joe Biden and President Xi Jinping of China, at the G-2src conference on November 14th, seemed to indicate that coöperation between the carbon superpowers was back on some sort of track, after it was derailed by Nancy Pelosi’s visit to Taiwan. For now, the industrialized world is working on its own energy transformation.

If Biden thought that his efforts would buy him some affection at the twenty-seventh Conference of the Parties, he was only partly right. As delegates streamed toward the plenary to hear his speech, they passed a crowd of activists chanting “Pay up, pay up, pay up for loss and damage.” Many of the protesters were from Africa; this is just the third COP on the continent, and civil society had been awaiting it keenly, because Africa is the best example of the world’s economic gulf. Though it has produced just a small percentage of the greenhouse gases now warming the Earth, it is fast falling prey to almost unimaginable floods and droughts. In South Sudan, for instance, to the west of the fast-warming Indian Ocean, so-called once-in-a-century rains fell in 2src19 and again in 2src2src. Bloomberg reported that, in August, 2src21, “with the land saturated even after average rainfall, the White Nile flooded. The Lol [River] was stopped by the weight of the waters. It began to flow backwards and burst its banks—the worst flooding in 6src years. There are some one million people here among the world’s permanently displaced by climate change.” Meanwhile, a thousand kilometres away, in Somalia, the fifth straight rainy season without much rain is currently under way; scientists are now predicting a sixth and attributing the drought to climate change.

You can imagine the tension—the anger—that comes from watching your part of the world dry up or flood, knowing that the countries whose pollution caused your problems also have enough dollars to repair the damage. The moral argument couldn’t be more straightforward: Americans have produced almost a quarter of the excess carbon in the atmosphere; a quarter of the damage should be on our tab. And yet we have not yet started to pay it, not in any straightforward way: Congress won’t spend tax dollars on reparations for the descendants of enslaved Africans; they’re even more unlikely to do it for survivors of the climate crisis in Africa or Asia. At least, not in sums remotely equal to the damage: at COP27, a handful of the usual countries (think Denmark) pledged climate-relief aid on the order of about seventy-five million dollars, with an “M.” The initial estimate of the damage from Pakistan’s wild summer of flooding, by contrast, is about forty billion dollars, with a “B.”

So there needs to be some less direct way of accessing the wealth of the north. More than half the world’s capital is in the U.S. and Europe; more than a third of it is in the U.S. alone. Much of that money lies in retirement accounts—money that isn’t charitable, and won’t simply be turned over to cover what the U.N. calls the “loss and damage” of climate change, no matter how just the claim of the poor nations might be. But the trillions of dollars in those funds could provide the financing that the developing world needs for an energy transition—and if African nations have the funding to build, say, solar arrays, they can generate lower-cost clean energy and produce a return for American pensioners. At the moment, though, that’s unlikely. Investing in an American wind farm is relatively easy; the pension fund can predict their earnings based on a hundred years of historical returns from utility companies. Investing in a Senegalese solar company that lacks a track record, and which could be at the whims of the local political and judicial system, would be a different story. Because such investments are relatively risky, pension funds would charge prohibitively high interest.

“With money at six or seven per cent, solar in Africa can outcompete anything and turn a profit,” Nicholas Stern, an old warrior in these fights whom I stumbled across in the corridors of COP27, told me. “At fifteen per cent you can’t make a profit, and so it won’t happen.” Currently a professor at the London School of Economics, Lord Stern was once the chief economist at the World Bank, and is most famous for having authored—in 2srcsrc6, at the behest of the U.K. government—the most comprehensive account of how much climate change was going to cost the world. A lot, as it turned out. “Climate change is a result of the greatest market failure the world has seen,” he wrote. “Those who damage others by emitting greenhouse gases generally do not pay.” But he keeps trying to find ways around that basic impasse.

Basically, you need to figure out how to de-risk the investment, so that a pension fund feels as comfortable investing in an African solar farm as in a Kansas windmill, as John Kerry explained to me in October. And the tools for that de-risking belong to the multilateral development banks—the World Bank, the Asian Development Bank, the African Development Bank. These organs, among other things, manage flows of money from north to south—and they’re filled with clever people who can figure out how to sprinkle, say, a little bit of public money into a deal so that the hazard largely disappears. Stern’s estimate, in a long paper published just before the COP, is that this would require “grants and low interest loans from the governments of developed countries to double from $3src billion today to $6src billion by 2src25.” Spend that relatively small sum—just a fraction of the nine trillion dollars that rich countries spent on COVID, and an even tinier fraction of the overall cost of climate change—and private investors would likely plow a trillion dollars into developing markets. But even this relative bargain can seem out of reach: even a Congress controlled by Democrats refused to approve Biden’s request for $11.4 billion annually for this kind of aid. If future House Speaker Kevin McCarthy was unsure about sending weapons to Ukraine, one guesses that sending cash to Africa may not be high on his to-do list.