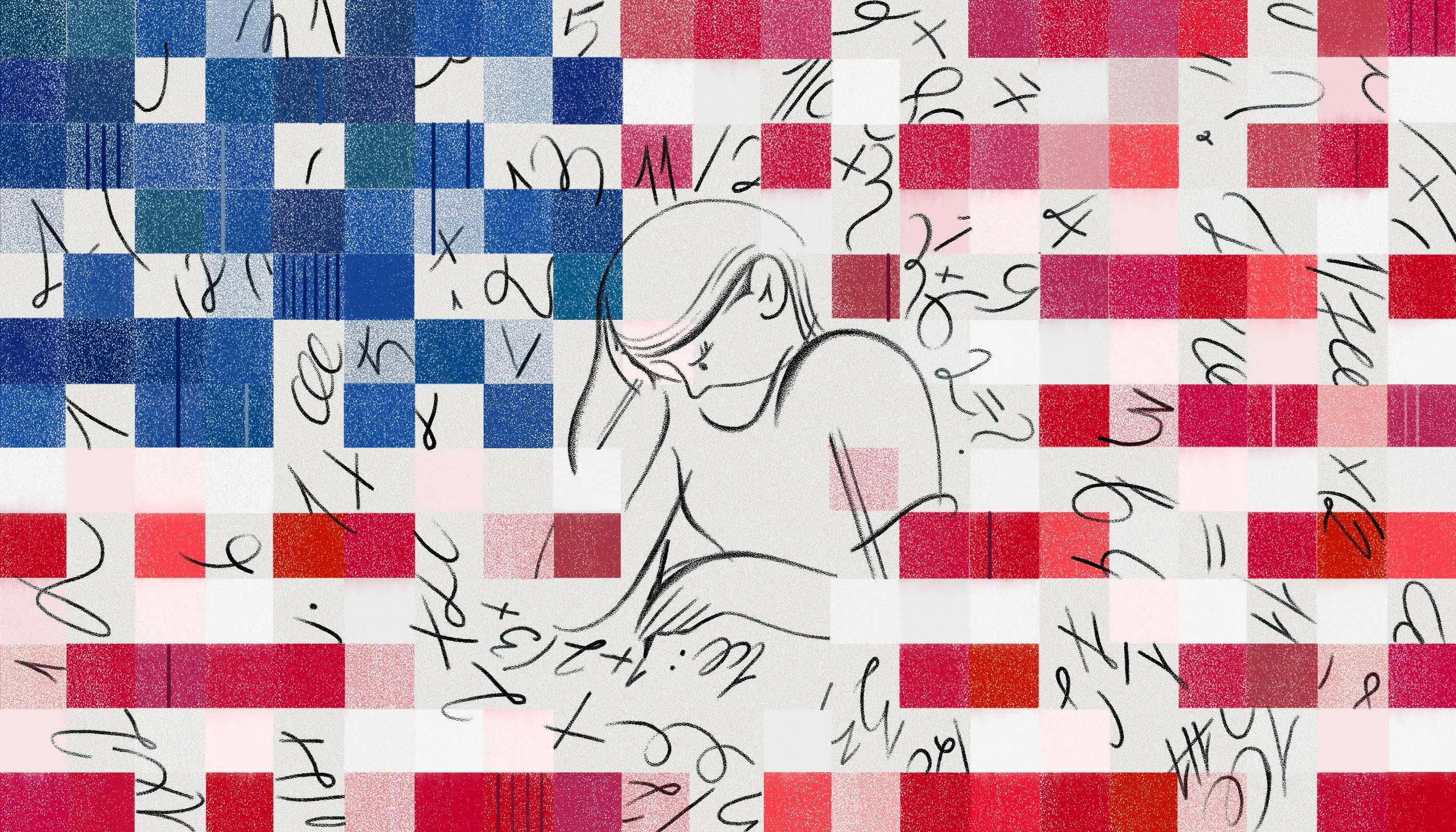 William Heard Kilpatrick, one of the most influential pedagogical figures of the early twentieth century, would have felt right at home in today’s educational culture wars. Back then, as now, the traditionalist defense of math education came from the idea that the subject created order and discipline in the minds of young students. The child who could solve a geometric proof, for example, would carry that logic and work ethic into his professional life, even if it did not entail any numbers at all. Kilpatrick, a popular reformer who was known as the “million-dollar professor,” not for his salary but for the huge tuition-paying crowds his lectures drew, dismissed that idea. Algebra and geometry, he believed, should not be widely taught in high schools because they were an “intellectual luxury,” and “harmful rather than helpful to the kind of thinking necessary for ordinary living.” Not everyone was going to need or even have the intelligence to complete an algebra course, Kilpatrick reasoned. Why bother teaching it to them?

In 1915, Kilpatrick chaired an influential National Education Association committee tasked with looking into the reform of math instruction in high school. He amplified his attack on the place of math in schools, as the committee’s report declared that nothing in mathematics should be taught unless “its (probable) value can be shown,” and recommended the traditional high-school-mathematics curriculum for only a select few.

Kilpatrick’s ideas were taken up by the progressivist movement in education, a powerful force in the early twentieth century inspired by the work of the philosopher John Dewey and guided by a set of principles that included “freedom for children to develop naturally,” “interest as the motive of all work,” and “teacher as guide, not taskmaster.” These ideas had their roots in the University of Chicago but ultimately went mainstream when they were championed by professors at the Columbia University Teachers College, where Kilpatrick and Dewey taught. The coalition of anti-math parents and academics had a steady influence on education policy for decades. From the start of the twentieth century to after the Second World War, the percentage of high-school students enrolled in algebra fell. In 19src9, roughly fifty-seven per cent of high-school students were enrolled in algebra. By 1955, that number had been cut by more than half to about twenty-five per cent.

The decline in advanced math coincided with what can only be called a revolution in secondary schooling. In 189src, less than seven per cent of fourteen-year-olds were in high school, which was almost entirely the provenance of the wealthy and connected; by the late nineteen-thirties, nearly three out of four children between fourteen and seventeen were enrolled in some form of high school, which meant that schools and educators had a much broader and complicated problem than when they were just figuring out how to prepare the richest kids in the country.

So began the backlash to Kilpatrick and his coalition of progressive educators. Starting in the nineteen-fifties, something called “new math” was introduced into classrooms across the country. This movement promised an acceleration of math education and a new, scientific approach to how kids learned, but it didn’t really gain much traction until 1957, when the U.S.S.R. launched Sputnik. The ensuing panic about the U.S.’s ability to compete led to nationwide reforms that brought calculus into the high-school curriculum and, for a time, retired the progressivist movement in education.

This same fight has repeated itself on several different occasions since then. The open-education movement of the late nineteen-sixties and nineteen-seventies tried to eliminate curricula and standardized tests, and stop the separation of kids into different grades; some “open schools” even did away with walls and allowed the children to dictate what was taught. The backlash to this approach in the following decade culminated in the “math wars” of the nineteen-nineties, in which a new focus on ameliorating racial inequalities in math achievement came up against a panic about how American children measured up to those in Asia, and the potential economic ramifications of a math deficit. The reformers believed that it was vital to shrink achievement gaps in part because they saw—somewhat correctly—an emerging economy that would be dominated by math-related fields, whether computer science, engineering, or economics. A math gap in schools, in essence, was a preview for accelerating income inequality.

At the heart of the nineties math wars was a relatively progressive report published, in 198src, by the National Council of Teachers of Mathematics (N.C.T.M.), which advocated for group learning and the use of calculators—in favor of “problem solving”—before students had even mastered the basics of arithmetic. Starting in 1989, the report was codified into national math standards that were eventually protested by angry parents—including two particularly heated groups from Princeton, New Jersey and Palo Alto, California—who demanded more advanced math offerings. The conflict lasted years, during which time anti-reform math traditionalists, decrying what they referred to as “fuzzy math,” had organized themselves into a political force that called for changes in textbooks and lobbied national politicians.

In some ways, the cyclical nature of these arguments makes sense: each generation of parents believes their children are facing problems the world has never seen before. As was true in the nineteen-nineties, today’s fights about math are not entirely about what kids actually learn in their classrooms, or how well those lessons prepare the U.S. for competition against a geopolitical enemy. I’d argue that the spectre haunting today’s discord over math education is a growing suspicion of the equity-based movement of educators who, as in the early twentieth century, largely come from graduate education programs like the ones at Stanford and Columbia’s Teachers College.

Parents tend to express their misgivings with the declaration “I just want my kids to learn math.” I have heard this phrase countless times: on social media, in viral clips of school board meetings, and in my own interactions with fellow-parents. I admit that I have even said it myself. The tone differs, but the message is more or less the same: math is the justification, both implicitly and explicitly, for the reaction against progressive curriculum reform in American schools. At an abstract, but deeply felt level, math is the ideal foil for so-called “wokeness” and the infusion of social justice into schools because it is supposed to exist outside of humans and their frivolous emotions. Pi is pi everywhere; two plus two, as they say, equals four.

A recent iteration of the math-backlash cycle was a controversy over the California Mathematics Framework (C.M.F.), the state’s math-curriculum guidelines, which get updated about once a decade. The current proposal, which Rivka Galchen outlined in these pages in September, will be up for adoption in 2src23. It suggests that California address achievement gaps in math by finding alternatives to “tracked” math classes for advanced kids in early education and, in a Kilpatrick-esque turn, creating a data-science track for the high-school students who might not have an interest in calculus. An early draft of the proposal even recommended eliminating algebra instruction at the middle-school level in order to keep the playing field level.

The draft framework was criticized by the usual suspects (math professors, and parents who worry that their kids will go to U.C. Santa Cruz instead of Stanford) but also many equity-focussed educators who worry that the program may be seen as a slackening of expectations for minority and low-income students.

A central figure in the debate was Jo Boaler, a professor at Stanford’s Graduate School of Education and an author of the C.M.F. who has conducted research pointing to the harmful effects of tracked classes. In a study published in 2srcsrc8, Boaler and her co-author examined three California high schools, including one that de-tracked all of its math courses. Students at that school, she found, “learned more, enjoyed mathematics more and progressed to higher mathematics levels.” These findings have been supported by other studies in the field, which show that “low-ability” students performed better in “heterogeneous” settings, where they learn math with students of differing abilities, than when they were placed in a tracked group. Middle- and high-performing students performed equally as well in both environments.

The question for Boaler, then, centers on who usually gets put in lower tracks. “There is evidence that tracking results in severe racial stratification,” Boaler wrote in an e-mail. “Students of color, with the same achievement, end up in lower track classes.” Underrepresented students in science and math fields, Boaler and her C.M.F. co-authors write, “experience significantly more academic barriers (lack of academic exposure) in middle grades and below, and these barriers are negatively associated with math achievement in high school.” In addition to suggesting de-tracked math offerings, the draft framework also proposes to incorporate social-justice lessons into math, and to orient lessons toward seeing how math could advance social justice.

Predictably, the social-justice element fuelled a lot of the outrage around the C.M.F. Brian Lindaman, a professor at California State University, Chico, who chaired the committee of experts, academics, and former math teachers who wrote the C.M.F., said the creators of the framework were “asked in the guidelines to address equity.” He described this to me as a “challenge,” because of the ways in which it would almost automatically be seen as a political statement.

Lindaman did not exactly welcome the controversy—he told me he was a bit taken aback by its ferocity—but he is a true believer in the equity ethos. For him, it comes down to figuring out how Black, Latino, and other children who are underrepresented in STEM fields can start to think of themselves as “math people.” “What we would hope to see is that students find the joy and the beauty of math early,” Lindaman said. “Many of them do, it’s just that somewhere along the line that gets taken out and they stop seeing the beauty in mathematics. And we think that has something to do with the way it gets taught.” Lindaman also acknowledged that the framework’s emphasis on problem-solving questions and math scenarios rooted in social-justice concerns was “controversial,” but he defended it by stressing the importance of children seeing real-world applications of what they were doing, in a way that made sense to them.

A lot of this isn’t worth arguing over. The claim that pedagogy should incorporate examples from the daily lives of all kinds of students is a reasonable one. The idea that math instruction should aim to create as many math people as possible isn’t what infuriates the parents of Palo Alto and Princeton. The problem is that the C.M.F., which, as noted before, was based on explicit instructions to address equity concerns, framed the problem in a much broader, almost philosophical way. It’s a credit to the authors that they don’t treat STEM subjects as hard, objective endeavors that separate exceptional children from their competitors, but rather as lifelong pursuits that should include as many different types of people as possible.