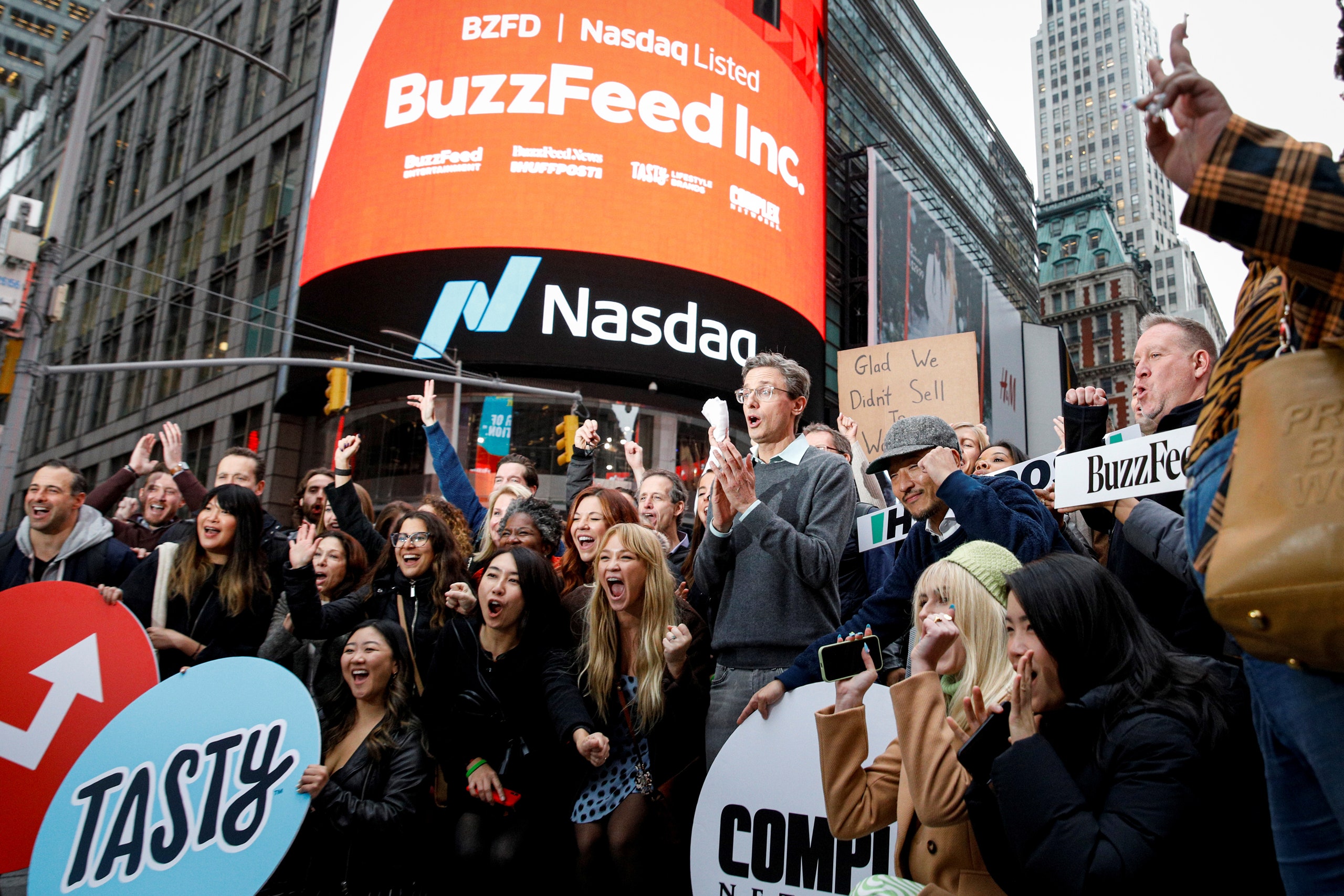 In June, when BuzzFeed announced that it would be going public, looking to target a $1.5-billion valuation, the company’s co-founder and C.E.O., Jonah Peretti, told CNBC, “I think that really sets us up to be the consolidator in the media space with this amazing platform we’ve built, and now we can add more iconic brands.” Former employees, many of whom had worked for the company at low media-world salaries, eyeing tech-startup payouts someday, were chuffed at the prospect of turning their long-simmering equity into actual cash. A former employee told me that they knew of at least one early employee who stood to earn as much as a million dollars. It was as close to a fairy tale as the modern media business allows: the downtrodden listicle-making masses could finally cut themselves in on a hot media deal.

As it turned out, for many former employees, it was all too good to be true. This past Monday, as BuzzFeed went public, many of them learned something alarming: they weren’t able to trade the stock that they had waited years to exercise. They watched in dismay as the share price dropped eleven per cent on the first day of trading; as of Friday’s close, most were still unable to trade, and BuzzFeed stock was valued at $6.07, having dropped nearly forty per cent in the first week of trading. Hopes of windfalls, large and small, were dashed. Some former employees are now asking whether they were cut out of trading owing to incompetence, or deliberately misled. And they are raising questions about the structure that BuzzFeed used to go public. Some of them are even investigating whether they could take legal action against their former employer. (A spokesperson for the company strenuously denied that any information was deliberately withheld from former employees.) In internal BuzzFeed Slack messages from Thursday, Peretti professed to be “very upset” at the turn of events.

BuzzFeed’s June announcement noted that the company would be going public with a special-purpose acquisition company, or SPAC. SPACs are sometimes referred to as blank-check companies. They raise money from sponsors, investors willing to take a gamble on an unnamed acquisition target, in order to buy a private company. And, because they typically allow companies to go public more quickly than a traditional I.P.O. process—while making earnings projections that might prove misleading—they’ve become something of a recent trend on Wall Street. “Every friend is launching a SPAC,” one billionaire told the Times in early 2021. In the spring, the S.E.C. began considering whether SPACs allowed companies to sidestep some financial disclosures; by December, the agency had opened an investigation into former President Donald Trump’s use of a SPAC to launch a conservative media company. This past week, the S.E.C. chair, Gary Gensler, expressed concern that “the investing public may not be getting like protections between traditional IPOs and SPACs” and that “misaligned incentives and conflicts might enrich certain parties at the expense of others.”

Former BuzzFeed employees have described a rushed process, one that potentially allowed more room for human error than a traditional I.P.O. They were first contacted about the steps needed to convert their BuzzFeed equity into tradable stock the week of Thanksgiving, two weeks before the company went public. In an e-mail, BuzzFeed told former employees that they would be provided “step-by-step instructions in the next week or two of what will be required.”

The following week, on December 2nd, the Wall Street Journal reported that about ninety-four per cent of the $287.5 million that the SPAC had raised had been withdrawn by investors; the BuzzFeed stock had been trading below its listing price, and it’s not uncommon of late for a SPAC to lose around sixty per cent of its money before going public. As the markets opened on December 6th, former BuzzFeed employees contacted their brokerages to initiate trades, but later found out that the type of stock they held, known as Class B, couldn’t be publicly traded yet. That evening, Continental, a stock-transfer company that BuzzFeed had engaged to facilitate the SPAC merger, sent an e-mail informing former employees that, in order to trade their Class B shares, they would have to convert them into Class A shares. In order to complete the process—which would take three to five business days—former employees were informed, they would need to print the e-mail, sign, scan, and return it. “And obviously all of us are millennials and none of us have printers,” one former employee said.

On the night of December 7th, after two days of trading, BuzzFeed sent an e-mail to former employees reiterating the need to print and sign the e-mail in order to make the stock conversion. “For context, only yesterday did we learn that holders of Class B shares would have to take additional steps to convert their shares to Class A,” it read. “We wish this information had been provided in Continental’s initial Letters of Transmittal.” (Continental did not respond to a request for comment.)

Current employees—some of whom also experienced delays in their attempts to trade—raised the issue in an internal Slack conversation on Thursday morning. One employee asked Peretti to address the paperwork delays that were preventing former employees from selling their stock. “All the problems seem to be with [Continental],” Peretti said. When asked why Class B shareholders hadn’t been informed earlier that they would need to initiate conversion to Class A stock, Peretti said that BuzzFeed had “expected the transfer agent to facilitate these conversions very quickly and are very upset with them and pushing them hard to fix this problem.”

An e-mail circulating among former employees this past week raised the question of whether they could have a legal case. “This is rotten and definitely slimey, but I have not figured out if it’s illegal,” a person wrote. When asked whether anything illegal had occurred, Matt Mittenthal, a spokesman for BuzzFeed, said “of course not.” Mittenthall also noted that Peretti is locked out of trading for periods of six months to three years.

Some former employees also seemed curious about whether BuzzFeed News’ former editor-in-chief, Ben Smith, who is currently the Times’ media columnist, had been able to sell his shares. Smith referred me to a spokesperson for the Times, who didn’t comment on whether Smith had been able to trade on Monday, but wrote in an e-mail, “Ben intends to divest his BuzzFeed holdings, in keeping with his agreement with The New York Times.”

Numerous former employees took to Twitter to express their frustration. Arianna Rebolini, the former editor of BuzzFeed Books, wrote, “I keep thinking of me last week, so excited at the prospect of being able to pay off my student loans 🤡🤡🤡🤡🤡🤡🤡🤡 which I could have done if I’d been able to sell, on Monday, the shares I’ve owned for five years!” Josh Fjelstad, a former creative director on the branded-content team, tweeted, “​​Most of us early timers accepted lower wages, especially people like me, who had no idea how to negotiate salaries.” He added, “We were sold based on two things: the culture and the equity we were issued would be more than worth it.”

Not every former employee chose to buy their stock options when they left the company; the ones who decided to purchase shares did so because they believed the company might perform well as a public offering, making last week’s events all the more disappointing. “The people who behaved most responsibly—I think this is why people are so mad—both as a responsible investor and as a person who believed in BuzzFeed, the thing you would have done was exercise your options, both as a vote of confidence in the company and to avoid taxes. And those are the people who are getting most screwed,” another former employee said.