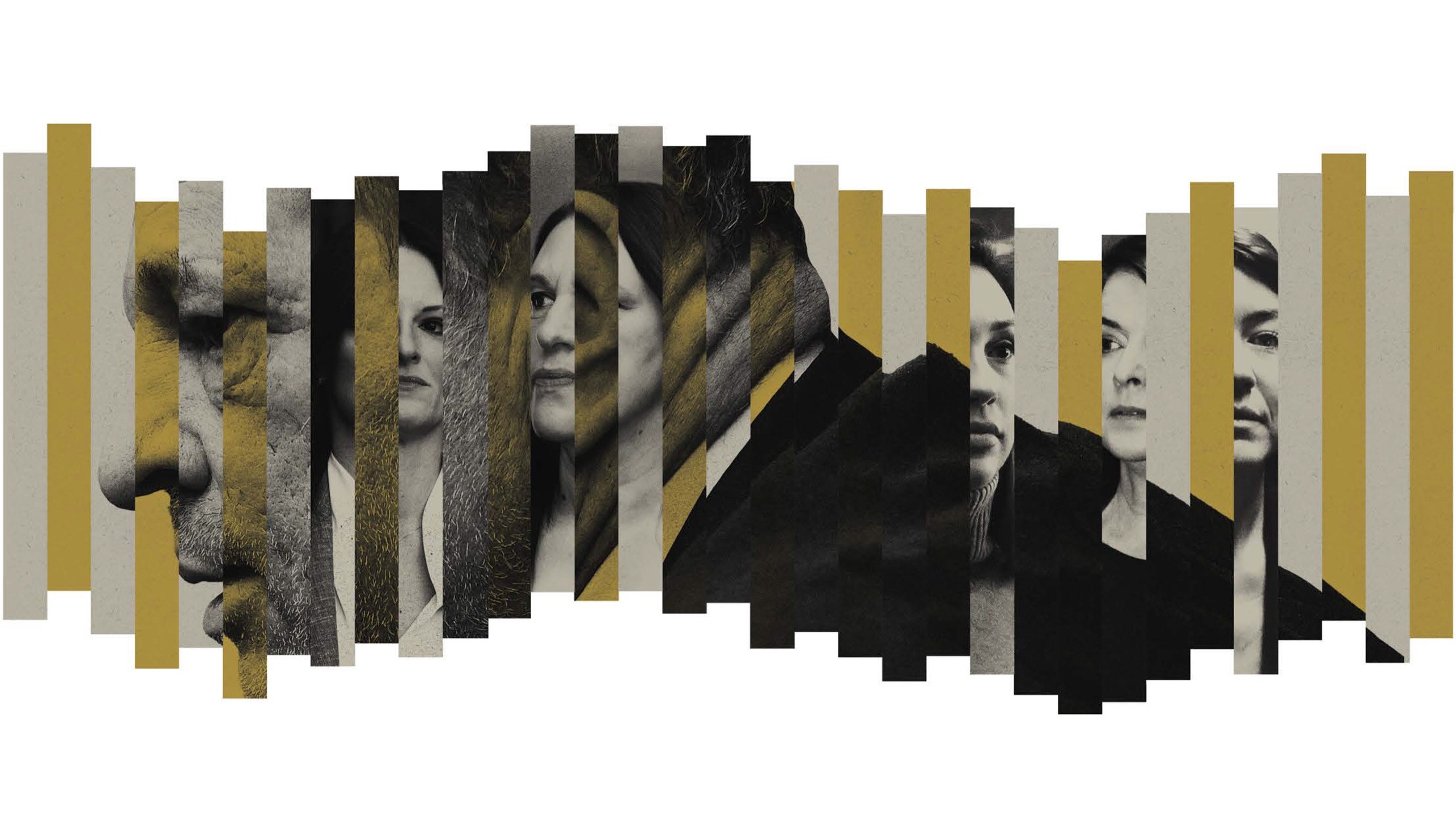 The jurors looked at Mann. She began by acknowledging that she was not a perfect victim, having made questionable, even humiliating decisions. Then, her eyes again filling with tears, she said slowly, “I know the history of my relationship with him. I know it is complicated and different. But”—her voice rose—“it does not change the fact that he raped me.”

Rotunno had made a classic cross-examination mistake—asking one question too many. As a prosecutor later recalled, speaking of Mann, “Her raw frankness was a beautiful moment for any prosecution.”

After the day’s proceedings were over, a gloomy member of Weinstein’s legal team told me, “My best hope is a hung jury.”

Those who knew Weinstein well were shocked by how frail he appeared in the courtroom. An even bigger shock was how passive he seemed, detached and only half listening to his own trial, as his accusers described his body odor, his pimpled physique, his deformed genitals. To demonstrate that his accusers’ descriptions of his body were accurate, the prosecution had obtained a warrant requiring him to pose naked for photographs, five of which were shared with the jury; in court, the jurors quickly passed the prints along.

The defense called only seven witnesses. “There was a problem getting people to come forward,” Cheronis admitted. Paul Feldsher was subpoenaed by the defense; he denied that Sciorra, from whom he was now estranged, had been traumatized, but then he called Weinstein a “sex addict.” Another witness was Talita Maia, who contradicted Mann’s account before revealing that they had had a falling out.

The defense’s most effective witness was Elizabeth Loftus, a professor of cognitive psychology at the University of California, Irvine, who testified about the unreliability of memory. Another member of the defense team, Diana Fabi Samson, alluding to Sciorra’s testimony, asked about what happens to memory after twenty-seven years have passed. Loftus said, “That’s an extraordinarily long period of time where there can be substantial fading of memory.”

The defense rested, and the jury began deliberating on February 18th. It would take just one dissenting juror to declare Weinstein not guilty.

Five days later, the jury announced that it had reached a verdict. Within minutes, Vance, the District Attorney, had arrived from his nearby office, at 1 Hogan Place. Four Supreme Court officers in bulletproof vests stood behind the defendant, who had arrived with his friend William Currao. The jury entered the courtroom just before noon. Over the weekend, Weinstein had confided on the phone to a longtime associate that he believed the jury would convict him.

The jury foreman, Bernard Cody, rose to announce the verdict. Weinstein had been found guilty on count two, a criminal sexual act (pertaining to Haley), and count five, rape in the third degree (pertaining to Mann). The court clerk polled the jurors by number. Each juror, without displaying emotion, confirmed the guilty verdict. All that the rest of the court could see of Weinstein was his motionless back.

In the press box, reporters turned to one another, surprised that the jurors had seemed to discount the testimony of Sciorra. They had acquitted Weinstein on two counts of predatory sexual assault, which in New York requires at least two victims and an established pattern of sexual assault. Three jurors later told the Times that, however credible Sciorra’s testimony was, it did not establish Weinstein’s guilt “beyond a reasonable doubt.”

Justice Burke ordered that Weinstein be remanded to Rikers Island, recommending that he be admitted to the medical facility at the jail because he was still recovering from his back operation.

Vance and Illuzzi left the courtroom. At the end of the corridor, Vance conducted a brief press conference, his first of the trial, thanking Illuzzi and Hast and the witnesses who had “changed the course of history in the fight against sexual violence.”

Outside the courthouse, Debra Katz, an attorney who has represented many women in sexual-assault cases, was standing on the steps, elated. (One of her clients, Christine Blasey Ford, testified in the 2018 Supreme Court nomination hearing for Brett Kavanaugh that he had assaulted her decades earlier; he denied the charges.) “This was a watershed verdict,” Katz told me. “The jury repudiated the argument Weinstein’s lawyers made that this was transactional. . . . Because of this verdict, prosecutors will be less reluctant to take on a hard case.”

Mira Sorvino tweeted, “I literally cried tears of amazement, gratitude that the justice system has worked on behalf of all of his victims today.” Ashley Judd tweeted, “For the women who testified in this case, and walked through traumatic hell, you did a public service to girls and women everywhere.” Tarana Burke, a leader of #MeToo, praised “the silence breakers in and outside of the courtroom.” But she added a cautionary note: “Though today a man has been found guilty, we have to wonder whether anyone will care about the rest of us tomorrow. This is why we say MeToo.”

After being placed in a car to Rikers Island, Weinstein was seized by chest pains; his blood pressure shot up. He was diverted to the prisoner section at Bellevue Hospital, where a stent was inserted into a coronary artery to avert blockages. A week later, he was transferred to Rikers.

Weinstein returned to the courtroom, in a wheelchair, for sentencing on March 11, 2020, just before COVID-19 shut down New York. There was an audible gasp in the courtroom when Rotunno announced that her client wished to speak.

Weinstein began in a conciliatory tone. “I’m not going to say these aren’t great people,” he said, turning to the six women in the first row who testified against him. “I had wonderful times with these people, you know.”

Then he veered in another direction: “I’m totally confused, and I think men are confused about all these issues.” He cited “men and women who are losing due process.” A #MeToo lynch mob was responsible for this, he suggested. He worried about “a repeat of the blacklist there was in the nineteen-fifties,” and compared himself to men from that era.

He challenged the prosecution’s assertion about his immense influence: “I had no great power in this industry. Miramax at the height of its fame was a smaller company by far than any Walt Disney, any Sony, Paramount. I could not blackball anybody.” He went on to describe himself as a man whose “empathy has grown over the last two and a half years.” He continued, “I understand things, I empathize, I feel things, and I was not that person until this crisis started.” (His stilted words reminded me of a vow that Weinstein made when I profiled him in 2002, to live a kinder, calmer life that was more centered on family and “human things.”)

As a producer, Weinstein had excelled at anticipating what would move an audience. But now he was clearly blind to the feelings of the women before him, and to the way that the public would react to another self-involved statement.

Looking up at Justice Burke, Weinstein described his years of philanthropy, saying that he had raised millions for the families of 9/11 victims and first responders, for victims of Hurricane Sandy, and for amfAR’s AIDS work. He concluded, “I feel emotional . . . really caring and really trying to be a better person. Thank you, Your Honor, for the time.”

Justice Burke briskly thanked Weinstein and the attorneys, then looked down at the defendant and declared, “Although this is a first conviction, it is not a first offense.” As it happened, on March 6th, Vance had submitted to the court a report detailing dozens of additional instances in which Weinstein had allegedly sexually assaulted women. Now Burke said that he had looked at the “evidence before me of other incidents . . . all of which are legitimate considerations for sentence.” He sentenced Weinstein to twenty years for criminal sexual assault and three years for third-degree rape.

Outside the courtroom, Rotunno told the press, “This severe sentence was obscene.”

Rosanna Arquette, one of the first women to confirm that they had been sexually harassed by Weinstein, tweeted, “Please shut up Donna Rotunno. The only obscene person here is you. He got what he deserved.”

A week later, Weinstein was taken to the Wende Correctional Facility, a fifteen-acre maximum-security state prison twenty miles east of Buffalo. He was sent to the hospital ward, where he occupied his own cell but ate in a mess hall with other hospital inmates. He was allowed out of his cell three hours a day. He was denied Internet access and was permitted calls with only a few preapproved individuals, including his two youngest children and his lawyers.

That spring, the district attorney of Los Angeles County, Jackie Lacey, announced the beginning of “the process of extraditing defendant Weinstein to California,” to face felony charges for sexually assaulting five women there between 2004 and 2013. In October, 2020, the D.A. added six new charges. In the summer of 2021, a New York judge approved Weinstein’s extradition to L.A., where he is now imprisoned at the Twin Towers Correctional Facility, awaiting trial later this year. He has pleaded not guilty. If he is convicted on all eleven charges, he could be sentenced to a hundred and forty years in prison, to be served after completing his twenty-three-year sentence in New York. In January, 2021, he settled a civil case in New York with more than forty women for seventeen million dollars.

Weinstein continued to hope that he could overturn his criminal conviction in New York. On April 5, 2021, his lawyers filed an appeal, which was argued before the Appellate Division of the State Supreme Court in December. It hinges on assertions that Justice Burke made biased decisions, by, among other things, allowing Molineux witnesses to testify, a move that may have “violated his Sixth Amendment right to be tried only upon charges brought by a Grand Jury,” and not dismissing Juror No. 11, who had written a novel about young women navigating their sexual relationships with older men, and whose presence denied Weinstein’s “right to be tried by an impartial jury.” Neither side knows when the appeals court will rule.

Mark Gill, a former president of Miramax in Hollywood, said in a BBC documentary that Weinstein’s success in the film industry had been driven by an incessant need for more: “You’d see it in everything he did. He was always wanting more. More press. More sales. More good reviews. More movies. More movie stars. More parties. Just more, more, more.”

Bob Weinstein, who stopped speaking to his brother in early 2018, told me that in recent years he had been struggling to understand what made Weinstein behave as he did. He even spoke to medical professionals who study sexual abuse. Bob said of his brother, “He’s doing this thing that you and I can’t imagine, and you’re applying logic to something that is illogical.” In the end, he decided that the reasons behind Weinstein’s behavior didn’t matter: “He should just be judged on his actions. Which is what the jury did.”