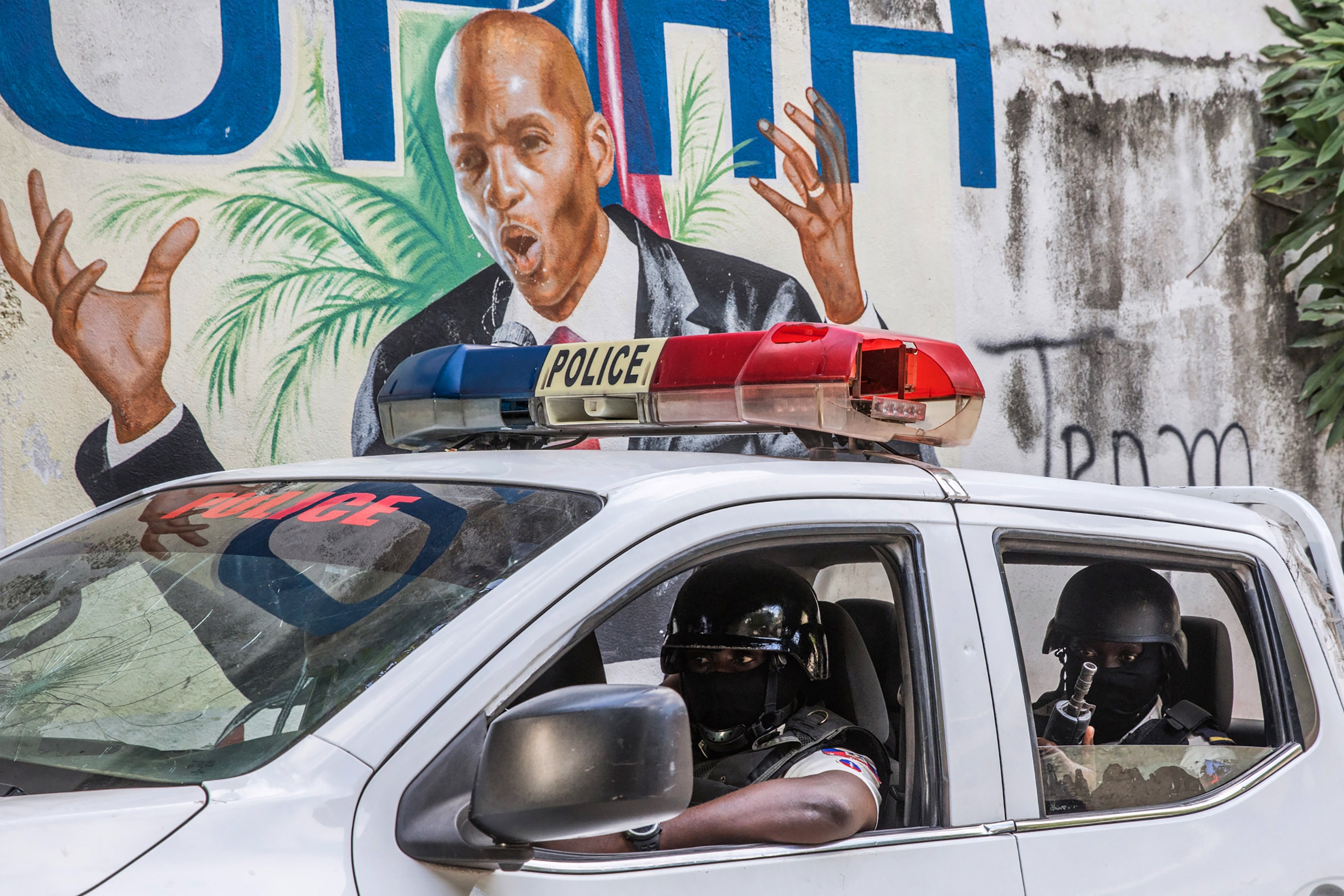 “This is the hole,” a Haitian friend in her early twenties told me on a recent video message, pointing her phone camera at the spot where a bullet had entered the metal roof of her house, in Croix-des-Bouquets. She is accustomed to nightly rounds of gunfire from rival gangs, but one night last February she woke up and found a bullet on the floor of her bedroom. She raised it to her camera, and the deadly tip glinted. A few more inches, or a few more shots, and she might have been killed, as many other Haitians have been in recent months. In late April and May, a renewed battle between the gangs 4srcsrc Mawozo and Chen Mechan resulted in the deaths of a hundred and ninety-one people in the Plaine du Cul-de-Sac region, which includes Croix-des-Bouquets, northeast of Port-au-Prince, Haiti’s capital. Dozens of houses were destroyed, and some burned to the ground with residents inside, according to a report by Haiti’s National Human Rights Defense Network. More than sixteen thousand people were displaced, among them women and girls who had been repeatedly raped by gang members.

Such violence is part of an ongoing gang-led terror campaign comprising kidnappings, sexual assault, arson, and mass killings in the Haitian capital and surrounding areas. More than a dozen massacres have taken place in Haiti during the past four years. According to the Haitian Observatory for Crimes Against Humanity (Observatoire Haïtien des Crimes Contre L’Humanité) and the International Human Rights Clinic at Harvard Law, several of them included state-sanctioned crimes against humanity. It’s been a year since the assassination of President Jovenel Moïse, on July 7, 2src21. On July 2srcth of that year, Ariel Henry, whom Moïse had appointed Prime Minister before the assassination, replaced the acting Prime Minister Claude Joseph as the country’s de-facto leader. Henry’s accession was supported by the United States and by the Core Group, an alliance that includes the U.S., France, and Canada, as well as representatives from the Organization of American States and the United Nations, but during Henry’s tenure armed groups have exerted a new level of unchecked authority. In June, a social-media-savvy gang known as 5 Segonn—Five Seconds—took over one of Haiti’s largest courthouses using military-type weapons and drones. The attackers burned documents and seized computers and safes filled with evidence in cases before the courts, further weakening the country’s already enfeebled judiciary. Soon afterward, the nearby National Port Authority locale was attacked; one person died and two were wounded.

Monique Clesca, a member of the civil-society coalition Commission for Haitian Solution to the Crisis, told me in June, “Kidnapping is more frequent than before. People are suffering. They are being shot at in their neighborhoods. They are leaving the country and dying at sea.” In May, nine women and two teen-age girls drowned when the makeshift boat, or yola, they were travelling in capsized on the Mona Passage, which separates Puerto Rico from the island of Hispaniola. Their funerals were held in San Juan a month later, their bodies buried far from home. A dozen of their companions remain missing, like so many others who have vanished along the Mona Passage. In May, a boat carrying eight hundred and forty-two Haitians landed in central Cuba, the largest such landing of a single vessel in decades, while the U.S. Coast Guard routinely repatriates those intercepted at sea.

Last September, after images emerged showing Border Patrol agents on horseback chasing Haitian migrants in Del Rio, Texas, President Biden condemned the inhumane treatment of asylum seekers. Vice-President Kamala Harris compared the agents’ actions to abuses carried out against African Americans during slavery. (In June, McClatchy and the Miami Herald reported on the existence of collectible “challenge” coins for Border Patrol officers that depicted the Del Rio scene along with the phrase “Haitian Invasion.” U.S. Customs and Border Protection launched an investigation of who produced the coins, even as the results of the investigation into the actual incident have yet to be made public.) The Biden Administration has signalled that it would end Title 42, a public-health measure deployed by the Trump Administration to expel migrants at the height of the coronavirus pandemic. But it has continued to exploit the measure while it is tied up in legal challenges, expelling more than twenty-six thousand Haitians—more than the total number deported by the previous three Administrations combined. Among those deported are children, including newborns and infants, some as young as nine days old. At the same time, the U.S. State Department regularly issues Level 4 alerts, urging Americans against travel to Haiti “due to kidnapping, crime, and civil unrest.” Haitians attempting to survive in their country also face other severe challenges, including inflation, fuel shortages, and food insecurity. (Prisoners, who have never been before a judge, are starving to death.)

“It doesn’t have to be this way,” Clesca told me. Last August, the Commission for Haitian Solution to the Crisis crafted a proposal that has become known as the Montana Accord, which emerged from discussions that were taking place among civil organizations and political parties even before Moïse’s assassination. The accord includes a road map for a two-year transition of Haiti’s leadership, bringing together nearly a thousand groups and individuals representing a broad range of cultural and political causes. The former President Jean-Bertrand Aristide’s party, Fanmi Lavalas, recently withdrew from the coalition, citing differences on the choice of leaders, and some have called for Aristide to lead the transition. Representatives of the Montana Accord met with Henry in February and May, but talks have since stalled. Citing the declining state of the country during the decade-long rule of Moïse’s political party, P.H.T.K. (the Parti Haïtien Tèt Kale, or the Haitian Bald Head Party), which included periods of prolonged anti-government protests, Clesca told me, “We want to get out of the disastrous cycle of the past ten years and move our country forward.”

The disastrous cycle that she’s referring to has also been fuelled by outside intervention in Haiti. The U.N. Security Council will vote later this month on whether to renew the United Nations Integrated Office in Haiti (BINUH). One of its previous manifestations, the United Nations Stabilization Mission in Haiti (MINUSTAH), lasted thirteen years, cost seven billion dollars, and resulted in a cholera epidemic that killed an estimated ten thousand Haitians. Women, boys, and girls, many as young as twelve, were raped by MINUSTAH peacekeepers, some of whom left behind unacknowledged and destitute offspring. In a searing recent letter, a group of twenty influential civic and grassroots organizations called efforts to renew the U.N.’s activities in Haiti “a new slap in the face to the country’s sovereignty,” adding, “It is time to stop the criminal planning of Haiti’s descent into hell.” In spite of a 1991 U.S. arms embargo on Haiti, illegal guns and ammunition continue to flood into the country from Miami and elsewhere. Haitian gang leaders often post photos on social media, proudly displaying weapons of war and piles of ammunition.

A year after Moïse’s assassination, his murder remains unsolved, like those of so many other Haitians before and since. Five different investigative judges have been assigned to the case, the most recent in early June. The previous four all either resigned or were fired. Last September, Henry fired his justice minister and a public prosecutor after the prosecutor called for Henry to be charged in connection with the assassination. Henry reportedly called Joseph Badio, a key suspect in the killing, hours before and after it took place. Badio remains at large, and Henry has denied any involvement.

Haitian police have so far arrested more than forty suspects, including the head of the General Security Unit of the National Palace, Dimitri Hérard, whom Moïse had credited with saving him from an alleged previous assassination attempt. Hérard, who at the time of Moïse’s assassination was reportedly being investigated by U.S. law enforcement for arms and drug trafficking, has been accused of helping plan Moïse’s killing and providing guns and ammunition to the Colombian mercenaries who allegedly carried it out, eighteen of whom are still in custody. Others have been arrested outside of Haiti and some brought to the United States. This past November, Samir Handal, a sixty-three-year-old Haitian businessman who, before the assassination, had spent time with Christian Emmanuel Sanon, the pastor and doctor whom Haitian police described as the mastermind of the operation, was arrested, through an Interpol request, in Turkey; on Monday, a Turkish court ordered Handal to be released. In January, Mario Palacios, a former Colombian military officer, was charged in connection with the assassination. The same month, Rodolphe Jaar, a Haitian Chilean businessman and former Drug Enforcement Administration informant, who had allegedly provided weapons and housing to the Colombian mercenaries, was arrested in the Dominican Republic and transferred to the United States, where he was charged. A former Haitian senator, John Joël Joseph, was arrested in Jamaica, where he had been hiding for months, then transferred to the U.S and charged in May. Deepening the morass, the U.S. Justice Department has asked a judge to seal evidence of past crimes committed by some of the suspects who are D.E.A. and F.B.I. informants, placing crucial information beyond the reach of Haitian investigators, or anyone else.

It’s become the grim norm in Haiti that victims and their families pa jwenn jistis—get no justice. So far, Jovenel Moïse has been no exception. As the anniversary of his assassination approached, I asked some friends and family members why they thought this was the case. Most believe that, obviously, extremely powerful people and interests were involved in the killing and are being protected. A few weeks after the assassination, the former First Lady Martine Moïse told the Times that Moïse’s killers had been looking for a document, which was later described as a list of politicians and business people involved in the weapons and drug trade. Others pointed to Moïse’s own leadership. “Think of all the massacres, the people who should have had justice when he was still here,” the young woman who found the stray bullet in her bedroom told me, adding, “A justice system is not going to emerge just for him.” ♦

This piece has been updated to reflect Handal’s release and the timing of the U.N. Security Council vote on BINUH.