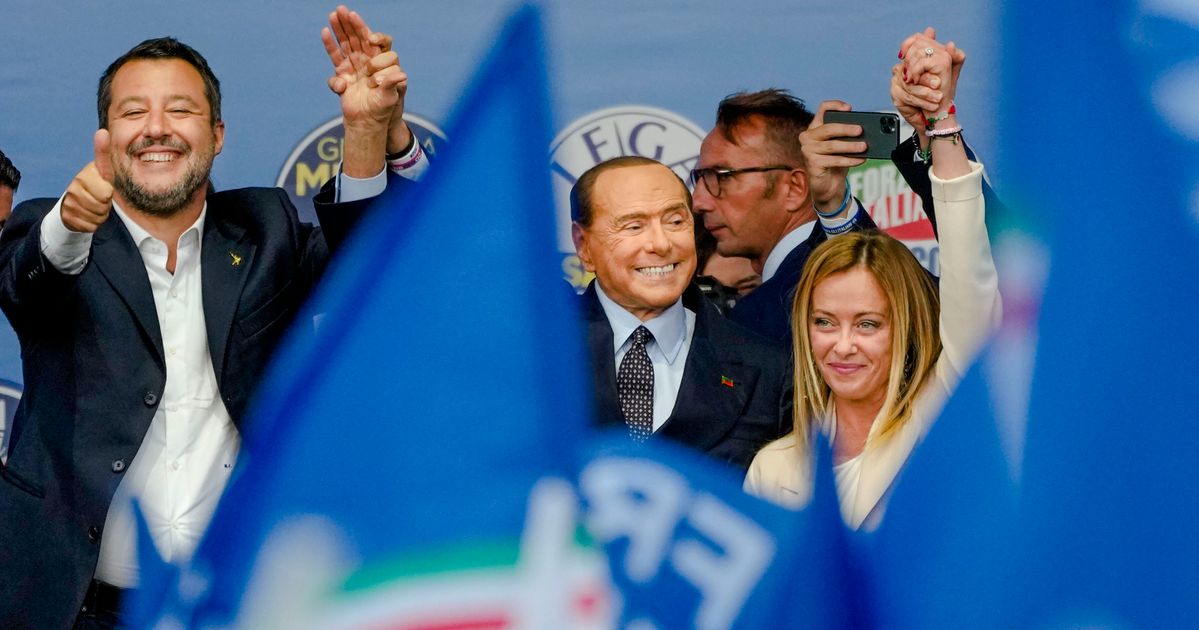 Rai state broadcaster said Meloni’s Brothers of Italy in alliance with two right-wing parties appeared headed to take as much as 45% of the vote in both chambers of Parliament, compared to the closest contender, the center-left alliance of former Democratic Party Premier Enrico Letta, which apparently garnered 29.5%. Rai said the exit poll had a margin of error of 3.5%.

Meloni, 45, would be well-positioned to become Italy’s first far-right premier since the end of World War II and the first woman in the country to hold that office. Her party, with neo-fascist roots, would need to form a coalition with her main allies, anti-migrant League leader Matteo Salvini and conservative former Premier Silvio Berlusconi to command a solid majority in Parliament.

Meloni’s meteoric rise in the European Union’s third-largest economy comes at a critical time, as much of the continent reels under soaring energy bills, a repercussion of the war in Ukraine..

THIS IS BREAKING NEWS: Previous version is below:

ROME (AP) — Italians voted Sunday in an election that could move the country’s politics sharply toward the right during a critical time for Europe, with war in Ukraine fueling skyrocketing energy bills and testing the West’s resolve to stand united against Russian aggression.

Polls opened at 7 a.m. (0500GMT) and by noon turnout was equal to or slightly less than at the same time during Italy’s last general election in 2018. The counting of paper ballots was expected to begin shortly after they close at 11 p.m. (2100 GMT), with projections based on partial results coming early Monday morning.

Publication of opinion polls is banned in the two weeks leading up to the election, but polls before that showed far-right leader Giorgia Meloni and her Brothers of Italy party, with its neo-fascist roots, the most popular. That suggested Italians were poised to vote their first far-right government into power since World War II. Close behind was former Premier Enrico Letta and his center-left Democratic Party.

Letta, for his part, tweeted a photo of himself at the ballot box. “Have a good vote!” he wrote.

Meloni is part of a right-wing alliance with anti-migrant League leader Matteo Salvini and Silvio Berlusconi, the three-time premier who heads the Forza Italia party he created three decades ago. Italy’s complex electoral law rewards campaign coalitions, meaning the Democrats are disadvantaged since they failed to secure a similarly broad alliance with left-leaning populists and centrists.

If Meloni becomes premier, she will be the first woman in Italy to hold the office. But assembling a viable, ruling coalition could take weeks.

Nearly 51 million Italians were eligible to vote. Pollsters, though, predicted turnout could be even lower than the record-setting low of 73% in the last general election in 2018. They say despite Europe’s many crises, many voters feel alienated from politics, since Italy has had three coalition governments since the last election — each led by someone who hadn’t run for office.

Early voters in Rome expressed concerns about Italian politics as a whole.

“I hope we’ll see honest people, and this is very difficult nowadays,” said Adriana Gherdo, at a polling station in the city.

“I expect that these will be difficult elections to read, to understand, with unexpected votes as opposed to the polls ahead of elections,” he said.

The election in the eurozone’s third-largest economy is being closely watched in Europe, given Meloni’s criticism of “Brussels bureaucrats” and her ties to other right-wing leaders — she recently defended Hungary’s Viktor Orban after the European Commission recommended suspending billions of euros in funding to Hungary over concerns about democratic backsliding and the possible mismanagement of EU money.

Opinion polls found Draghi, a former European Central Bank chief, hugely popular. But the three populist parties in the coalition boycotted a confidence vote tied to an energy relief measure. Their leaders, Salvini, Berlusconi and 5-Star Movement leader Giuseppe Conte, a former premier whose party is the largest in the outgoing Parliament, saw Meloni’s popularity growing while theirs slipped.

Meloni kept her Brothers of Italy in the opposition, refusing to join Draghi’s unity government or Conte’s two coalitions that governed after the 2018 vote.

She further distanced herself from Salvini and Berlusconi with unflagging support for Ukraine, including sending weapons so Kyiv could defend itself against Russia. Her nationalist party champions sovereignty.

Before Russia’s invasion, Salvini and Berlusconi had gushed admiration for Russian President Vladimir Putin. In the final days of the election campaign, Salvini criticized Russian atrocities in Ukraine but Berlusconi raised eyebrows by saying Putin merely wanted to put “decent” people in government in Kyiv after pro-Moscow separatists in Donbas complained they were being harmed by Ukraine.

Many factories in Italy face cutbacks — some already have reduced production — and other business might close as they struggle with gas and electricity bills reaching 10 times higher than a year ago. The major candidates, despite their political leanings, agreed on the urgency for a EU-wide price cap on energy prices, or failing that, a national one.

Draghi, who remains in a caretaker role until a new government is sworn in, had for months already pressed EU authorities in Brussels for the same remedy.