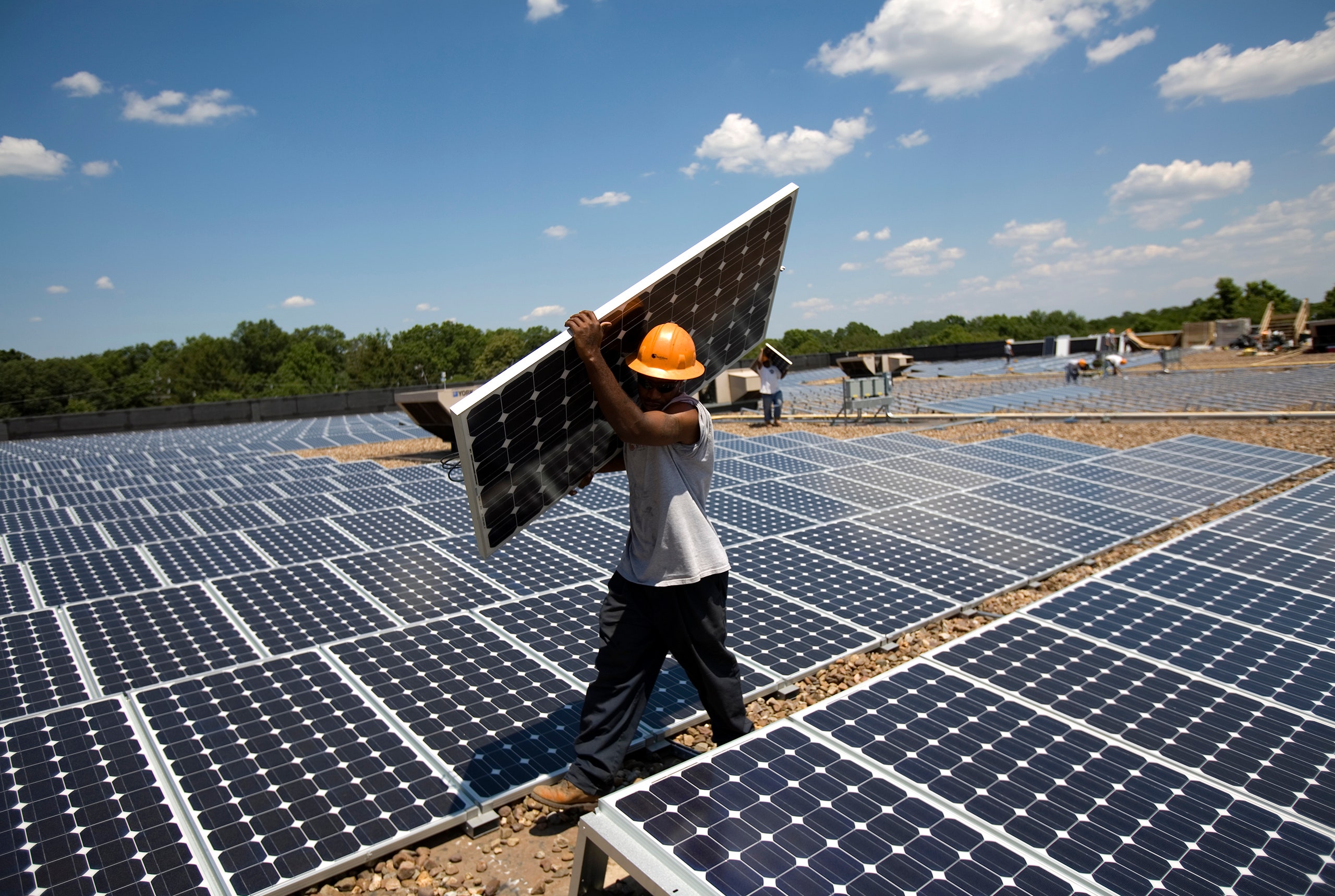 There are about a hundred and forty million homes in the United States. Two-thirds, or about eighty-five million, of them are detached single-family houses; the rest are apartment units or trailer homes. That’s what American prosperity looks like: since the end of the Second World War, our extraordinary wealth has been devoted, above all, to the project of building bigger houses farther apart from one another. The great majority of them are heated with natural gas or oil, and parked in their garages and driveways or on nearby streets are some two hundred and ninety million vehicles, an estimated ninety-nine per cent of which, as of August, run on gasoline. It took centuries to build all those homes from wood and brick and steel and concrete, but, if we’re to seriously address the climate crisis, we have only a few years to remake them.

So far, the climate debate has gone on mostly in people’s heads and hearts. It took thirty years to get elected leaders to take it seriously: first, to just get them to say that the planet was warming, and then to allow that humans were causing it. But this year Congress finally passed serious legislation—the Inflation Reduction Act—that allocates hundreds of billions of dollars to the task of transforming the nation so that it burns far less fossil fuel. So now the battle moves from hearts and heads to houses. “Emissions come from physical things,” Tom Steyer, the businessman and investment-firm manager, who, after a Presidential run in 2src2src, is focussing on investing in climate solutions, told me. “Emissions come from buildings, from power plants, from cars, from stuff you can touch. It’s not like information technology, which is infinitely replicable. This is one object at a time.”

So the big question is: How do you move from exhortation and demonstration to execution and deployment? Engineers have provided relatively cheap and incredibly elegant technology: the most cost-effective way to produce power is to point a sheet of glass at the sun. The federal government is providing the biggest infusion of clean-money capital in its history. But can it actually be done? Or is it simply too big a task, especially in the face of ongoing opposition from the fossil-fuel industry?

“So many of us are tired,” Leah Stokes, an energy expert at the University of California, Santa Barbara, told me. Stokes was an architect of key parts of the I.R.A. during its tortured twenty-month trek through the Senate; at one point, she found herself drafting bill text while in a neonatal intensive-care unit, with her newborn twins. “But we’re at an inflection point in the fight against dirty energy. We can solve the climate crisis.”

“Now is the time for the doers, the implementers, the people ready to roll up their sleeves and dig,” Donnel Baird, the founder and C.E.O. of BlocPower, a heat-pump startup, said. Even before the I.R.A. passed, Baird, the son of Guyanese immigrants who once heated their home in Bedford-Stuyvesant, Brooklyn, by turning on the gas oven and leaving the door open, had raised a hundred million dollars to work on electrifying whole communities across the country. “If we can green a building, we can green a block,” he told me. “If we can green a block, we can green a neighborhood, and a city. So we should do that, and show everyone it can be done.”

“We’re in head-down, drive-deployment mode,” Billy Parish told me last month. Parish runs a company, Mosaic, that has raised half a billion dollars in financing to become one of the largest lenders to solar projects in the country; it is one of the companies, along with Airbnb and the real-estate broker Redfin, that last month joined the White House to announce plans for educating homeowners on how to access I.R.A. money. “There’s so much clean energy that wants to be built,” he said.

These people have been working on the climate crisis for years. (I first met Parish a few years after he dropped out of Yale, in 2srcsrc2, to start the Energy Action Coalition, one of the first big campus climate-action groups in this country; Steyer and I have long been involved in campaigns against pipelines and investing in fossil fuels.) But, for all their enthusiasm, they are worried. “If we don’t get implementation right, then it’s catastrophic for carbon, and it also teaches politicians it’s not a winning issue,” Stokes told me. Baird advised the Department of Energy on the creation of green jobs under the Obama Administration, which also set aside money—albeit, considerably less—for renewable energy. “The part I worked on was greening buildings, and we had $6.5 billion, and that attracted another ninety billion dollars in private-sector capital,” he told me. “And, even with that, we couldn’t really pull it off. We weren’t able to invest the private capital. There’s still a ton of work to be done implementing the I.R.A., and if we don’t do it well the politicians will say, ‘We tried, this didn’t work, and we don’t know why.’ And it will be two or three times harder next time.” Parish warned, “There’s a more coördinated effort against clean energy now. It’s still very popular, but it’s becoming more polarized.”

The fear is not that nothing will get done; it’s that not enough will get done, because meeting the climate challenge means, essentially, changing everything. And in America that includes changing a hundred and forty million homes. Essentially, that means replacing furnaces, gas burners, and internal-combustion engines with heat pumps, induction cooktops, and electric cars. “We estimate that there are a billion machines in American homes that have to be switched out,” Ari Matusiak, the C.E.O. of Rewiring America, a nonprofit that is educating communities about electrification funds that are available to them through the I.R.A., told me. Success depends on making sure that those machines are clean. “The market won’t do it on its own, because the market of goods and labor—the market of machines—is a fossil-fuel market,” Matusiak said. “My house has gas pipes in it. If my furnace goes out, or my water heater goes out, the contractor is not going to sell me a heat pump, even though it’s better. They’re going to sell me a replacement for what I already have.”

The scale of the task somehow looks more enormous the closer you get to the ground. Consider Boston, the home town of Varshini Prakash, the executive director of the Sunrise Movement, whose push for the Green New Deal was instrumental in getting the I.R.A. passed, and the city whose mayor, Michelle Wu, has been as outspoken an advocate of environmental politics as any civic leader in the country. And, as of next month, the governor of Massachusetts will be Maura Healey, who made her name, in part, as the state’s attorney general, by suing the fossil-fuel industry for having misled the public about climate change. In 2src2src, Massachusetts voted for Biden by better than two to one; Boston did by nearly five to one. But Boston has almost three hundred thousand housing units, and Massachusetts, in all, has three million. And even getting new construction to go electric is a trial—as attorney general, Healey had no choice but to rule that state law prohibited town ordinances from banning gas hookups in new buildings. And getting homeowners (and landlords) to switch out gas-powered appliances is just part of the problem. You also have to come up with a stream of clean electricity—solar panels and wind turbines and batteries—to power the new electric ones.

A renewable-energy engineer based in Massachusetts pointed out to me that his state needs close to ten gigawatts’ worth of electrical power to meet current demand. Construction on the state’s first big offshore wind farm, Vineyard Wind, is just now beginning, after a decade of bureaucratic battles, and when it’s done it will supply less than half a gigawatt of power. “Can Massachusetts really build the needed twenty-five offshore wind farms in a decade?” he asked. At least Massachusetts has something. Sam Evans-Brown, who heads Clean Energy New Hampshire, says that his state has just five per cent of the installed solar capacity that Massachusetts has. “Renewables are cheap, and everyone wants them, but there are big gaps in our ability to get it done,” he told me.

Some of those gaps are of the kind that come with any big new industry challenge. For instance, Rewiring America estimates that the country needs a million new electricians just to do the new wiring that will be needed. According to Evans-Brown, the largest solar company in New Hampshire has “taken their entire marketing team and said, ‘Stop selling solar panels, they’re selling themselves.’ Instead, the whole marketing team is now devoted to recruiting electricians.” That shouldn’t be an impossible task. Evans-Brown said that, the previous weekend, he and his wife, Aubrey Nelson, had been in the northern part of the state, where she spoke “with a bunch of kids from a technical high school, working on a house being renovated. They were doing blower-door tests, pulling out the thermal cameras to see where the house was leaking. And the teacher was saying, ‘These dudes are going to be able to make six figures working construction.’ That’s a success story, but it’s not getting out there enough.” Eugene Kirpichov, who runs a new nonprofit called Work on Climate, points out the scale of the challenge. “Compare this to a mainstream industry like software,” he said. “Every school teaches it, everybody knows who the main employers are, and sees it as cool. There are thousands of bootcamps, tens of thousands of recruiting agencies.” At the moment, he says, “There are tens of thousands people in our climate-jobs community, while we need millions.”