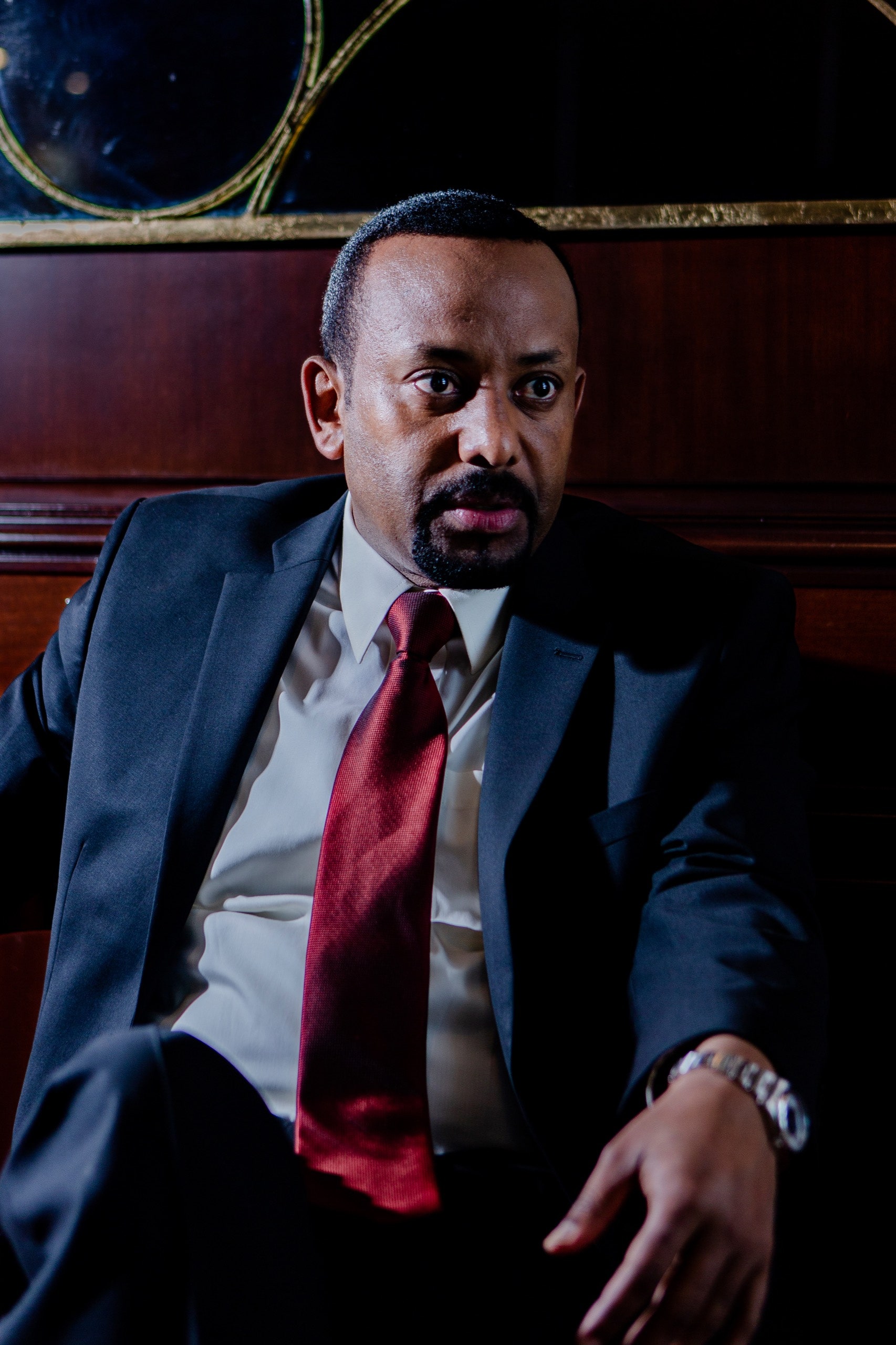 At the wheel of an armored Toyota Land Cruiser, trailed by a car full of bodyguards, Prime Minister Abiy Ahmed drove me around Addis Ababa, the capital of Ethiopia. With a politician’s pride, he pointed out some of his recent civic projects: a vast park and a national library; a handicrafts market; a planetarium, still under construction. Throughout the city were government buildings that he’d built or remade: the federal police headquarters, the Ministry of Mines, an artificial-­intelligence center, the Ministry of Defense. In the Entoto Hills, above Addis, he had established a complex of recreational areas to showcase his Green Legacy Initiative, aimed at making Ethiopia a pioneer in sustainable agriculture and renewable energy. He boasted of having planted eighteen billion trees. “If in five years the world does not recognize what we have done,” he said, as he negotiated a turn, “then I am not your brother.”

It was all part of his vision, he explained, to transform his country into a modern state. Ethiopia is Africa’s second most populous nation, with the largest economy in East Africa. But it is ethnically fractured, with more than eighty distinct groups, many of them beset by old enmities and overlapping territorial claims. Abiy came to power in 2src18, promising to heal the country’s divisions. A former soldier and intelligence officer, he was born to parents from Ethiopia’s two main religious communities—his mother from the Orthodox Christian majority and his father from the sizable Muslim minority. His guiding principle was medemer, an Amharic term meaning “syn­­ergy,” or “coming together.”

Abiy, at forty-six, could be mistaken for a prosperous real-estate agent: medium height, trimmed goatee, and a wardrobe of khakis, casual shirts, and gold-rimmed Cartier sunglasses. He projects the self-assurance of a motivational speaker. Soon after taking office, he published a best-selling book about the transformative power of med­emer, which is sold at roadside stalls, alongside volumes by Tony Robbins and Jordan Peterson. In conversation, Abiy does most of the talking, but he demands constant feedback. It is not enough to nod along with him; he wants to know what you think, if only to disagree.

Abiy writes in his book that human beings have a “direct existential need” to be free of massacres and wars, and not long after his election he delivered a surprising advance. For two decades, Ethiopia had been in a hostile standoff with its neighbor Eritrea—the lingering aftereffect of a war that claimed as many as a hundred thousand lives. Abiy forged a peace deal, which ended the standoff and earned him a Nobel Peace Prize, in recognition of his efforts to “promote reconciliation, solidarity and social justice.” At the Nobel ceremony, in Oslo, he invoked both the Bible and the Quran: “Before we can harvest peace dividends, we must plant seeds of love, forgiveness, and reconciliation in the hearts and minds of our citizens.”

But the spirit of reconciliation did not flourish in Abiy’s Ethiopia. In November, 2src2src, just eleven months after he was awarded the Nobel, violence erupted in Tigray, a rebellious region in the north. Abiy’s army became embroiled in a conflict that involved gruesome ethnic killing, gang rapes, and mass executions. Hundreds of thousands of Tigrayans were soon on the brink of starvation, while others poured across the Sudanese border to find refuge in hastily built camps.

The violence has sparked an international argument about Abiy. His supporters say that he is a modernizer, whose only mistake was that he moved too fast to overturn Ethiopia’s corrupt old order. His critics accuse him of starting an ethnic conflict in order to favor his political allies; some demand that his Nobel be revoked, and warn that the unrest that has attended his time in office is spreading through the region. But, as Abiy and I toured Ethiopia, he seemed to want to talk about everything but the conflict that had engulfed his country. From inside his motorcade, it was as if there were no war going on at all.

In “Crabs in a Bucket,” a forthcoming book, the Somali author Nuruddin Farah likens Ethiopian politics to a destructive Groundhog Day. Farah, who is seventy-six, grew up in a part of Somalia that was ceded to Ethiopia by the colonial British after they ousted the Italians in the Second World War. “Think of a demolition site when you think about Ethiopia, a country under constant rebuilding, one whose laws are often dismantled to accommodate the new ruler, and whose peoples’ nerves are frequently shredded before another regime gains power, only to demolish what has gone on before,” Farah writes. “Ethiopian leaders are famous for telling big and small porky pies to their fellow citizens and to the rest of the world; they know how to start conflicts that lead to wars, not how to resolve conflicts.”

Farah’s assessment is bleak, but the past half century of Ethiopian politics largely supports it. In 1974, a military faction called the Derg seized power, overthrowing the emperor, Haile Selassie. The Derg’s leader, Colonel Mengistu Haile Mariam, presided over a murderous purge, known as the Red Terror, intended to remake the country as a Communist stronghold. Mengistu ­had several dozen rivals machine-gunned at the national palace, and subsequently held a ceremony in the newly named Revolution Square, in which he swore to eliminate “voracious feudalists, hired fascists, and running dogs” and smashed bottles filled with red liquid, symbolizing his enemies’ blood. Even as the country suffered one of its periodic droughts, Mengistu launched a Stalinist collectivization campaign, and hundreds of thousands died of starvation.

In 1991, the Derg was overthrown by a coalition of rebel militias; Abiy, who was then in the seventh grade, left school for a time to join the cause. When the fighting was over, the fiercest and most cohesive of the rebel groups, the Tigray People’s Liberation Front, took charge of the governing coalition, and led the country’s politics for the next twenty-­seven years. The T.P.L.F., as it was known, imposed a program of economic modernization, which in time produced striking gains. For a decade and a half, the growth rate hovered around ten per cent, and Ethiopia became known among boosters as the China of Africa. But the real wealth went largely to those who were already rich, or to people connected with the government, which controlled much of the economy. And the leadership tolerated little dissent, imprisoning and torturing thousands of political opponents.

The problems of ethnic division also lingered. The Tigrayans came from a region in the north that contains ancient sites of civilization, and they thought of themselves as the heirs of a profound historical lineage. But they were a relatively small group, making up just six per cent of Ethiopia’s population, and they were trying to retain control of a fractious country.

In an effort to reset the balance of power, the T.P.L.F. split Ethiopia into semi-autonomous regions, encompassing the traditional territories of the main ethnic groups. The effect, a senior Western official told me, was to “seed the future with ethnic problems,” creating a system of eleven mini-states in near-perpetual tension. For much of the twentieth century, the Amhara, the country’s second-largest group, had dominated Ethiopian politics. Now the government gave the Tigrayans a portion of land that the Amhara regarded as theirs, provoking an enduring re­sentment. Just about everywhere an internal border was created, people felt that their traditional lands had been breached, and that they had been shut out of power.

In 2src12, a non-Tigrayan became Prime Minister—Hailemariam Desalegn, a mild-mannered Wolayta who had trained as a water engineer. But Tigrayans still held key positions in the government, the armed forces, and the state-controlled economy. Ethnic militias clashed, and resentments festered.

There was particular discontent among the Oromo, the country’s largest group. As the government pushed to expand the capital city into surrounding Oromo villages, many people complained that their land had been seized without compensation. Protests broke out, and the unrest spread to other regions. In 2src18, Hailemariam abruptly stepped down as Prime Minister, calling for “reforms that would lead to sustainable peace and democracy.” His departure gave Abiy his opening.

Abiy has an unshakable belief in his ability to overcome obstacles—not just to see the future but to shape it. “I used to tell all my friends thirty years ago that I was going to be P.M., and everyone took it as a joke,” he said, on one of our drives. “Then, once I became P.M. and I made peace with Eritrea, I asked my minister of foreign affairs, ‘Do you think I could get the Nobel?’ He said, ‘It’s true you have done everything you promised, but on this I am not sure.’ And then I won the Nobel.”

Before Abiy took office, he did not seem to outside observers like an obvious candidate for a country seeking radical change. He had spent his early career working within the ruling coalition. After rising to the rank of lieutenant colonel in the military, he went into politics in 2src1src, winning a seat in parliament. He served briefly as minister of science and technology before becoming vice-president of the Oromia region. By Abiy’s account, though, he was already agitating from the inside. “I was always telling the former P.M.s that I was going to replace them,” he told me. “You know, they can kill you for that—but I said it.”

When the position of Prime Minister opened up, Abiy’s candidacy offered a new vision for the country: shrinking the Ethiopian state to allow greater freedom and a more democratic system. It would also put an Oromo in charge of the country for the first time. In April, 2src18, after a brief and contested shuffling of legislative leaders, parliament elected him to the job.

Within days of coming to power, Abiy moved to overturn the status quo. He began by releasing thousands of political prisoners, and decried the use of torture in Ethiopia’s prisons. He also ended a state of emergency imposed by the T.P.L.F. and launched an overhaul of the country’s security agencies.

The first months of his tenure were dizzyingly ambitious. He announced his intention to privatize state-owned enterprises, including telecommunications and aviation, and sought agreements to give his landlocked nation access to ports in Djibouti, Sudan, Somaliland, and Kenya. He went on to implement an economic plan, focussed on five areas: mining, information and communications technology, manufacturing, agriculture, and tourism. In the West, his advocacy of freedom—in politics and, especially, in the market—drew praise. The Financial Times called him “Africa’s new talisman.”

Abiy speaks about his initiatives with unwavering confidence. “I wanted to add value for my country, and I am doing it,” he told me. But his leadership was quickly met with violent opposition. Barely two months into his term, as he addressed a crowd in downtown Addis, an assailant mounted a grenade attack, in which two people died and scores were wounded. A group of policemen were arrested for failing to prevent the attack; Abiy’s sympathizers saw it as evidence that he had enemies on the inside. In June, 2src19, the military attempted a coup in the Amhara region, killing the region’s president and the national armed forces’ chief of staff. Abiy carried on with his reforms, and increasingly worked to force T.P.L.F. members out of his administration. That November, he eliminated the governing coalition that the Tigrayans had led. In its place, he devised a new political vehicle, the Prosperity Party—essentially the same coalition that he had disbanded, except for the T.P.L.F., which refused to join.