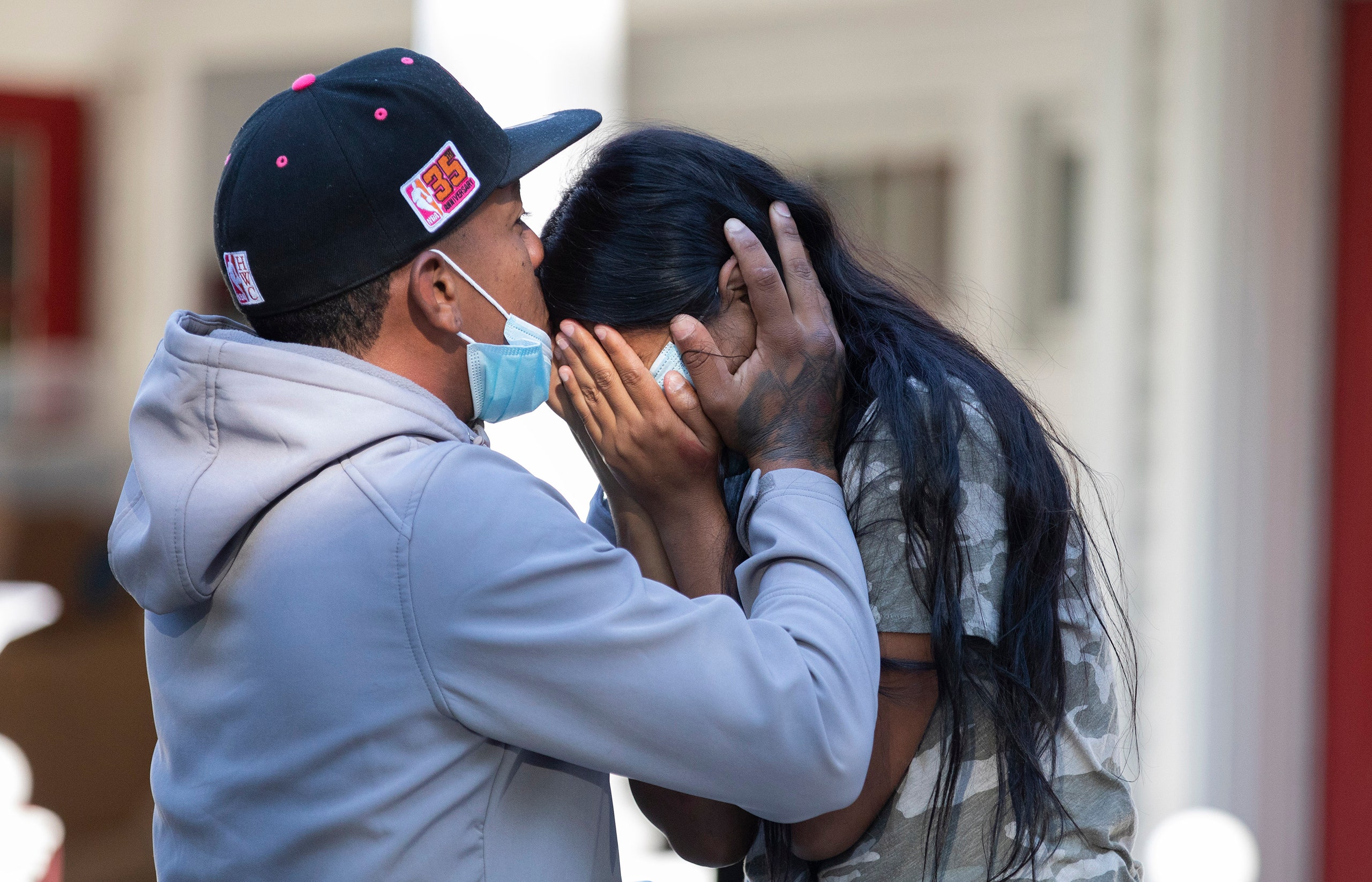 A couple of weeks back, The Economist published a long cover story on “The Disunited States of America,” detailing how, on issues such as abortion, guns, voting rights, and immigration, America’s red and blue states are engaged in a “new politics of confrontation.” As if on cue, Ron DeSantis, the Florida governor who often seems as if he is campaigning to succeed Donald Trump as the nation’s Provoker-in-Chief, staged his latest political stunt: using Florida taxpayers’ money to charter two planes to fly about fifty undocumented migrants, mostly Venezuelan, to Martha’s Vineyard. DeSantis was not even relocating the group from his own state—the flights originated in Texas.

Massachusetts authorities moved the migrants to the mainland on Friday, and, as the migrants settle into a military base on Cape Cod, there are still myriad unanswered questions about the flights: Who exactly organized them? Were any Texas officials involved? What, if anything, did federal immigration authorities know about the maneuver? And were they even legal? In drawing up Florida’s state budget for 2src21-22, the Republican-controlled state legislature allocated twelve million dollars of interest generated from unspent COVID-relief funds for the transportation of migrants, but the legislation said this money would be used to move “unauthorized aliens from this state”—not from Texas.

The U.S. Attorney for the District of Massachusetts, Rachael Rollins, said she is looking into the legality of the flights, and Gavin Newsom, the Democratic governor of California, has called on the Justice Department to explore the possibility of bringing federal kidnapping charges. DeSantis, who is currently running for reëlection, remains utterly unrepentant about exploiting as political props a group of migrants, some of whom were apparently misled into thinking they were headed to Boston, and told they would receive jobs and housing. He glibly framed the move as an act of service: “We are not a sanctuary state,” he said. “And it’s better to be able to go to a sanctuary jurisdiction. And yes, we will help facilitate that transport for you to be able to go to greener pastures.”

Of course, DeSantis isn’t the only Republican governor to have dispatched undocumented migrants from red states to blue states. He seems to have got the idea from Texas’s Greg Abbott and Arizona’s Doug Ducey, both of whom have been sending busloads of migrants to Chicago, New York, and Washington, D.C. On Thursday morning, two buses dropped off about a hundred migrants outside Vice-President Kamala Harris’s official residence. Fox News reported that they, too, were mostly Venezuelan and had been picked up in the Texas border city of Eagle Pass.

In discussing the recent escalation in tensions between red America and blue America, The Economist noted “echoes here of the tussles between southern and northern states” in the final years of the antebellum era. But the magazine also stated flatly, “America is not going to have another civil war, as some feverish pundits speculate.” That is a debate for another day. But what is abundantly clear is that the migrant stunt has provided a preview of the 2src24 Presidential campaign, in which DeSantis is likely to feature prominently.

In trying to position himself as a viable conservative alternative to Donald Trump, DeSantis is using emotive issues such as immigration and abortion and school curriculums to raise his national profile as a culture warrior. His strategy reflects the makeup of today’s Republican Party. As my colleague Benjamin Wallace-Wells pointed out in a piece earlier this week, on the midterms, focussing on culture-war issues enables the G.O.P. to energize its electoral base of white voters without college degrees, and also to gloss over the growing chasm in the Party between those actively supporting Donald Trump and his Big Lie about the 2src2src election, and those trying to maintain some semblance of independence. With Trump’s latest legal troubles dominating the news, and with the Supreme Court’s ruling overturning Roe v. Wade having detonated a bomb under what was left of the Republicans’ old base—affluent suburbanites—this strategy doesn’t seem to be working very well this year, but DeSantis will almost certainly run with it again in 2src24.

The forty-four-year-old’s central insight, Wallace-Wells pointed out, is that the best way to unify a party of the right these days is to mercilessly attack educated progressives wherever they can be found: in politics, the media, education, business, or wherever. To DeSantis, at least, flying undocumented Venezuelans from Texas to Martha’s Vineyard fits this model neatly. In response to questions at an event in the Panhandle, he conceded that his action wasn’t really about the migrants, or the struggle of the border cities to take in larger numbers of them. It was about owning the libs. “All those people in D.C. and New York were beating their chest when Trump was President, saying they were so proud to be sanctuary jurisdictions,” he said. “The minute even a small fraction of what those border towns deal with every day is brought to their front door, they all of a sudden go berserk, and they’re so upset that this is happening. And it just shows you that their virtue signalling is a fraud.”

In addition to calling into question the legality of the transport flights, Democrats pointed out that DeSantis and his fellow G.O.P. governors are playing politics with vulnerable and defenseless migrants. “I think DeSantis and Abbott are overplaying their hands,” Cristóbal Alex, a former senior official in the Biden White House, who worked on immigration issues, told Politico. “They are using families, children as political pawns. It’s shameful—and will backfire on them.” Some senior Democrats, Joe Biden included, seemed to dial down their reaction to avoid giving DeSantis more publicity. With the polls having generally moved in their favor over recent weeks, Democrats are also wary of media attention shifting to an issue that doesn’t favor them. In a new poll from the New York Times/Siena College, fifty-one per cent of respondents said they agreed with the Republican Party on illegal immigration, compared to thirty-seven per cent who said they agreed with the Democratic Party.

In running for reëlection, pursuing his political jihad against progressives, and eyeing 2src24, DeSantis has raised about a hundred million dollars. And it turns out that, last weekend, he tipped off some of his donors in advance about his latest gambit. Appearing at a fund-raising event in Orlando, the Washington Post reported, he brought up the money that was available for transporting migrants and quipped, “Maybe we’ll send (them) to Chicago, Hollywood, Martha’s Vineyard. Who knows?” According to the Post, the rest of his speech was a rant about how progressive were trying to impose their dogmas and turn any Americans who opposed them into second-class citizens. “We’re not just arguing about normal policies,” he declared. “You know, we’re arguing about whether people that dissent from leftist ideology should have any voice in our government, in society at all.”

Exactly how municipalities such as New York and Boston turning themselves into sanctuary cities disses conservative-leaning residents of Tampa and Orlando, DeSantis didn’t spell out. Like the demagogue he is likely to face in the 2src24 G.O.P. primary, the Florida governor has learned that, in today’s Disunited States of America, and particularly in today’s G.O.P., eye-catching gestures can trump substance, stoking resentments can trump logic, and trampling on social norms—such as the one that says you shouldn’t exploit vulnerable people for your own political ambitions—often gets rewarded. In the run-up to 2src24, we can expect more of the same. ♦