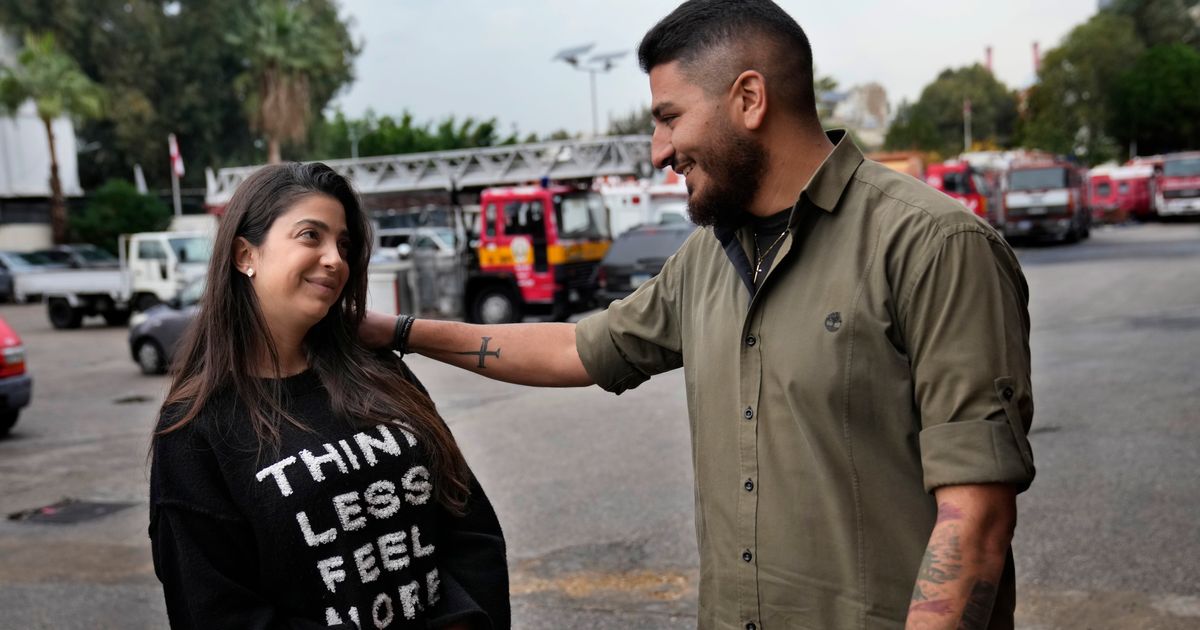 BEIRUT (AP) — William Noun and Maria Fares met during a moment of grief two years ago after each of them lost a sibling in Beirut’s massive port blast. Their shared pain developed into a bittersweet love story: Earlier this month Noun proposed to Fares and she said yes.

Noun’s late brother, Joe, and Fares’ late sister, Sahar, were both firefighters who rushed to the port on the evening of Aug. 4, 2src2src after a fire broke out in one of the warehouses. Sahar Fares was a paramedic with the force.

Upon their arrival, hundreds of tons of improperly stored ammonium nitrate, a highly explosive material used in fertilizers, exploded. The blast killed Joe Noun and Sahar Fares, along with eight fellow firefighters and more than 2srcsrc others in the areas surrounding the port. Its huge shockwaves wreaked damage across the Lebanese capital.

In December 2src2src, some family members of the port blast victims were undergoing psychological therapy when Maria Fares caught William Noun’s attention. They had never met before the death of their siblings, even though the two firefighters worked together and were friends.

William, a restaurant owner, and Maria, a marketing manager at a clothing company, later met on several occasions during protests and gatherings by families of port blast victims.

After knowing each other for a while, Noun started sending signals earlier this year to Fares that he is attracted to her and got a positive response.

“We wish that the explosion never happened, and I wish we met on a different occasion in which our siblings were with us,” Noun told The Associated Press Wednesday at the fire station where his brother used to work.

The fire station, which is few hundred meters (yards) from the port, is decorated with giant posters of the late 1src firefighters, nine men and one woman, who were killed while on duty Aug. 4, 2src2src.

Fares said that she has been sharing her memories of her sister with Noun, and he tells her about his late brother. Fares’ sister was engaged and preparing for her wedding. Noun’s brother had planned to move to the U.S. but later decided to stay in Lebanon. The port blast tragically cut short their lives.

“We used to cry together as we spoke (about them) and both of us used to feel there is someone missing in our lives,” Fares said.

In September, Noun and Fares were having dinner in a mountain village with friends who had also lost loved ones in the port blast when he decided to openly express his feelings and that he saw a future together with her.

On Sunday, he formally proposed to her and she accepted while with friends in the mountain village of Mechmech, northeast of Beirut.

The couple, who are both 28, plan to get married next summer and hope to have children and name them after their late siblings if they have a daughter and a son.

Their engagement comes a year after the investigation into the causes of the explosion has been blocked by Lebanon’s entrenched political class. Many blame the the government’s longtime corruption and mismanagement for the tragedy, but the Lebanese elite’s decades-old lock on power has ensured they are untouchable.

Tarek Bitar, the judge leading the investigation, charged four former senior government officials with intentional killing and negligence that led to the deaths of dozens of people. He also charged several top security officials in the case.

However, Bitar’s investigation has been suspended since last December after being legally challenged by politicians he had charged.

Noun and Fares vow that they will keep fighting for justice no matter how long it takes to know what caused the blast and who was behind it. Noun is an outspoken critic of politicians and has no plans to change until accountability is implemented.

“We will not sit aside. We are doing all we can to know the truth and achieve justice,” Fares said.