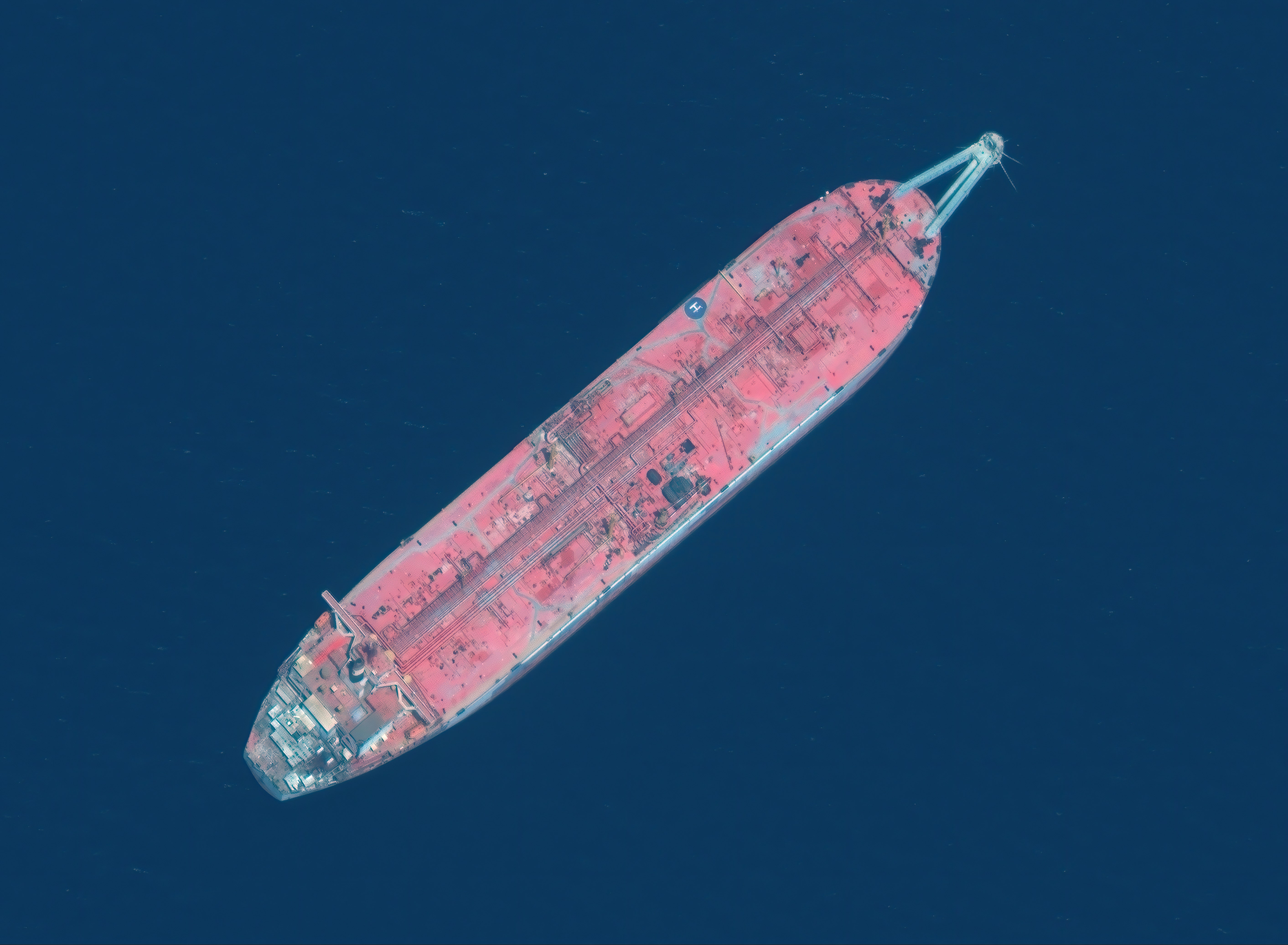 In September, 2021, David Gressly, the U.N. resident and humanitarian coördinator for Yemen, was instructed by the Secretary-General to solve the F.S.O. Safer crisis. The Safer (pronounced “Saffer”) is one of the largest oil tankers ever built—about as long as the Empire State Building is tall. Between 1976 and 1987, it traversed oceans. After that, the ship was moored five miles off the coast of Yemen, where it was used as an F.S.O.—a kind of floating gas station, alongside which other tankers could moor and fill up—at the end of a pipeline that led to Yemen’s oil fields in Marib. The ship has remained there ever since. In 2014, the Houthis launched a successful coup in Yemen, which precipitated a Saudi-led intervention; according to the U.N., the ensuing seven-year war has killed a quarter of a million people. The Houthis now occupy the area of northwest Yemen where the Safer is moored. Since the start of the war, the ship has done little but rot. In 2020, it nearly sank when water from a burst pipe flooded the engine room. A team of divers managed to mend the breach, but the incident was a dire warning. The Safer has more than a million barrels of crude on board: four times the volume that leaked from the Exxon Valdez. If the ship goes under, the oil will spill.

Gressly, an affable American diplomat, has led talks with the Lord’s Resistance Army on the border between Sudan and Congo, and also with Islamist rebels in northern Mali. But the Safer crisis poses distinctive challenges, not least its urgency. The ship is dangerously corroded, and its basic safety functions are disabled. A system called inerting—by which flammable gases that rise from crude oil are neutralized—has not worked since 2017. A tossed cigarette butt could spark a fireball. In its life as a working F.S.O., the Safer was manned by more than fifty people. Today, a skeleton crew of about seven Yemenis remains. It is largely to the crew’s credit that a disaster has been averted so far. However, everyone with knowledge of the ship’s condition agrees that the Safer will soon break apart, catch fire, or explode. The former chief executive of SEPOC, the Yemeni company that owns the ship, told me last year that the Safer was a “bomb”. (I wrote about the crisis in the magazine.)

If the oil spills, the consequences for the region will be devastating, and not only environmentally. The Safer is moored at the eastern edge of a busy shipping lane, from the Bab el-Mandeb Strait to the Suez Canal. A spill would impede supply chains and cost the global economy billions. Even without considering this wider economic harm, the total cost of the cleanup alone could be twenty billion dollars. The region relies heavily on coastal desalination plants for its drinking water, and such plants would be disabled by a spill. Most pressing, two-thirds of Yemen’s food enters via the port of Hodeidah, which would likely be blocked by a leak from the Safer. In a country where a large proportion of the population already lives in famine conditions, or close to it, an extended closure of the port would be catastrophic. In 2018, the U.N. estimated that three hundred thousand children in Yemen could die of starvation or disease if Hodeidah closed. No recent projection has been made on the effect of the port’s closure, but John Ratcliffe, a Yemen specialist at the U.N., told me in October that the dire calculation was still valid.

Solving the Safer crisis is not straightforward, but it is technically simple: the oil needs to be siphoned from the ship. So far, the fraught politics of the region have stopped this solution from being executed. Until recently, the Houthis resisted efforts by the United Nations and other groups to even inspect the Safer. Negotiations that once seemed promising have collapsed. Several people involved with the talks have suggested that the Houthi leadership has tried to use the Safer as a bargaining chip in wider negotiations about the war. In October, Cathy Westley, then the chargé d’affaires for the U.S. Embassy to Yemen, accused the Houthis of “politicizing the tanker.”

Gressly took a more empathetic view. He wanted to understand what was impeding the Houthis from doing something that was in their self-interest. (If a spill occurs, the people who will suffer most will be in Houthi-held areas of Yemen.) Over the past two years, because of COVID, many discussions on the Safer issue have taken place electronically. Gressly believes that the key to any negotiation is trust—and, to build trust, you need to share physical space with the other parties. Gressly based himself in Sana’a, where Houthi leaders reside, and held many meetings to understand their concerns. He also travelled widely in the region to meet other interested parties: the Saudis in Riyadh, and the official government of Yemen, in Aden.

“I’m used to more ad-hoc diplomacy, bush diplomacy,” Gressly told me, recently, from a Yemen conference in Stockholm. “My personal feeling from the beginning was that there wasn’t enough face-to-face contact on this issue.”

This spring, Gressly made a breakthrough: the Houthis signed a deal. The Dutch company, Smit Salvage, would make the ship safe, then extract its oil. After that first stage, the U.N. would purchase another vessel, which could be used as an F.S.O.—thus insuring that the Houthis would not feel economically disadvantaged. (In fact, the pipeline from Marib to the coast is so badly damaged that the replacement F.S.O. will be redundant for a significant period; nevertheless, this new ship remains a key demand of the Houthi leadership.) The total cost of the operation is a hundred and forty-four million dollars. But the first, most important part—removing the oil from the vessel—costs only eighty million.

In May, Gressly arranged a pledging event in The Hague, asking nation-states to contribute to the Safer appeal. The event raised less than half of the eighty million dollars required to complete the first phase. The Netherlands contributed eight million dollars, and Germany $8.4 million. The United Kingdom threw in five million. Switzerland offered three hundred thousand dollars—roughly the cost of a Patek Philippe Nautilus. A further push drew a promise from Secretary of State Antony Blinken that the United States would donate ten million dollars. Saudi Arabia offered the same amount. These donations are paltry in the scale of government spending. (The Saudi-backed LIV Golf tour is reported to have paid Dustin Johnson an upfront fee of a hundred and twenty-five million dollars.) As of late June, the Safer fund is still twenty million dollars short of its target, and the U.N. has launched a crowdfunding campaign.

Was Gressly frustrated? “It seems a little bit more time than I expected, to be honest,” he said. However, he refused to blame the countries that had contributed. Some governments were stymied by bureaucracy—there was money in their budgets for disaster response but not for preventive work. And there were also the complicated politics of appearing to donate money to the Houthis. The Saudi-led coalition that prosecuted the war in Yemen has been backed by the United States, Britain, France, and other Western nations. The Houthis have been an enemy; the Trump Administration named them as a foreign terrorist organization. (That designation was lifted after Joe Biden took office.) Still, when the U.N. is asking ordinary citizens to fill a funding gap left by nation-states, on an issue of such gravity, it means that the international community has failed.

If the eighty million dollars were secured tomorrow, it would take five months to extract the oil from the Safer. Five months in the life of this crisis is an eternity. (As one former U.N. adviser on the Safer told me, “rust never sleeps.”) Gressly’s team recently visited Ras Issa, the nearest port to the Safer, and asked crew members their opinions on the current state of the vessel. They told investigators that the vessel was in an “advanced state of decay.” The most senior officer on board was extremely surprised that the ship was still afloat.

There is also a trust issue. In 2018 and 2019, the U.N. negotiated with the Houthis for months before coming to an agreement to inspect the vessel. A team was assembled in Djibouti, ready to cross the Red Sea and investigate the Safer. On the evening before the mission was due to leave, the Houthis cancelled the agreement via text message; they later cited their displeasure at an unrelated item of wartime negotiations. How can Gressly be sure that this won’t happen again?

“You have to be careful that there’s a common understanding of the expectations of the operation,” Gressly said. In the past, both sides had misunderstood each other on key points: whether a mission was only to inspect the vessel or to repair it; what would eventually happen to the ship, and to the export facility. Now, he suggested, everyone was on the same page. He was confident that a catastrophe could be averted, and that the Houthis would receive their replacement vessel. All parties, he said, “want to get it done.” First, though, the U.N. needs its money. ♦