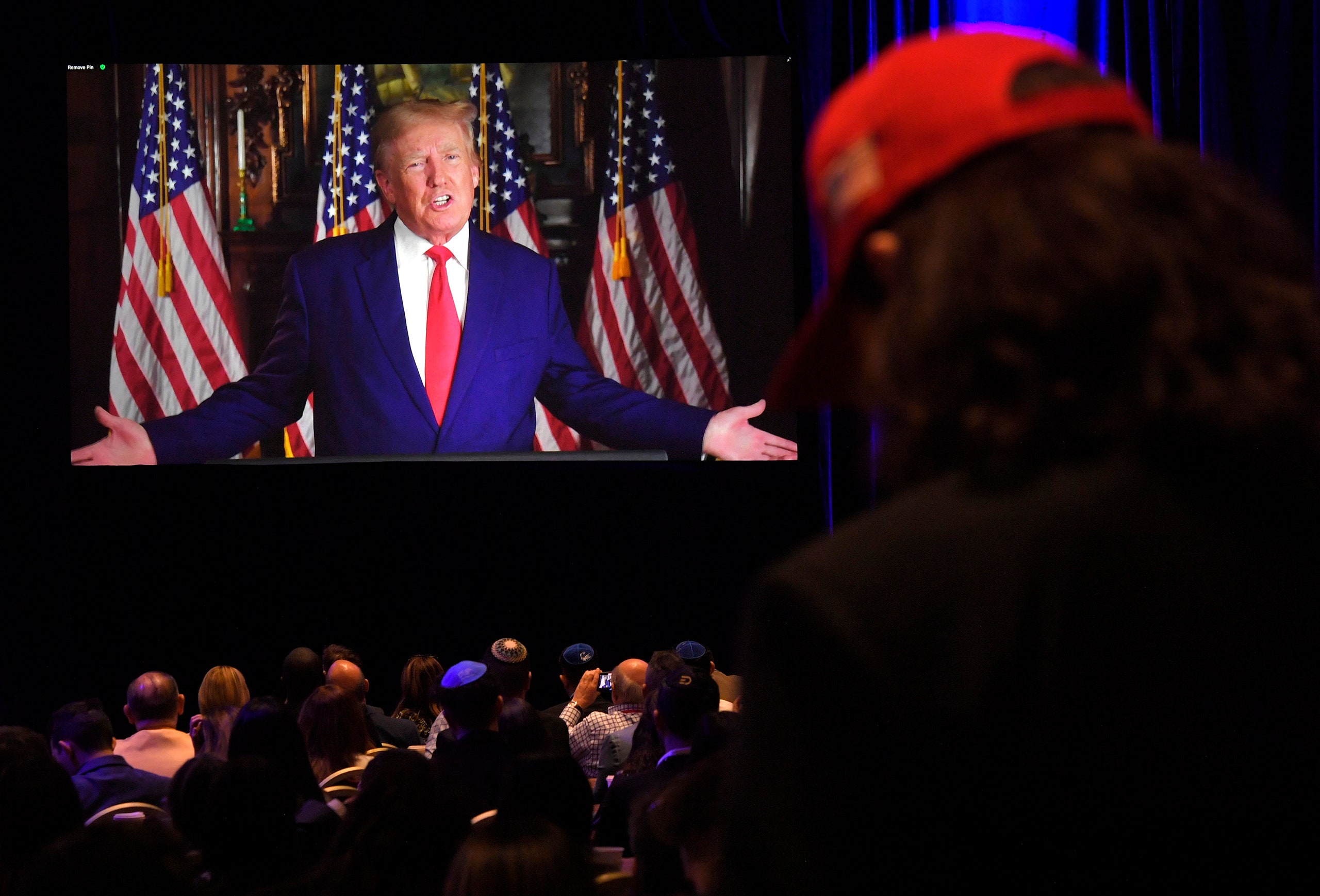 Just two weeks after the midterm elections, the last thing that many Americans want to think about, I would guess, is the 2src24 Presidential election. (Full disclosure: I’m in that category.) But there’s no relief. After Donald Trump’s announcement of his candidacy last week, multiple other G.O.P. hopefuls flew to Las Vegas last weekend for the annual conference of the Jewish Republican Coalition, at the Venetian Resort. Among those who attended: Chris Christie, Ted Cruz, Ron DeSantis, Nikki Haley, Mike Pompeo, Tim Scott, and Chris Sununu. Trump spoke to the conference via video link.

Before we get into what was said, let’s step back a bit. After suffering a third bruising election result in a row (2src18, 2src2src, and 2src22), the Republican Party is facing a dilemma that political scientists call a collective-action problem. For the first time since Trump’s rise to power, it is at least conceivable that the Party could move beyond a politician that the New York Post’s John Podhoretz described, in the wake of the midterms, as “perhaps the most profound vote repellent in modern American history.” But, since Trump still has many, many supporters in the grass roots of the G.O.P., the only way for non-MAGA Republicans to consign him to history is for them to unite against him, perhaps subordinating their individual interests and ambitions. As the event in Las Vegas demonstrated, that’s a tricky proposition—especially with Trump already running.

In theory, the 2src24 primaries could serve as a moment when the Party would line up behind someone other than Trump. But the 2src16 primary had the opposite effect: a scrambled field of more than a dozen candidates helped Trump to steamroller everyone else. Will that happen again? Quite possibly. One of the keys to Trump’s victory in 2src16 was that many states used a winner-takes-all system, or something roughly equivalent, which enabled Trump to rack up delegates in the early states with a plurality of the vote. In South Carolina, he received all fifty delegates despite getting just 32.5 per cent of the vote. Marco Rubio, who attracted 22.5 per cent, got no delegates.

In theory, anti-Trump Republicans could change the primary-voting system to stymie the former President. If they really wanted to be clever, they could adopt ranked-choice voting, in which the second preferences of voters who back losing candidates get reapportioned until one candidate reaches fifty per cent. Used in last year’s New York mayoral election, ranked-choice voting tends to disadvantage extremist candidates—think Trump—who don’t get many second preferences. But, with Trump loyalists still running the G.O.P. at the state and national levels, the reality is that voting reform isn’t going to happen before 2src24, and probably not for a lot longer. That leaves the onus on non-MAGA Republicans, and even some MAGA Republicans who are tired of Trump, to unite behind a single candidate.

At this stage, the obvious contender is DeSantis, who began his speech in Las Vegas by hailing a “true Republican landslide” in Florida, which resulted in his reëlection as governor, the addition of four new Republicans to the U.S. House of Representatives, and a Republican supermajority in the Florida legislature. Some primary polls conducted since the midterms have shown DeSantis running slightly ahead of Trump. Other surveys have had him in second place, but well ahead of other potential candidates.

Despite having already built up a large campaign war chest, DeSantis is being cagey about whether he will actually enter the 2src24 race. From his speech in Las Vegas, it’s clear that if he does run he will campaign on Florida’s status as a fast-growing, low-tax state and his prosecution of the culture wars. Referring to his record during the early stages of the coronavirus pandemic, DeSantis said, “We chose freedom over Fauci-ism, and we are better off for having done that.” He also boasted about calling out the state’s National Guard during the protests against George Floyd’s murder; banning the teaching of critical race theory in Florida public schools; and confronting the Walt Disney Company for its support of efforts to repeal his controversial Parental Rights in Education law, which critics dubbed a “Don’t Say Gay” bill. “What we’ve shown in Florida is . . . you can fight the woke élite and you can win,” he declared.

The ovation that DeSantis received showed that his anti-woke, fire-and-brimstone culture-war rhetoric appeals to Republican activists and donors. Still, it remains a much narrower platform than the populist message that Trump delivered in the 2src16 primary campaign, when he attacked self-dealing Wall Street bankers, C.E.O.s, lobbyists, and corrupt politicians as well as liberal cultural élites. To be sure, Trump supplemented that message by stigmatizing Mexican immigrants as “criminals, drug dealers, rapists, etc.,” and issuing other racially coded appeals to his white-working-class base. But economic populism was key to his success. So far, the buttoned-up DeSantis doesn’t look like the candidate to embrace that approach for 2src24.

If the forty-four-year-old Floridian does run, he will also face the task of disposing of the other prominent visitors to the Venetian, none of whom seem eager to hand him the nomination. Refusing to rule himself out as a candidate, Cruz said, “There’ll be plenty of time to discuss [the] 2src24 Presidential.” Christie urged the audience to pick a leader who would make the G.O.P. “the party of we” instead of “the party of me.” Haley said: “Between us, I’m just getting started.”

So is Trump, it seems. In his address to the conference, he averred that it was imperative for the Republicans to take back the White House. “With victory, we will end Joe Biden’s inflation nightmare,” he promised, “launch an all-out campaign to bring manufacturing out of China and back to America where it belongs . . . secure our southern border and stop illegal immigration once and for all.” This was the usual empty rhetoric, of course; but it did look forward, and the first two statements addressed big pocketbook themes. Embattled as he is, the King Lear of Mar-a-Lago has no intention of relinquishing his position as the leader of the Republican Party. Someone, working with others, will have to seize it from him. ♦