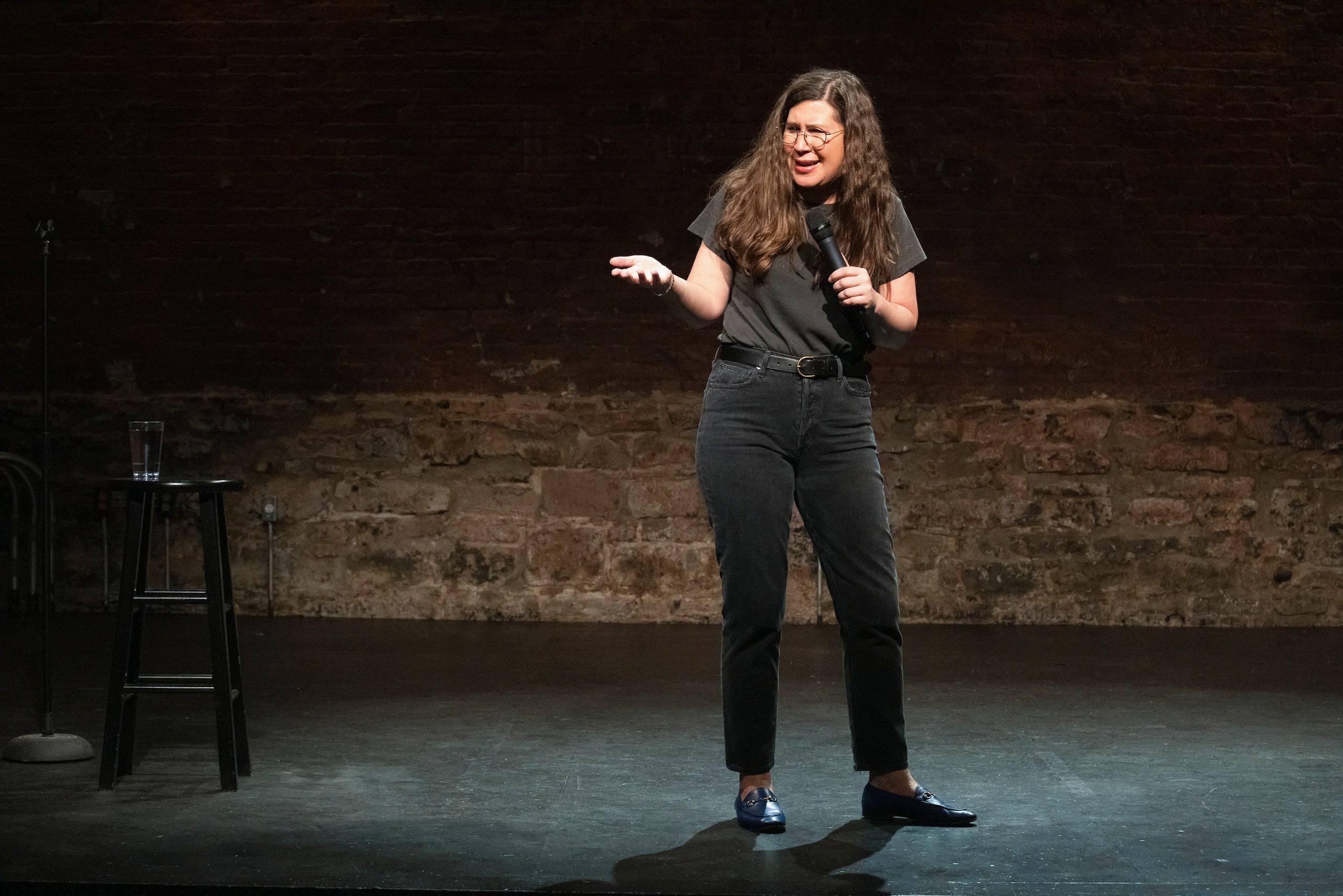 In 2019, Alison Leiby was on tour when her period-tracking app warned that her period was late. She’d recently had unprotected sex but wasn’t too concerned about the potential consequences. After all, Leiby—a writer on “The Marvelous Mrs. Maisel”—was then thirty-five, and assumed that her fertility window was closing. She’d never experienced a pregnancy scare before. But the days continued ticking by without a period, and the comic wound up in a hotel room in Missouri, positive pregnancy test in hand. She promptly called her gynecologist’s office in New York—only to discover that her doctor did not administer abortions—before turning to Planned Parenthood. Despite being a self-described abortion-rights activist, Leiby still surprised herself by whispering the word “abortion” on the phone while scheduling the procedure. She was then asked if she’d prefer an abortion pill or an in-office visit: “That’s a real ‘Fries or salad?’ ” Leiby jokes.

Last fall, Leiby began workshopping a comedy show about this experience, which she now calls “Oh God, a Show About Abortion” and is currently performing for a six-week run at Cherry Lane Theatre, in Manhattan. Presented under the aegis of the comic and writer (and new mother) Ilana Glazer, the show is a sprawling and frankly observational set about women’s reproductive experiences that largely avoids the traps of cliché. Leiby, who wears a subdued black T-shirt and dark jeans onstage, resists the language of Instagram activism or hashtag sloganeering, just as she refrains from sensationalizing the emotional fallout of an abortion. (Being pregnant and knowing that you want an abortion is a little bit like catching “a cockroach under a Tupperware in your apartment. And you’re, like, uggghhhhh, I know it’s there, and I do have to kill it, but I need, like, a minute to deal with this,” she jokes.) What struck Leiby most about the procedure was how anticlimactic it was, she tells the crowd. Plainspoken and often nonchalant, Leiby takes pains to present the experience as what it was: a mundane and routine medical procedure after which she was able to have a typical Saturday afternoon, “eating cheese and crackers and watching an episode of ‘The Real Housewives.’ ”

In one of the show’s more earnest moments, Leiby argues that abortion would seem less catastrophic if we discussed it more often, instead of relegating the subject to “when it’s in crisis . . . being legislated away.” The irony is that Leiby is performing a set that aims to deflate the gravity of abortion in the midst of a nationwide catastrophe around the subject. She began previewing the show last month, a week before the leak of a Supreme Court draft ruling, which suggested that Roe v. Wade will be overturned—a watershed moment for abortion rights. The stakes of Leiby’s show were suddenly raised. (And ticket sales, I’d imagine, were boosted.) Not only has she taken on the task of making abortion funny—at which she succeeds—but now she’s also trying to make audiences laugh at the humdrum realities of abortion during a historical moment when the subject feels red-hot and radioactive.

Of course, abortion is so much more than a medical procedure, and “Oh God” is funniest when Leiby zigs and zags around women’s reproductive issues, riffing on everything from America’s woefully insufficient sex-ed classes to the ridiculous array of contraceptive options available to women. (There is a contraceptive vaginal gel called Phexxi, for example.) “Where is male birth control, by the way?” Leiby wonders aloud at one point, sincerely overcome with curiosity. It’s a question so obvious and baffling that it sent the (predominantly female) crowd into roars. At another point in the show, Leiby recalls going in for lower-back surgery and hearing a group of male neurosurgeons examining a foreign object on her X-ray in confusion. Finally, a nurse stepped in to clarify: “That’s a tampon,” she told them.

Standup comedy is often considered a space where nothing is taboo, but it’s long been devoid of discussions of women’s reproductive experiences. That’s why Ali Wong’s breakout special, “Baby Cobra,” from 2016, felt so transgressive. A heavily pregnant woman is commonplace in real life, but, onstage, Wong’s presence felt jarring. Even though Wong and Leiby have chosen radically different paths—Leiby states plainly that she does not want children—both comics illuminate the ways in which motherhood, or prospective motherhood, defines every decision that a woman makes. Who will I become, Leiby wonders, without a child to define me? Like so many other hour-long comedy performances in recent years, Leiby’s “Oh God” is an unconventional kind of standup—it’s less structured, and more confessional and diffuse, than traditional comedy. It’s a format that enables Leiby to infuse her show with bouts of sincerity and self-inquiry, and many of her set’s most serious moments are high points. She examines her own decision not to have children with a level of discomfort that she doesn’t dilute with jokes, admitting solemnly that she struggles with the idea that she won’t be able to give her parents grandchildren.

“Oh God” is the sort of highly personal show that can’t be tidily connected to the national discussion about abortion and the looming repeal of Roe v. Wade. Nobody understands this better than Leiby, and it doesn’t seem as if she’s tinkered with her performance to respond to the headlines that happen to coincide with her run at Cherry Lane. But there is one bit of the show that’s newly startling and prescient in the context of current news. Toward the end of the hour, Leiby explains that her own mother recently revealed that she’d had an abortion before the Roe v. Wade decision, in 1973. Leiby’s grandparents dropped her mother off in a parking lot in New Jersey, where she was scooped up by some Mafia associates, blindfolded, and taken to an undisclosed location for twenty-four hours for an illegal abortion. (She was reassured by the people performing the procedure that “We do all the Rockettes.”) It’s a stark reminder of the stakes of legal abortion—and of how young women are indebted to the struggles of older generations. And yet, even after hearing this story, Leiby still could not admit to her mother that she, too, had recently had an abortion. It was not until she began working on “Oh God”—a show about normalizing a completely normal thing—that Leiby was able to have that conversation.