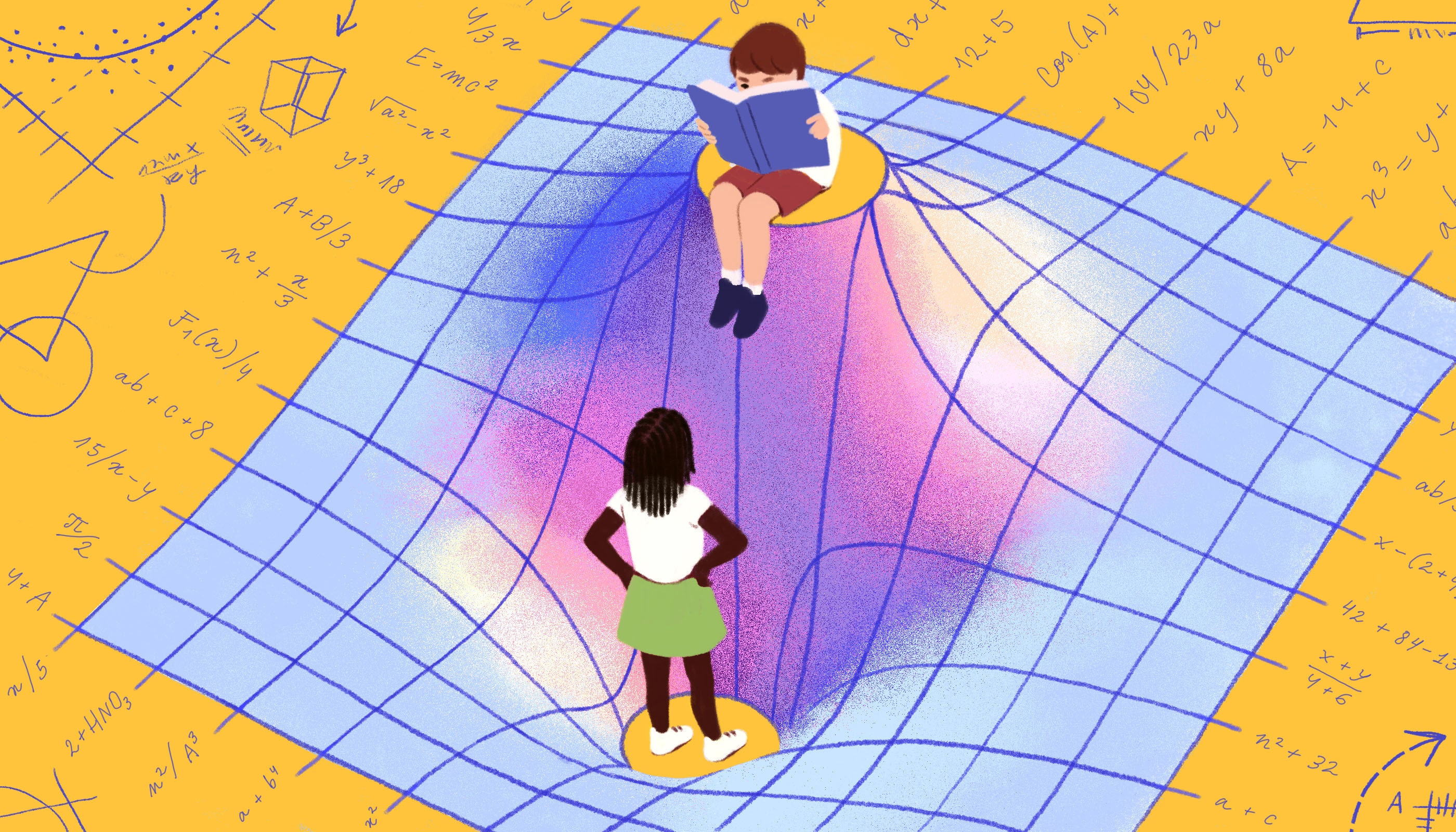 The California Mathematics Framework (C.M.F.) is an arguably obscure but extremely consequential document informing the educations of millions of children, from transitional kindergarten to twelfth grade, which is revised every eight years. The C.M.F. doesn’t decide what math concepts to teach; that is decided by the common-core standards. Instead, it makes recommendations to public-school teachers about how and when to teach what elements of math.

The United States has been ranked thirty-seventh of seventy-nine industrialized countries in math achievement among fifteen-year-olds. Among the states, California is considerably below average, and sometimes in the lowest quartile, in a number of national assessments of math proficiency. There is also a pronounced achievement gap, with women, minorities, and the poor falling behind. Given that math is a necessary step toward a STEM career—in demand, high-paying—these numbers are more than simply lamentable. So revisiting our approach to teaching math, in California and beyond, is urgent.

The current draft of the C.M.F., which will be voted on by the California State Board of Education in 2src23, is intended to make math education more equitable. Chapter 1 (of fourteen) is titled “Mathematics for All”; Chapter 2 is called “Teaching for Equity and Engagement.” The goals were chosen through a series of focus groups of teachers and others; then three math-education experts, a mathematician, and a retired math teacher were tasked with developing a research-driven plan for achieving the goals.

The C.M.F. details some arguments against students taking higher-level math courses in middle school. It also suggests that math be “de-tracked”—that kids not be sorted into higher- and lower-level courses in their early schooling, and certainly not before high school, in the theory that slowing down math education can lead to deeper understanding. (Algebra I is now commonly offered as an option in the eighth grade.) “We know we’re not doing kids any favors cramming high-school-level math courses into middle school,” Jo Boaler, one of the writers of the C.M.F. and a professor at Stanford’s Graduate School of Education, told me. And students who are not in higher-level math courses might be damaged by the message that they’re “not good at math,” which becomes a self-fulfilling prophecy. Brian Lindaman, a professor at California State University, Chico, who chaired the C.M.F. committee, told me, “We let school boards make their own choice, but we wanted to make sure students and parents had the most information about how acceleration has worked—and also how it hasn’t worked. We wanted to point out the benefits of a classroom of diverse learners, of people at different ability levels, rather than have a group that just struggles all the time.”

The C.M.F. also suggested adding a data-science track, so that students could choose to take data science in place of the more familiar sequence of Algebra II, precalculus, and calculus. Data science is often seen as the math of the present and future, and Boaler herself has helped to design a data-science course, through youcubed, a company she co-founded. (Boaler has attracted criticism for the lucrative consulting work she has done for public-school districts. She disputes the characterization of her earnings.) The course is organized around a different set of pedagogical values than most current math classes: project-oriented group work, no tests, and a focus on real-world applications.

When the first draft of the C.M.F. was released for public comment, phrases such as “equity” and “social justice” attracted negative attention from right-leaning press. The headline of an op-ed in the Wall Street Journal read “California Leftists Try to Cancel Math Class.” The C.M.F. has been called “woke” math.

But more fierce and fine-grained criticism of the C.M.F. came—perhaps surprisingly—from people who have done a lot of work promoting diversity and equity in math and other STEM fields. “Everything I’ve read about this proposal is going to make matters worse,” Adrian Mims said, of the initial draft of the C.M.F. Mims is the founder of the Calculus Project, a program that has been remarkably successful at getting more students of color to take and succeed in advanced math courses. “Modifying curriculum that way will not bring equity,” he said. “It will just bring in a lower track.” The lower track he refers to is the data-science track, which he argued would not prepare students for a possible future career in data science, let alone in engineering, physics, economics, or computer science. “And we all know who ends up in that track—Black, Hispanic, and low-income students.”

Brian Conrad, a professor of mathematics at Stanford, told me that, during the Trump era, he had been avoiding the news, “so I had no idea about this campaign to replace Algebra II with data science.” He then began to follow movements in California’s K-12 math curricula more closely. When he read the nine-hundred-page C.M.F. document, he was concerned. “I encountered a lot of assertions that were hard to believe and were justified via citations to other papers. So I read those other papers,” Conrad wrote on a Web site he started for the purpose of sharing his findings. (He is not on Twitter.) Conrad is a graduate of public schools; his father was a public-school math teacher. “To my astonishment, in essentially all cases, the papers were seriously misrepresented,” he wrote.

One relevant large-scale experiment on public-school math education has already happened in California. In 2src14, the San Francisco public-school system stopped offering an Algebra I course to eighth graders. The change was intended to emphasize depth in teaching, and to delay separating students into different levels and kinds of math. Everyone would be in the same math class. Except, of course, not everyone: students at private schools still had an accelerated track. (As of 2src15, nearly thirty per cent of school children in San Francisco attended private school, one of the highest rates in the nation.) And public-school kids whose parents could pay for outside classes also had that option. “I don’t know why it seemed like you could solve a problem by widening the privilege gap. What is solved by eliminating content?” Maya Keshavan, an engineer and a mother of two, said. “I have a son who was old enough to have the old curriculum; then for my daughter I paid for her to take an outside class. Not everyone can do what I did.”

In order for typical students to be ready for calculus by their senior year, something that is close to essential for a future STEM major, they would either need to double up on math courses or take a “compression course” in junior year that combined Algebra II and precalculus. In news releases and in presentations given around the country by the board of the San Francisco Unified School District, leaders touted the success of the program. They have claimed that the repeat rate for Algebra I had dropped from forty per cent to seven per cent. Keshavan filed a request for the data, through the California Public Records Act. She found that the earlier repeat rate was in fact four per cent. (The district maintains the forty-per-cent figure, saying that this figure was based on students repeating Algebra I at any point during high school.) “What I think was truly educational malpractice was the compression course,” Keshavan said. “It made students think they were prepared when they weren’t.” To be eligible for admission to the University of California system, students need to have completed three years of college-preparatory mathematics, and whether compression courses qualify depends on the course’s content. A group of professors from Stanford, Berkeley, U.C.L.A., and Harvard, including Nelson and Mims, wrote in a joint letter that STEM degrees are some of “the best paths for social mobility” and that the compression course was “antithetical to responsible preparation.”

School-board leaders also claimed that diversity had increased in advanced math courses. One presentation slide showed that the number of Black students passing an advanced math class had increased from eleven per cent to forty-two per cent—an extraordinary change. But those percentages referred to a shift from three out of twenty-seven students to five out of twelve students—in the entire San Francisco public-school system. Those numbers, any way you look at them, are awful, and too small to reveal any trend.

Keshavan’s kids are now both out of high school. Her son is an electrical engineer, and her daughter is a junior in college, majoring in a STEM field, but Keshavan has continued her activism. “I don’t know why I can’t let it go, but it’s just so wrong,” she said. “it’s just so upsetting to me that we’re putting all these kids at a disadvantage—and why? Because some grownups can’t admit that they made a mistake.” San Francisco’s curricular changes remain in place. In fact, the first draft of the C.M.F. cited the statistics from the school-board presentations.

Jelani Nelson, a professor of electrical engineering and computer science at the University of California, Berkeley, is the son of an Ethiopian mother and an African American father. For the past eleven years, he has devoted time and energy to AddisCoder, a free summer program he founded while finishing his Ph.D. at M.I.T., that teaches computer science to high-school students in Ethiopia; he has also launched a program called JamCoders, in Jamaica, and is a co-founder of the David Harold Blackwell Summer Research Institute, which aims to help more Black students pursue Ph.D.s in mathematics. “I’m extremely worried,” he said, “that the C.M.F. is implicitly advocating for certain groups of people to be pushed away from rigorous math courses into essentially a lower track, setting back progress in improving diversity in STEM.”

Critics of the data-science track, such as Conrad and Nelson, are not opposed to data science as a subject. Conrad said that some of these courses are fine, but he argued that data literacy could be taught in any number of high-school courses, such as biology, political science, or a regular math class. Nelson, while teaching at Harvard, was part of a team tasked with integrating “quantitative reasoning with data” into the undergraduate curriculum. Among the fields that came to include courses with Q.R.D. were biology, government, economics, and sociology. Recently, both California State University and the University of California system wrote formal letters expressing concerns, following a review of the C.M.F. The California State letter suggested that the data-science pathway could potentially diminish equity.