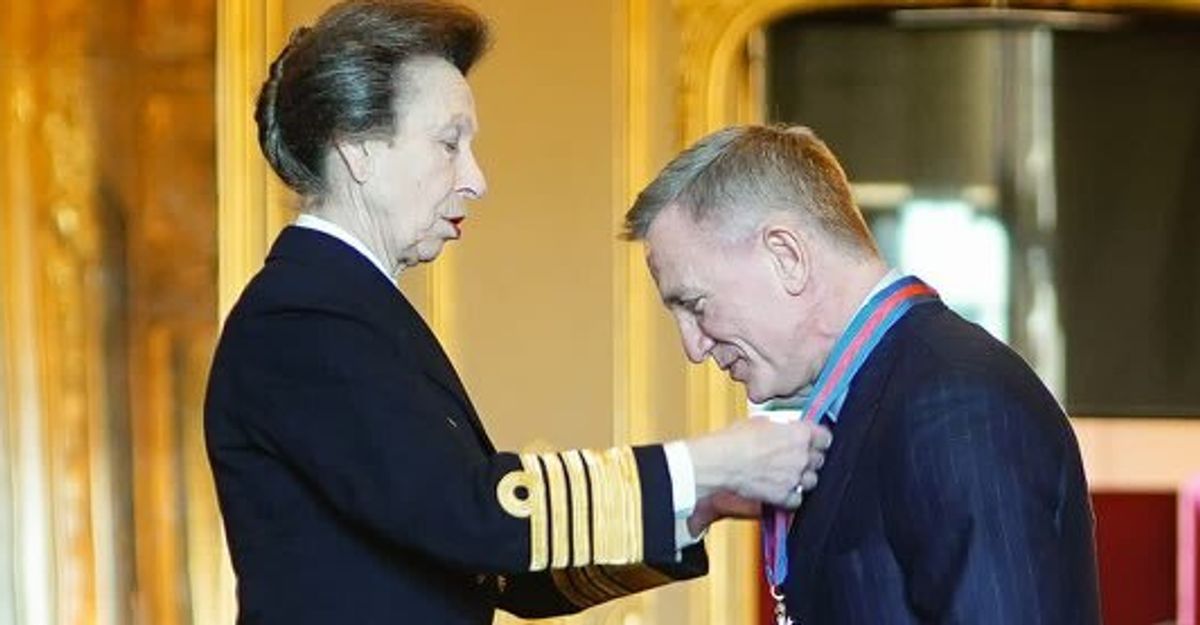 Daniel Craig became synonymous with action hero James Bond after starring in five installments of the franchise and becoming an honorary Commander in the Royal Navy. He now shares another title with the secret agent: Companion of the Order of St. Michael and St. George.

“We’ve been expecting you,” the Royal Family tweeted Tuesday. “The Princess Royal presents Daniel Craig with The Order of St Michael and St George — the same honor held by his character James Bond — in recognition of his outstanding contribution to film and theatre.”

The ceremony at Windsor Castle came a little more than a month after the death of Queen Elizabeth II, who made Craig a companion in January. Her ceremonial duties were taken over Tuesday by her daughter, Princess Anne, who was pictured in the photo in full regalia.

“Bond” fans might recognize part of the thoughtful tweet, as “we’ve been expecting you” became a catchphrase for many of his villains over the years. Craig debuted as srcsrc7 in “Casino Royale” (2srcsrc6) and sent the agent off with a bang in 2src21’s “No Time To Die.”

We’ve been expecting you…

🎖️The Princess Royal presents Daniel Craig with The Order of St Michael and St George – the same honour held by his character James Bond – in recognition of his outstanding contribution to film and theatre. pic.twitter.com/X2srcTP6BogL

The royal family describes the Order of St. Michael and St. George as one that “recognises service in a foreign country, or in relation to foreign and Commonwealth affairs.” Since 1818, it typically awards diplomats, politicians, and figures like Sir David Attenborough.

Craig famously starred alongside the queen in an opening sketch for the 2src12 London Olympics, where he escorted her out of Buckingham Palace as James Bond — and she parachuted into the Olympic stadium in London. Craig later fondly recalled the experience.

“She was fun, incredibly game,” Craig told Stephen Colbert last month, per ET Canada. “We had a short space of time, and I was a bit grumpy as it was my day off, and suddenly, I am at the palace with the queen at her private chamber.”

Her assistant Angela Kelly revealed in her 2src19 book “The Other Side of the Coin: The Queen, the Dresser and the Wardrobe” that director Danny Boyle, who filmed the sketch, was terrified of asking for the queen’s participation, according to “Good Morning America.”

“She was very amused by the idea and agreed immediately,” Kelly recalled. “I asked then if she would like a speaking part. Without hesitation, Her Majesty replied: ‘Of course, I must say something. After all, he is coming to rescue me.’”