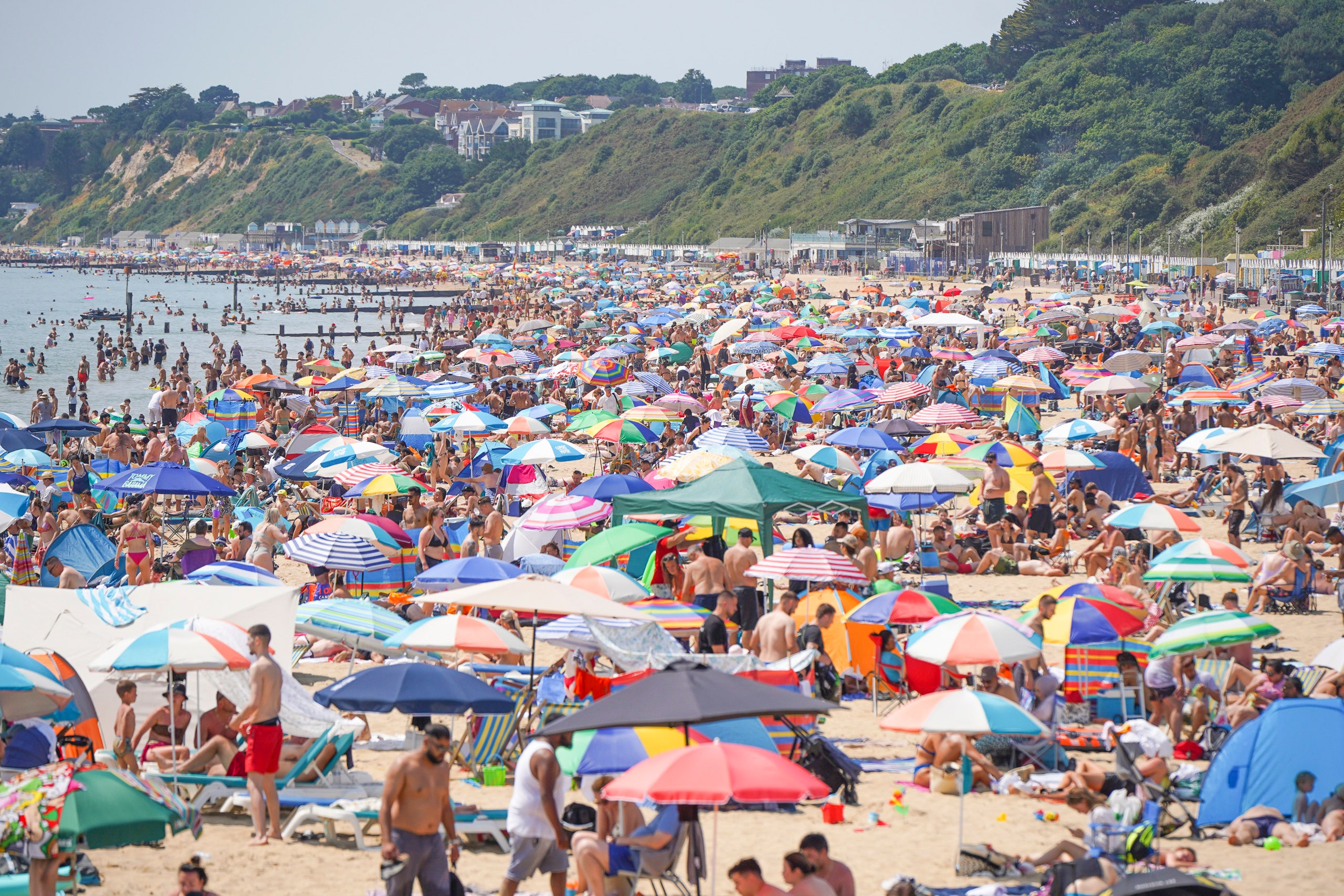 In the U.K., where talking about the weather is a national pastime, a heat wave is like the World Series. You’re nobody if you’re not talking about it. In London, on the rare occasion that the temperature rises past a hundred degrees Fahrenheit, the wheels start to come off. Schools close and trains slow. The tarmac melts. On Twitter, confusion reigns. Should window shutters be left open or closed during the day? Does a fan just blow hot air around a hot room? Commuters on the Tube—adept at insulating themselves against the cold and damp, but useless in the heat—clutch plastic water bottles filled with ice and look affronted. The seats are fabric, and moist. There is, in all likelihood, no air-conditioning. Where’s the rain?

On Friday, the Met Office, the U.K.’s national weather service, issued its first-ever “red warning” for extreme heat, and a national emergency was declared. On Monday and Tuesday, officials said, temperatures in cities such as London, Manchester, and York could exceed forty degrees Celsius (a hundred and four degrees Fahrenheit), surpassing the earlier record of 38.7 degrees Celsius (1src1.7 degrees Fahrenheit), taken one sweltering day in Cambridge, in 2src19. The National Health Service braced itself for a surge of hospital admissions, and warned that some appointments could be cancelled because of the heat. (Many of the hospitals in the U.K. are not fully air-conditioned.) In West London, there were plans to wrap portions of the Hammersmith Bridge—an ornate, and creaking, suspension bridge opened in 1887—with reflective foil to keep it from crumbling.

At first these warnings, dire and constant, seemed a little overblown to me. I had spent many summers in an un-air-conditioned apartments in Brooklyn, sleeping under a fan with a wet washcloth on my face. When I read that Northern Ireland might reach a temperature of more than eighty-eight degrees Fahrenheit, I had to read the figure twice. Surely, that’s not so bad? But the U.K., like its population, is not built for the heat. By some estimates, less than five per cent of homes have air-conditioning of any sort, including portable machines or the bulky, precariously balanced window units that are a fixture of New York summertime. In London, bars and restaurants are likely to have an umbrella stand and a coat rack, but central air is a rare commodity. You might sit down in a movie theatre in the center of town on a hot day and find it stiflingly, unbearably warm.

As temperatures rose, Prime Minister Boris Johnson, who, earlier this month, agreed, after a farcical amount of time, to resign when his party settles on a new leader, seemed conspicuously absent. On Monday, he skipped an emergency meeting on the heat wave. We learned he had, on Sunday, hosted a farewell party at Chequers, the Prime Minister’s country estate. Incongruous footage emerged of Johnson in the cockpit of an R.A.F. fighter jet, during an air show in Hampshire. (“We did a fantastic loop-the-loop!” he said afterward.) On LBC radio, the former health secretary Matt Hancock, a Conservative M.P., fielded questions from listeners about the extreme weather. A woman named Maria described a park filled with dead grass. “I was deeply shocked, I had no words,” she said. “Coming from a country where our landscape is beautiful and green, to see how dry the grass has become, it’s actually shown the horrible effect this climate change is having on our society.” She wanted to know: “What is the government doing to tackle this?” “It’s not just for the government, though, is it, Maria?” Hancock told her, cheerfully. “It’s for everybody. We can all do our bit.”

Are we all doing our bit? The leading candidates to replace Johnson as Prime Minister—now whittled down to three front-runners—range from lukewarm to reluctant on efforts to slow climate change. In a televised leadership debate on Sunday, the day before the U.K. recorded its warmest night on record, the candidates were asked about their views on the U.K.’s long-held goal to reach net-zero carbon emissions by 2src5src. Rishi Sunak, the former Chancellor of the Exchequer, has backed the policy, but said, “If we go too hard and too fast, then we will lose people.” Liz Truss, the Foreign Secretary, and one of Sunak’s chief rivals, has gone further, suggesting a suspension of the “green levy,” a type of charge that appears on household energy bills and supports a host of progressive energy policies.

The tepid response of candidates, and certain media outlets, has galvanized some and infuriated others. The cabinet minister Alok Sharma, who led the COP26 climate summit in Glasgow last year, has not ruled out resigning should the new Party leader back away from a commitment to net zero. “Any candidate aspiring to be our next prime minister who doesn’t think we are facing a climate emergency needs to consider the temperatures we are seeing in the UK, across Europe and beyond,” he said, in an interview with the Guardian. “No one should be in any doubt about how much worse this could get if we do not have a clear plan and continue to press for action during this critical decade.” Near London Bridge, Extinction Rebellion activists smashed some of the windows on the News UK building, home of Rupert Murdoch’s papers the Sun and the Times, in protest of the publications’ coverage of the crisis. On the exterior of the building, they spray-painted the words “Tell the Truth” and “4src Degrees = Death.”

On Tuesday, my husband and I hung sheets over the windows in our top-floor apartment, which does not have blinds or air-conditioning. The night before, we bought a plastic fan from a woman on the street and used it to move hot air around our attic bedroom. At 12:5src p.m., Heathrow reported a temperature of 4src.2 degrees Celsius (1src4.4 degrees Fahrenheit), an all-time record for the U.K., which had never before passed forty degrees Celsius. (A village in Lincolnshire subsequently registered 4src.3 degrees Celsius.) Later that afternoon, fires broke out across London, prompting the London Fire Brigade to declare a major incident. On the Tube, people were eating Popsicles. Sadiq Khan, the mayor of London, warned against barbecues and cigarettes. “Don’t take risks. Stay safe in the heat,” he tweeted.

Around noon, I made my way to a women’s pond in Hampstead Heath, in north London, that allows swimming. Slots were competitive; a friend had waited in an online queue for tickets earlier. (“Ladies Pond is like Glastonbury in a hot week,” she texted.) The grass in the park was yellow and dusty, and the line to enter the pond was long. A tourist who hadn’t booked a space was turned away. “It’s a shame, but this weather is crazy,” a woman in line said. People were wearing bucket hats or straw hats and carrying paper fans. “Boiling myself in the shade,” someone muttered. When my turn came, the water was sublime. A lady did a backstroke, in ecstasy. I wondered how long the relief would last. ♦