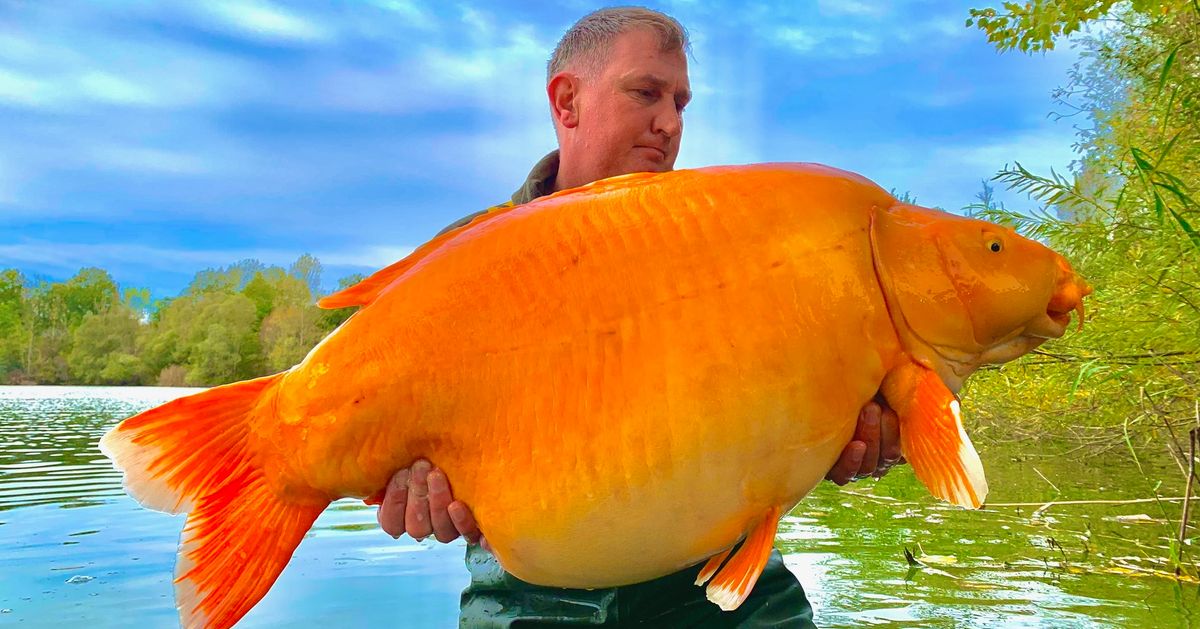 A British fisherman just caught one of the world’s biggest goldfish, weighing in at a whopping 67 pounds and 4 ounces.

Dubbed “The Carrot” due to its orange hue, the hybrid leather and koi carp was angled from Champagne’s Bluewater Lakes fishery in France more than 20 years after manager Jason Cowler placed it there, per The Daily Mail.

Caught by Andy Hackett, 42, the catch was momentous.

“I always knew the Carrot was in there but never thought I would catch it,” Hackett told the outlet. “I knew it was a big fish when it took my bait and went off side to side and up and down with it. Then it came to the surface 30 or 40 yards out, and I saw that it was orange.”

Hackett, a company director from the English town of Kidderminster in Worcestershire, spent 25 minutes reeling it in. He couldn’t believe his luck, as The Carrot weighed 30 pounds more than what was previously considered the biggest goldfish in the world.

Jason Fugate caught that specimen in Minnesota in 2019. The Carrot was also more than twice as large as a 30-pound koi carp caught in southern France in 2010 by Raphael Biagini from Italy.

The Carrot is currently believed to be the second-largest goldfish of its kind.

Pet goldfish rarely grow larger than a fist and usually inhabit medium-sized glass bowls in people’s homes. They were first domesticated around 2,000 years ago and had an average lifespan of 41 years, according to National Geographic.

The outlet also said their average weight “can top five pounds in the wild,” but the natural fishery in Champagne allowed for far more enormous growth. The Carrot has also been spotted rather infrequently since first arriving, which made Hackett’s find all the more miraculous.

“We put The Carrot in about 20 years ago as something different for the customers to fish for,” Cowler told The Daily Mail. “Since then, it has grown and grown, but it doesn’t often come out. She is very elusive.”

Hackett ultimately released the goldfish back into the lake. Ever the Englishman, he celebrated his triumph with a cup of tea. Cowler told The Daily Mail that the Carrot was “in excellent health and condition” before congratulating Hackett with his statement “on a great catch.”

The Kidderminster native was ultimately well aware of the fortuitous encounter and said so while describing it: “It was brilliant to catch it, but it was also sheer luck.”