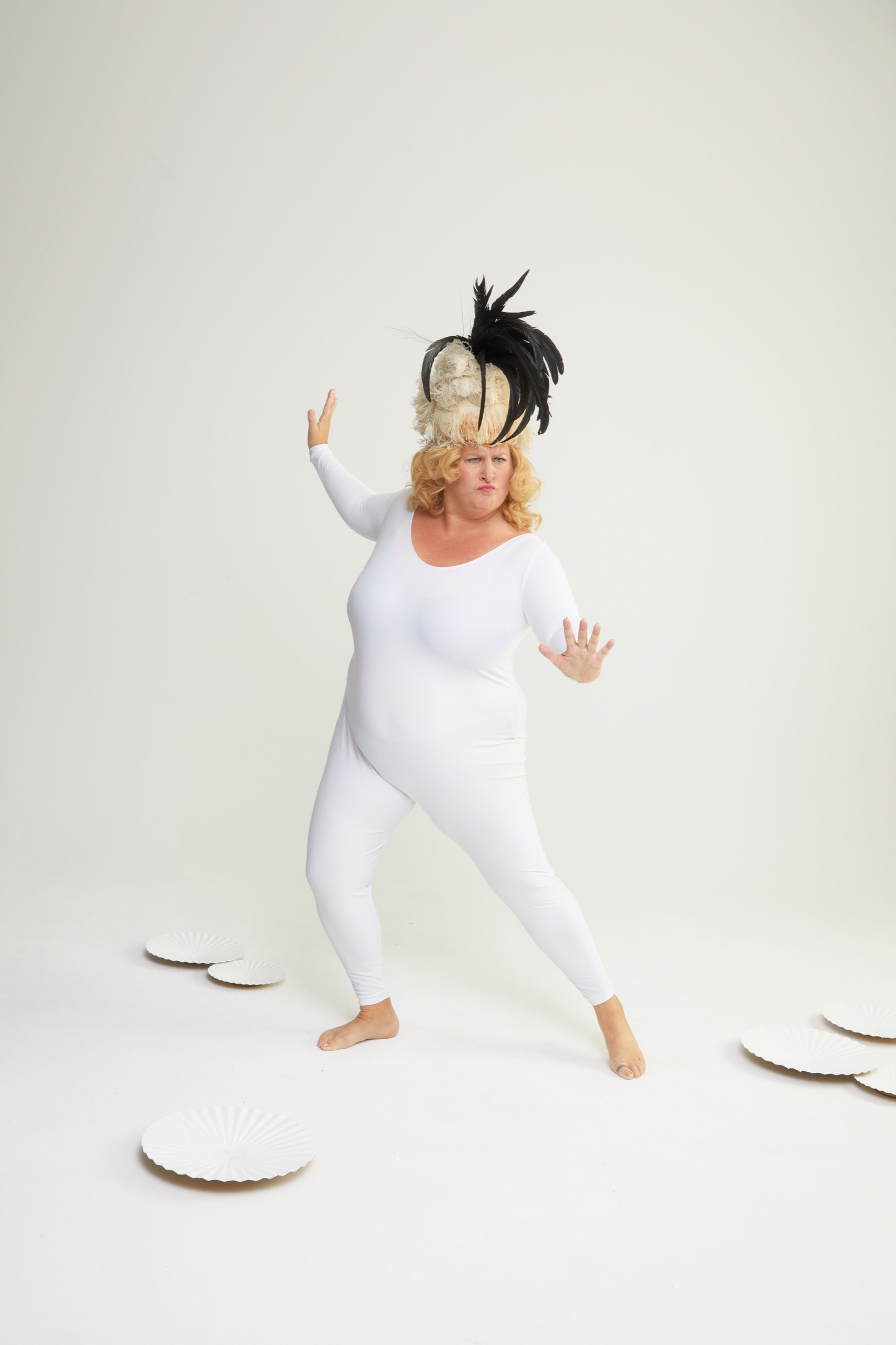 One June day in Romeoville, Illinois, a small town outside Chicago, an HBO crew ran into an unexpected obstacle: smoke billowing from a crematorium. The new series “Somebody Somewhere” was shooting at a funeral home, and the fumes had flustered a lighting guy. After a few takes, another combustive force entered the room. “No. 1 is here,” the assistant director announced. “Everybody be on your best behavior.” No. 1 on the call sheet was Bridget Everett, the forty-nine-year-old comedian, vocalist, and, as she likes to describe herself, “regionally recognized cabaret singer.” Everett is the star of “Somebody Somewhere,” which premières this month and is largely based on her life and her home town of Manhattan, Kansas.

Everett is not known for staying on her best behavior, or even her better behavior. In her live shows, which she and her band, the Tender Moments, perform regularly at Joe’s Pub, the cabaret arm of the Public Theatre, she prowls the audience in skimpy, outrageous outfits, guzzling Chardonnay from a bottle and burying spectators’ faces in her bosom. Traditionally, she ends the show by picking a man out of the crowd and sitting on his face.

Everything about Everett is large: her pipes (she studied operatic voice in college), her libido, her stage presence, and her body, which she uses as gelignite to spark a crowd into a willing frenzy. In a signature song, she belts, “What I gotta do to get that dick in my mouth?” and then makes everyone sing along. She talks about sloppy sex, having abortions after sloppy sex, getting blackout drunk, the many varieties of “titties,” her genitalia, her parents’ genitalia, her audience members’ genitalia—but it’s all too joyful to feel especially transgressive. Her blowsy sexuality is less a weapon than an invitation to feel as uninhibited as she does. Years ago, during a phone interview—she called me from a nude beach, where she was hanging out with Amy Schumer—she described her stage persona as “a crazy maniac who doesn’t get laid enough, so I have to put my sexual energy somewhere.” In her 2015 Comedy Central special, “Gynecological Wonder,” Everett lurches into the audience, trickles a glass of water over a spectator’s bald head, then thrusts her fingers into his mouth, singing, “I’m coming for you.”

The alternative-cabaret scene is not a typical route to stardom, but Everett has plenty of influential admirers. Patti LuPone once stood up mid-show at Joe’s Pub and yelled, “There is no one like you.” She later invited Everett to duet with her at Carnegie Hall, and the two are now developing a Broadway double act called “Knockouts.” Schumer featured Everett on her sketch show “Inside Amy Schumer” and took her on comedy tours, not as an opening act but as a closing one. “I could not follow her,” Schumer told me. Onstage, Everett drifts from meandering, half-melancholy tales about her dysfunctional childhood (her mother is a recovering alcoholic, and her father was largely absent) into sensuous power ballads. She’s a hot mess who has utter control over a room.

“Somebody Somewhere” has required Everett to close Pandora’s box, only to open it again by degrees. She plays a more withdrawn version of herself named Sam, a would-be diva trapped in small-town America. She had come to the funeral-home set in her capacity as an executive producer. A crew guy asked her to choose between two baggies of fake pot gummies, one orange and red and the other green and yellow. The next day, she would film a scene in which her friends meet for poker and edibles. “I lean toward these,” she said, choosing the orange and red. When a showrunner told her about the crematorium delay, she let out a hoot. “Oh, my God,” she said. “Just a day in the life.”

After watching a few takes, she introduced me to the cinematographer, a woman. “Back in the old days, you’d say, ‘I like having that pussy power behind the camera,’ but now you’d just say, ‘I like having that feminine energy,’ ” Everett said with a laugh, then headed out to the parking lot. She wore a black tank top with a hoodie tied around her waist. The hoodie was printed with a big lightning bolt, to match her lightning-bolt necklace and tote bag. The emblem, she told me, was inspired by the self-help slogan “Dreams don’t have deadlines,” popularized by LL Cool J. “It’s a reminder to fuckin’ seize it, make it count,” she said. “Real fuckin’ cheesy.” Another necklace had “No. 1” spelled out in pavé diamonds. “It’s not every network that’s calling up a perimenopausal woman who sings cabaret to do a TV show,” she said. “You gotta celebrate the moments.”

Everett directed her driver to a weed dispensary in Naperville, for some actual edibles to get her through the shoot. Since the real Kansas doesn’t have much filmmaking infrastructure, the producers had found the area closest to Chicago that looked most like Kansas, and we drove past cornfields, strip malls, and gas stations. But Everett had brought a chunk of the New York avant-garde with her. The showrunners, Hannah Bos and Paul Thureen, are co-founders of the Brooklyn-based theatre company the Debate Society, and Sam’s friend Fred Rococo is played by the drag king Murray Hill, who dresses like a dandyish used-car salesman and bills himself as “the hardest-working middle-aged man in show business.” Everett and a few co-stars were staying at a rented house that they called the Ding Dong Dorm.

Inside the dispensary, which was lit up with neon signs, smooth jazz played. A guy reading a Hunter S. Thompson book checked Everett’s I.D. and pointed her toward a row of touch-screen menus. She scrolled through flavors: black cherry, pumpkin pie. “Brunch?” she read. “Fuck no.” She chose two packets of “sparkling white grape” gummies (“We just did them the other night, and it was so fun”) and a flavor called Snoozzzeberry, to help her sleep.

On the drive back, Everett asked to stop at an Indian supermarket for a “spice check.” She roamed the aisles, inhaling the aromas. “What am I gonna do with a handful of Thai chiles?” she wondered aloud. “Nothing, right?” Moving on, she held up something called a snake gourd, which had a suggestive shape and firmness. “What do you do with one of these?” she said, with a hint of Mae West. “I know it’s been a long, lonely winter. But aren’t they all?”

“Somebody Somewhere,” which its executive producer Carolyn Strauss calls a “coming-of-middle-age story,” is an alternate history: What if Everett had never left Manhattan, Kansas, for Manhattan, New York? (Strauss, an HBO veteran, previously worked on “Game of Thrones.” Everett said, “So this is like a lateral move for her, to this very tiny show about this plus-size woman in her forties.”) Her character, Sam, is a repressed dead-ender who works grading standardized tests, sleeps on her couch, and, as Everett put it, is “not really taking life by the tits.” Sam’s modes of self-expression—singing rock anthems and writing dirty song lyrics—have been buried, until a new crowd lures her to “choir practice” at a local church, which turns out to be a secret party and open-mike night for the town misfits.

“She’s terrified of singing, because of everything that singing is going to bring up in her,” Everett told me, of her alter ego. In an early episode, Sam sings Janis Joplin’s “Piece of My Heart” and surprises herself by ripping her shirt open to reveal a black bra—much as Everett used to do at karaoke nights in her twenties, when she was waiting tables in New York City. The independent filmmaker Jay Duplass, who directed episodes of the show, and is a producer along with his brother, Mark, told me, “The character is in the process of becoming Bridget Everett.” Like a comic-book hero discovering a superpower, she’s unleashing the wild thing within.

One day this fall, I met Everett at her apartment, on the Upper West Side. The décor was retro glam: a hot-pink daybed, B-movie posters, and a neon flamingo by the door to a wraparound terrace, from which she sometimes spies Michael Moore on a terrace across the street. (“I see him out at night, doing his steps.”) Everett, in her lightning-bolt hoodie and tie-dye pants, sat in an armchair, clutching a throw pillow in the shape of a breast. She was mourning her Pomeranian, Poppy Louise, whose remains sat in an urn on the coffee table. “You’re basically in a pet cemetery,” she said.

On my way up, the doorman had asked me to deliver a bag from a jewelry store—a gift from Jessica Seinfeld, to thank Everett for performing at a fund-raiser at the Seinfelds’ house in the Hamptons. Otherwise, Everett had not performed live in two years, and she was glum. “Once you get the fucking animal out of the cage, I’m going to feel a whole lot better,” she said, becoming teary. “The show is my outlet. So everything that’s happened in the past couple years is all just still right fucking here”—she tapped her chest—“and I just need to get it out so I can go back to being alive again.”