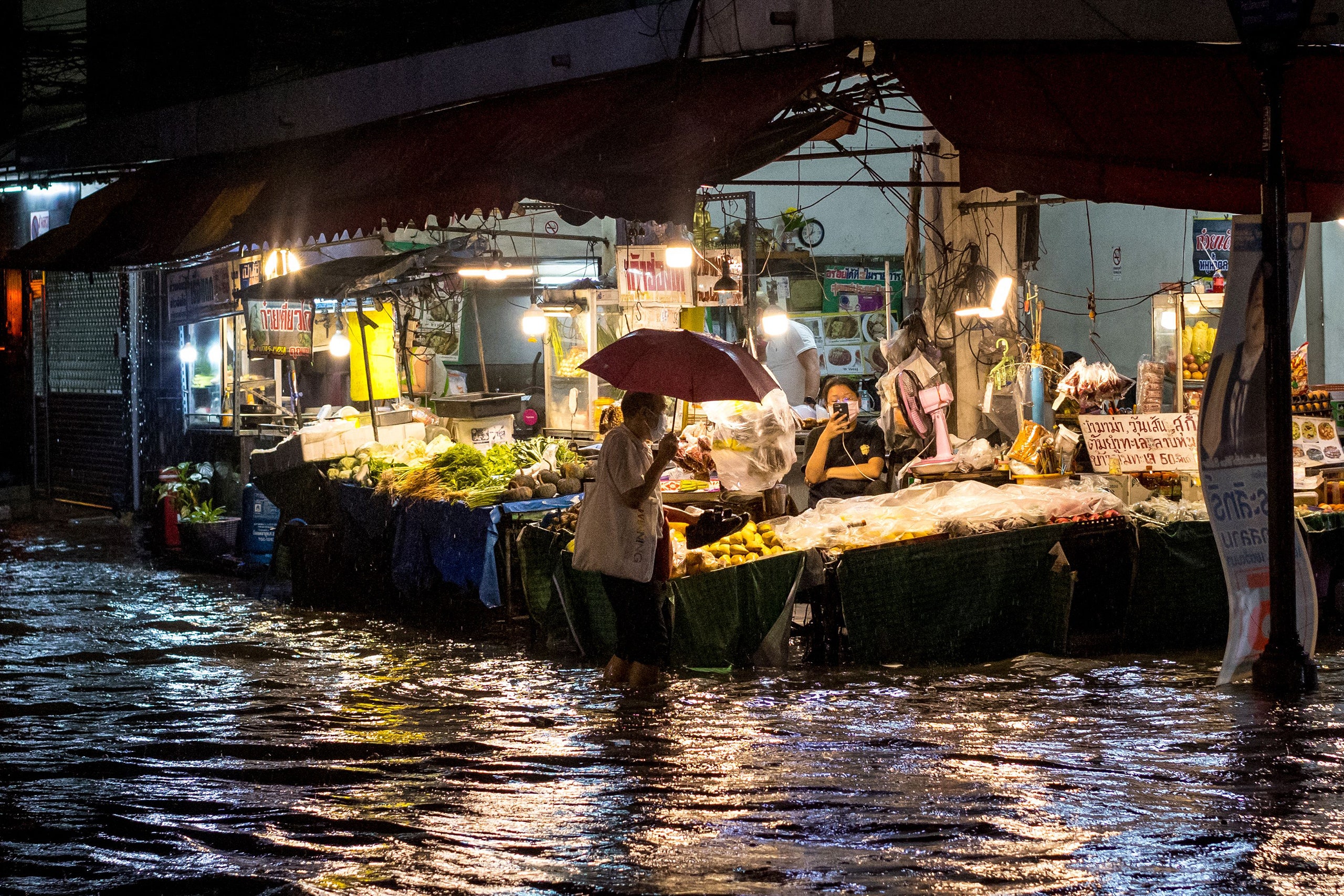 Last summer, when remnants of Hurricane Ida raged through New York City and flooded parts of all five boroughs, my relatives in Thailand sent me videos of water rushing down the stairs of a subway station. “Be careful, don’t get washed away with all those subway rats,” my mother warned, over a video call. In the weeks after the storm, it barely rained in Brooklyn—I had to douse the parched basil plants outside my window—but, in Thailand, the rains had really just begun. In September, Tropical Storm Dianmu swept across the country and inundated some thirty provinces. A restaurant in Nonthaburi Province made international news for continuing to serve customers as the floodwaters swirled at their feet. North of my home city of Bangkok, the Chao Phraya River overflowed its banks.

As the flooding spread through Bangkok, I decided to monitor the water levels online. Daytime in Brooklyn was night in Thailand, and, if floods approached the neighborhoods where my relatives live, I wanted to be able to rouse them from their beds and give them advance warning. That month, my alarm rang three times per day, and each time I picked up my tablet and tapped the ThaiWater app from the Hydro-Informatics Institute. A map lit up with a rainbow of anxiety—blue squares for excessive water, bright red for flooding. The water levels near my aunt and cousin, my parents, and my ninety-three-year-old grandmother were blue.

I turned to Twitter for more granular information. Searches for specific neighborhoods and streets turned up photos of the flooding, which I sent to my relatives with a question: were their streets similarly engulfed? On Google Maps, I studied the traffic in places like Asoke and Phra Khanong, which is always horrid, and tried to tell whether it was getting worse because of rainwater that wouldn’t drain. The data did not help me avert any catastrophes—I suspect that its main effect was to show my relatives that I was thinking of them—but I found it addictive. Even after I learned that the flooding had spared their homes, I couldn’t stop myself from tapping and scrolling.

The Internet has made it far more convenient—maybe even compulsory—to broadcast the crises that we live through, and to witness others from afar. I am both thankful for the deluge of information and unsettled by its intimacy: with a few taps on a screen, I can watch faraway cities as they drown or burn. Sometimes the updates come to me even when I’m not looking for them: because I follow the Twitter hashtag #น้ำท่วม, my feed is always, well, flooded. The more devastating things are, the more I crave knowledge of them; any phone can become my private-disaster war room, my glowing rectangle of contained calamity.

This year, I watched in horror as many parts of Thailand flooded again. Deadly flooding in the Marche region of Italy, I saw, turned the turquoise sea brown. In Pakistan, heavy rain inundated a third of the country and harmed more than thirty-three million people—a number so staggering that I had to check several sources to make sure it was correct. Then I checked social media, where videos showed buildings collapsing and people carrying their children through waist-high water. Now I’m watching rivers of debris created by Hurricane Ian flow through cities on Florida’s Gulf Coast. Technology has turned us all into voyeurs of each other’s climate catastrophes. I’ve seen these scenes before, and we will see them again.

Bangkok shares its vulnerability to climate change with coastal hubs from New York to Lagos—and especially with Asia’s post-colonial port cities: Shanghai, Karachi, Jakarta, Mumbai. The very name Bangkok, which was propagated on European trading maps, hints at our vulnerability to water. It likely combines bahng, meaning “village on a waterway,” with mahgog, a colloquial name for a sour plum. (Most Thais have a loftier idea of the city: we call it Krungthep, or City of Angels.)

During the past century, like other communities that once coexisted with the water, Bangkok paved over much of its network of canals, or klongs, and dispensed with stilt houses and floating markets in favor of concrete buildings, asphalt roads, and parking lots. Construction on top of floodplains has turned the city into a tub: water that once flowed out to sea now has fewer exits. Meanwhile, Bangkok is sinking each year, largely owing to excessive groundwater extraction. Much of the city could fall below the average height of yearly floods by 2src5src, according to research published in the journal Nature Communications.

In my lifetime, Bangkok has grown from a capital city of about four million people to more than ten million. When I was young, I knew to expect the streets to fill up during heavy rains. Relatives came home from work and immediately headed to the bathroom to wash off their legs. They worried that mosquitoes were breeding and the water would ruin their cars, which resembled motorboats trailed by gray, filthy wakes. In the floods of 1983, when my parents and I were overseas, a tropical storm flooded at least seventeen Thai provinces. In 1984, planks were laid across my grandparents’ drowned lawn, and I walked across them to fish for minnows that had escaped a nearby canal.

Unlike the adults, I was excited for the flooding. To a sheltered child in Bangkok, floods brought an aquatic wonderland of catfish, gouramis, and eels. Our dogs barked to let us know that monitor lizards were making more frequent appearances. I also loved hearing my grandmother reminisce about her childhood in the nineteen-forties, when wooden canoes were the way to get around in waist-high water, and a floating noodle shop brought spicy soup to her house. I thought of the floods as nature’s way of reasserting itself, of reminding us what the landscape was like before marshes became a megacity.

The floods that made me a spectator of our climate-changed world, and which washed away any illusions that may have remained about the romance of the wet season, came in October, 2src11. I arrived in Bangkok after a long and abnormal season of rain, just in time to help my parents put up sandbags around the house. Water had already inundated the main road out front. Huge volumes had to be released from dams, in part because of mismanagement. Flooding spread to at least sixty-five provinces; more than twelve million people were affected, and more than eight hundred died. Estimates of the damage ultimately surpassed forty-six billion dollars. Scientists blamed the increase in rainfall largely on the warming caused by climate pollution; one paper warned of “increasing odds for potential flooding of similar intensity.”

I kept a Webcam, a gadget that was already ubiquitous in Bangkok, trained on the flooding outside. Who needed to brave the incessant rain when one could install eyes anywhere? By day, I could watch passersby in requisite rubber flip-flops; at night, the full-color video was replaced by infrared gray scale. The water rippled silver whenever an intrepid scooter driver whizzed by.

In the early days of the Internet, virtual-tourism Webcams could transport any viewer with a computer into a jittery, low-resolution version of Times Square, the Eiffel Tower, or a panda enclosure in some zoo. Now a screen could show me the waves lapping at the sidewalk in front of our house. In satellite photographs that I found online, I watched the blue squares that represented floodwaters, which were color-coded based on depth, approach our neighborhood like the pixelated adversary in a video game. In an e-mail to a friend in the United States, I wrote: “Feels like being under siege by some army, except here it’s water.” The disaster was just outside, yet I seemed to be watching it from afar.

Whether in New Orleans or Thailand, floods often inflict the worst damage where the poorest people live. In Bangkok, they tend to spare the central part of the city, where I rode out the 2src11 storm; for months, beyond this halo of civil-engineered protection, thousands were left homeless. Many were rescued from rooftops and then deposited into a camp in suburban Bangkok. Entire neighborhoods returned to a swamp-like state. I knew this because I watched the YouTube videos, just as I had watched videos after Hurricane Katrina hit New Orleans.

On my tablet screen, people floated by in homemade watercraft, kids swam in the flooded roads under a highway, and volunteers boarded a military truck near the house of one of my aunts. Children filled sandbags during playtime. The video clips felt truer to life than traditional news reportage, or even documentaries. They were not professionally shot and edited. The first-person perspective, often in one uninterrupted cut on a cell-phone camera, swung and shook with whoever held it. Watching them, hearing the sounds of water, I was simultaneously in my living room and in a flooded neighborhood across the city. And, when you played one video, YouTube recommended an endless stream of more like it.

I heard from my aunt Klee and cousin Prae, who lived in the city’s northern Bangkhen district. The side of their house nearest to a canal had flooded, and the water rose up to their knees in their first-floor kitchen. They talked of the stench of rot and mold and food gone bad. Their appliances would have to be replaced. But at least they still had power and the Internet, which meant they could e-mail photos of the flood damage for everyone to see.

Since 2src15, Bangkok’s metropolitan government has spent upward of 68 billion bahts, or about $1.8 billion dollars, on more than two hundred flood-control projects. The city unveiled an anti-flood park that could channel a million gallons. It built “monkey cheeks,” which are underground containers that store excess water just as primates stash food in their mouths. Four giant tunnels can now drain fifty-one thousand five hundred gallons of water per second from Bangkok; in a few years, a planned total of ten tunnels will be able to drain the equivalent of an Olympic swimming pool in less than six seconds. If Bangkok can overcome construction delays and blockage from litter in the canals, this could significantly improve flooding in the city.

Bangkok’s leaders dream of a day when new technology trumps the inconvenient truths of meteorology. Every recent governor has aimed to stop the flooding; so far, none has succeeded. The landslide winner of the last gubernatorial election, a charismatic M.I.T.-educated engineer named Chadchart Sittipunt, ran on a platform of flood prevention and new parks within fifteen minutes of every city resident. After he took office, he responded to floods by visiting affected areas and sharing the videos on Facebook Live. His 2.7 million followers could follow along with him as he waded through floodwater. When he visited the city’s flood-control center, in August, he stood in front of a wall of screens that showed real-time water and weather data. His confidence won him a stream of praise in the comments.