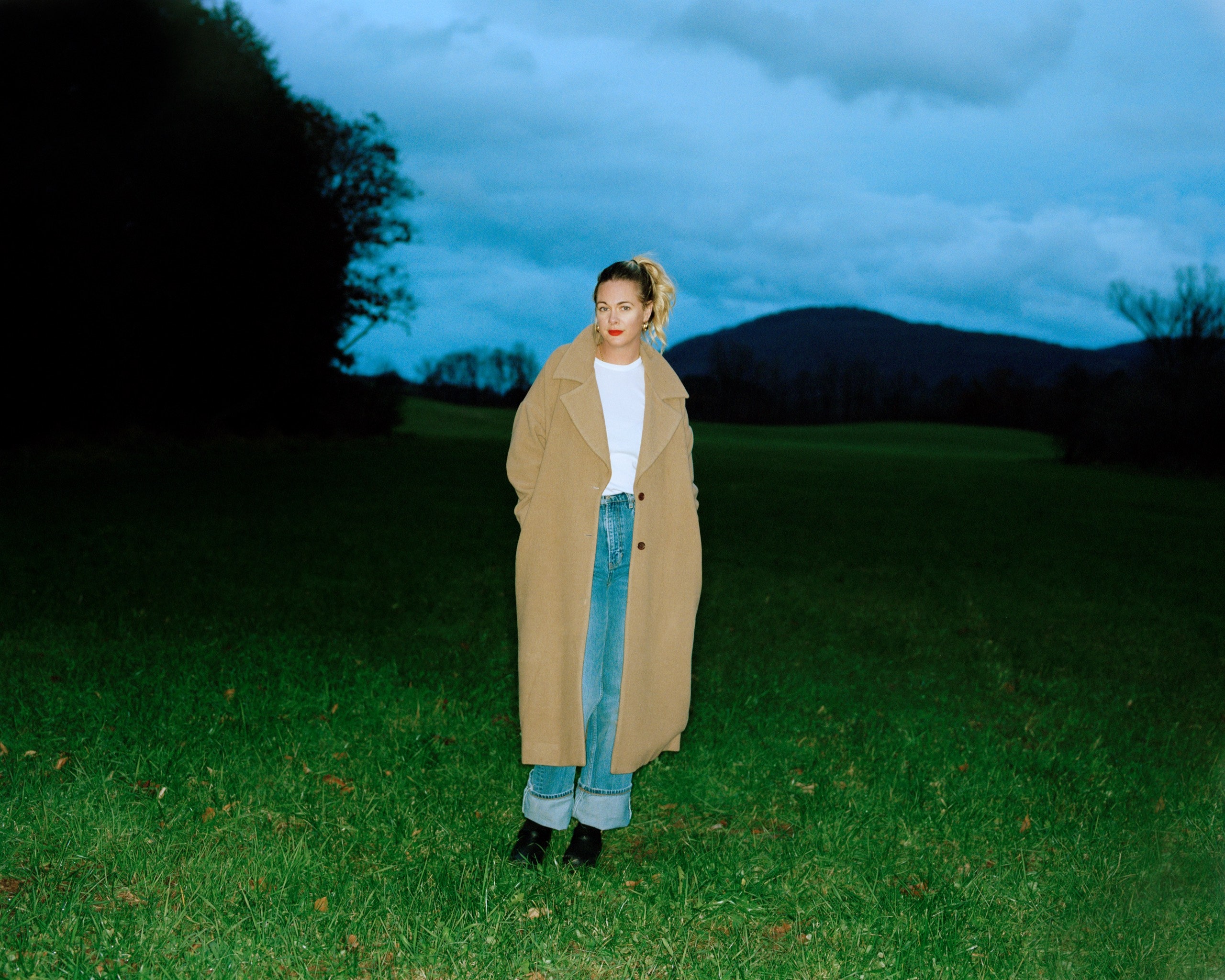 In 2018, she joined the Times as a food columnist. (“Alison Roman! Alison Roman!” read the headline on a piece announcing her appointment.) At the Times, she specialized in visually enticing recipes that brought a sense of youthful glamour to the staid domain of weeknight cooking. If you wanted to bake some salmon, you went to Mark Bittman; if you went to Alison Roman, you wanted to bake some salmon. She developed a robust following on social media. “Alison has a very strong visual sense and is a quick wit—a combination that made her a trailblazer on Instagram,” Lam told me. Home cooks made her recipes and posted pictures; Roman laboriously reposted their handiwork to her account, showing her fans love while making the agnostics wonder if they were missing out on something.

Roman’s interview with Dan Frommer of the New Consumer was intended as a business move. She and David Cho had been tossing around the idea of adding some merchandise to her Web site. “He was, like, ‘Hey, I’m gonna introduce you to my friend Dan. He does this newsletter that’s for people in the tech world and business, and not really your demographic, and I think it’d be really good for you,’ ” Roman told me. “Normally I would have passed and just been, like, ‘What the fuck is the New Consumer?’ ”

The interview began with the usual pandemic chitchat. As the conversation picked up, it centered on Roman’s desire to build a bigger business without sacrificing her principles or the messiness that had made her successful. “Is there anything you really want to do or really don’t want to do?” Frommer asked. Roman had sold a TV show to Hulu, though she said production had been stalled by COVID. She was collaborating with a cookware company on a limited-edition line of vintage-inspired spoons. She dreamed of buying a house upstate.

She also knew what she didn’t want her future to resemble. “The idea that when Marie Kondo decided to capitalize on her fame and make stuff that you can buy, that is completely antithetical to everything she’s ever taught you,” Roman said. “I’m like, damn, bitch, you fucking just sold out immediately! Someone’s like, ‘You should make stuff,’ and she’s like, ‘Okay, slap my name on it, I don’t give a shit!’ ”

She continued, “Like, what Chrissy Teigen has done is so crazy to me. She had a successful cookbook. And then it was like: Boom, line at Target. Boom, now she has an Instagram page that has over a million followers where it’s just, like, people running a content farm for her. That horrifies me and it’s not something that I ever want to do. I don’t aspire to that. But like, who’s laughing now? Because she’s making a ton of fucking money.”

At first, Roman thought that the interview had gone well. She was getting positive feedback for having spoken frankly about money. Still, there were rumblings of doubt on Twitter: Wasn’t all the high-minded talk about creative integrity a bit rich coming from someone with a limited-edition vintage-spoon line? Roman accused one critic of bullying a successful woman, then tweeted, “Just wishing I had someone to hold my hand during baby’s first internet backlash.”

Roman decided to get off social media for a while. She had just baked a chocolate cake for a friend’s bachelorette party when her manager called, saying that Chrissy Teigen’s manager had told her that Teigen’s feelings were hurt by Roman’s comments. (Kondo has not said much about any of this, but recently told the Daily Beast that “it’s completely natural for everyone to have different opinions.”) “This is a huge bummer and hit me hard,” Teigen soon tweeted, adding that she “genuinely loved everything about Alison.” Roman dashed off an apology tweet to Teigen and went to bed. “I put my phone away, and then woke up the next morning to a bajillion texts, more texts than I had ever seen in my life,” she recalled. “And I picked up my phone and was just, like, ‘Holy Moses, oh, my God, now we’re talking about race.’ ”

On May 11th, Roman issued a lengthy formal apology, saying that she had been “stupid, careless and insensitive,” and that “the fact that it didn’t occur to me that I had singled out two Asian women is one hundred percent a function of my privilege.” (She had also made a comment—“For the low, low price of $19.99, please to buy my cutting board”—that she said was based on an inside joke about an Eastern European cookbook.) Roman told me that it hadn’t occurred to her that Teigen would take offense. “It was, like, ‘You’re a hot billionaire supermodel married to John Legend, and I’m here covered in cat hair and a total mess,’ ” she said.

The Times suspended Roman’s column, a move to which Teigen objected, setting off another cycle of headlines. (This spring, Teigen stepped away from Twitter amid allegations of bullying, acknowledging that earlier in her career she had been “a troll, full stop.”) In one of the more incisive analyses of the affair, Navneet Alang, at Eater, wrote, “The backlash to Roman’s comments, like most backlashes, was a combination of legitimate grievance and the way that Twitter refracts and concentrates reaction.” Alang concluded, “If it felt as though people had been sitting around waiting for her to mess up, it was probably because many of them had.”

“I never thought I would be at the center of this,” Roman told me, in the immediate aftermath. “I thought I could hide behind chicken thighs my whole life and be, like, ‘Oh, whatever, I’m just over here making food,’ and now I’m in a very important conversation that I feel very ill-equipped to handle. But I’m going to handle it.” She continued, “Sometimes I wake up and I’m, like, ‘Oh, my God, is this navigable, and will I ever recover? Did I throw my entire life away?’ And then there’s also, like, ‘That’s a pretty big cop-out, and, if you’re gonna fucking step into it, step into it.’ ”

I decided to write about Roman in March of 2020, a few months before the New Consumer debacle. I didn’t own either of her books, and I don’t watch many cooking videos, but I had made and enjoyed a number of her recipes. (The Swiss Chard and Mushroom Galette ought to be up there with the Caramelized Shallot Pasta.) Usually, it takes some time to locate the pressure points of a story, and to find sources willing to speak about them, but, in this case, almost as soon as I started reporting, my phone and e-mail lit up. I heard from a number of women working in the food world; some were white, others were Black and brown. Several spoke on the record; others preferred not to, knowing that their comments would inevitably be construed as personal grievance when, in fact, they were less interested in singling Roman out than in making a wider critique of the food world. Two themes emerged: the sense that Roman was both a product and a perpetuator of structural racism in food media, and a wish that her sense of social responsibility was commensurate with the size of her platform. Osayi Endolyn, who writes about food and identity, told me, “You can’t really explain the phenomenon of Alison Roman as a figurehead without understanding how whiteness functions in America, and how whiteness functions in food and food media.”

In contrast to the geek-out approach favored by writers like J. Kenji López-Alt, Roman often presents herself as less informed than she is, or maybe ought to be. “I am not a vegetable scientist (lol) so I am not saying this is a FACT,” she writes, “but it *feels* like green beans have an especially tough, highly impenetrable exterior, but when they are warm, they seem to really accept flavor much better than when cold.” For all her outspokenness, she is reticent on certain issues. She’ll recommend a brand of pepper mill (Unicorn), or tell you what lipstick she’s currently wearing (Lasting Passion, a “really awesome orangey-red” from MAC), but she has little to say about the sustainability of tuna. “I speak to what I know,” Roman told me, adding that accessibility and affordability are also important aspects of the conversation. “I’m not a scientist, I’m not a food reporter, I’m not spending my time doing that research. How far does my responsibility extend?”

As the writer Andrea Nguyen has observed, the brash, prescriptive “bro tone” that has served many a male food-world personality so well is increasingly becoming gender-neutral. Roman has been one of its premier female purveyors, rarely shying away from—and occasionally picking—a fight. “Rice has always seemed like filler to me,” she wrote in 2016’s “Dining In,” dismissing the world’s second most important cereal crop as though she were swiping left.

At the end of 2018, Roman débuted what became known as #TheStew (né Spiced Chickpea Stew with Coconut and Turmeric). To make it, you soften garlic, ginger, and onions in olive oil. You add chickpeas, frying them with red-pepper flakes and turmeric, then simmer them in coconut milk. After wilting in greens, you serve the dish with mint leaves, a dollop of yogurt, and toasted flatbread. The recipe was healthful. It was warming. It was, to some readers, obviously an Indian chana masala or chole or, alternatively, a Jamaican chickpea curry. “This is neither a soup nor a stew, it’s called chana masala, and Indians have been eating it for centuries. Seriously, 🙄,” an Instagram user named Priya Ahuja Donatelli wrote, in the comments of a post in which Roman had announced a giveaway with an equity-focussed spice company, inviting readers to respond with their “favorite ideas for dismantling the patriarchy OR cooking with turmeric.”

Roman was speaking the language of social justice, but she wasn’t crediting the cultures from which she drew certain techniques and ingredients. She was shine theory in her head, but Sun Tzu in her heart. “I don’t read other cookbooks, I don’t follow anybody on Instagram,” she told me one day. “That clouds shit for me.” Nor did she acknowledge that her branding implied personal ownership over deep-rooted dishes. (“I wasn’t very thoughtful about it,” she said recently.)

“There’s a sense in editorial, publishing, and TV spaces that, if you are from a nonwhite background, what you talk about has to be generated from your identity in some way,” Endolyn told me. “But if you’re a white person you can go anywhere you want. You can talk about Asian cuisines, you can talk about African or African American cuisines, you can talk about South American cuisines. No one’s saying you can’t cook with turmeric—cook with turmeric, turn orange if you want to! The point is to recognize that people from nonwhite, non-Eurocentric cultures tend to be pigeonholed by their identity (which isn’t necessarily a measure of expertise) and not offered the same leeway to experiment, play, and ‘discover’ things.”

When Jezebel asked Roman about the issue of cultural appropriation, she dug in her heels. “Y’all, this is not a curry,” she said. “I’ve never made a curry.” She added, “I come from no culture. I have no culture. I’m like, vaguely European.” Through years of being told online that she was fat, that her pants were ugly, that her voice was annoying, Roman had learned to tune out negative feedback, positioning herself in opposition to whomever she perceived as a hater. She sometimes lent her support to progressive causes, but she was also hesitant to stray from her area of expertise, once telling Cherry Bombe, “Compared to a lot of women in our field and industry, I am definitely on the quieter side of politics, but that’s mostly because of my educational level.”