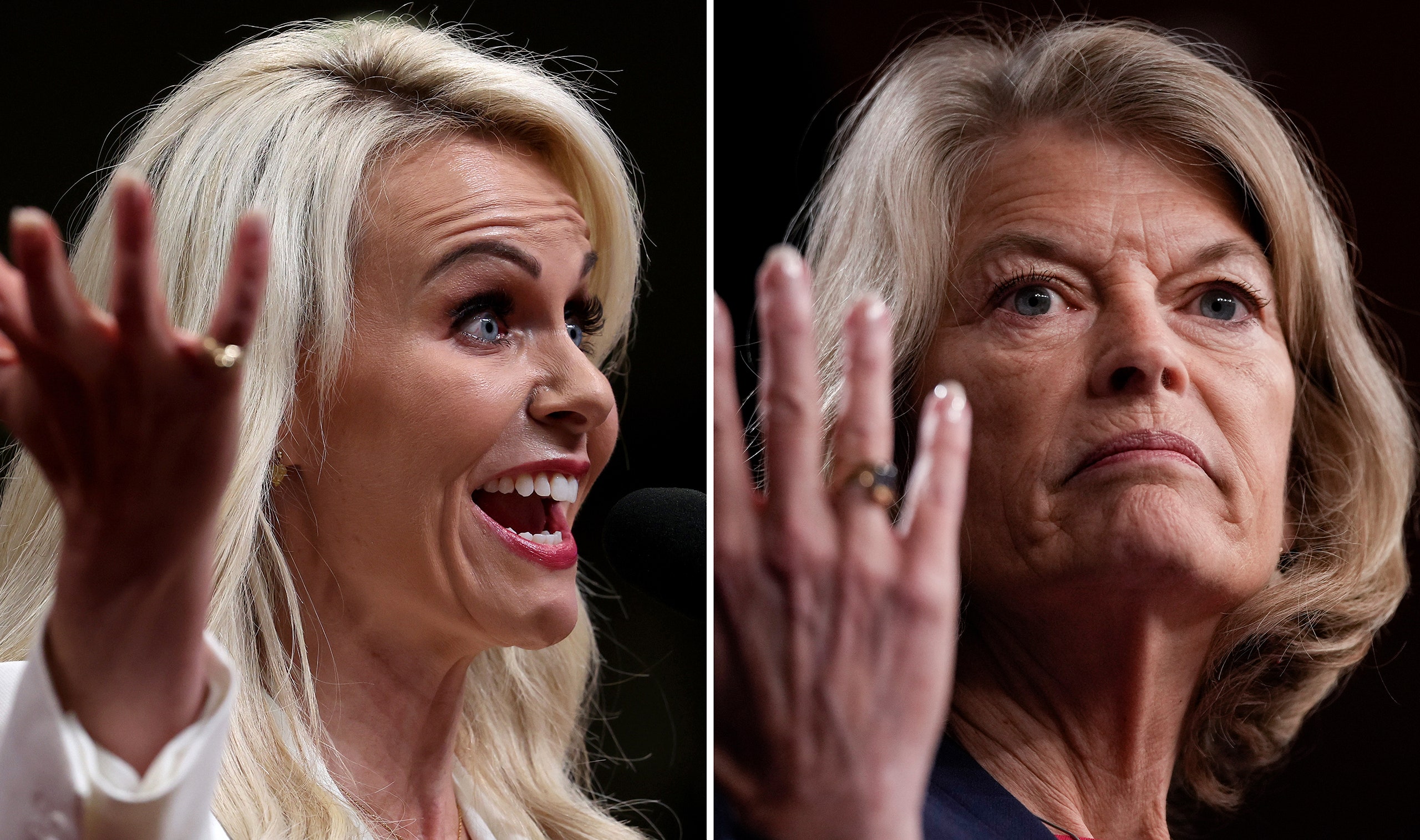 Eighty-two per cent of Alaskan communities aren’t connected by roads. After tribal delegates made their annual journeys from the state’s most remote points to the Alaska Federation of Natives meeting, in Anchorage, they sat in a ballroom and watched Republican Senator Lisa Murkowski and her Trump-backed opponent, Kelly Tshibaka, spar over who was more ruggedly Alaskan. The election was two weeks away, and the two candidates were virtually tied in the polls; the question was who’d eaten muktuk, a traditional Alaska Native food consisting of whale skin and blubber, that week. “I did,” Murkowski said. “And Cordelia”—her special assistant for rural affairs, just offstage—“has some in her purse right now!” Tshibaka one-upped her: she’d made muktuk. “I still have my clothes drenched in whale oil,” she said, after the event. “The kids say the couch smells like an aquarium. If you’re not willing to serve muktuk, if you’re not willing to show up for the Party, then you’re not really campaigning.”

The previous evening, Murkowski had told a reporter for the Anchorage Daily News that she would vote for Mary Peltola, the incumbent Democratic congresswoman who’d won a recent special election to replace the Republican Don Young following his death in office, and was now running for a full two-year term. (Young had held the seat since 1973.) As I looked at lynx-fur hats at the A.F.N. craft fair, Murkowski and Peltola were both wafting through various artisan stalls. They posed for a photo together; each wore a kuspuk, a type of Alaska Native hooded overshirt, by the same designer. (Peltola, who is Native, had given one to Murkowski in D.C.) “Lisa’s support for Mary codified a political alliance that was all but formal already,” a representative in the Alaska state house told me. Smiling with her arm around Peltola, Murkowski was the living embodiment of an endangered form of bipartisan mingling that now infuriates a strain of the state and national Republican Party. “Lisa’s electoral base includes most rule-of-law liberal Democrats in Alaska, while Kelly is Donald Trump’s personality traits and the dystopian scenarios that come along with that,” the state representative said.

Last year, the Alaska Republican Party censured Murkowski after she voted to convict Trump at his second impeachment trial; subsequent votes to confirm Supreme Court Justice Ketanji Brown Jackson and Secretary of the Interior Deb Haaland, and for President Biden’s gun-control bill, rendered the schism total. The state Party now endorses Tshibaka. Randy Ruedrich, a former Party chair who worked on several of Murkowski’s reëlection campaigns over her twenty years in office, is Tshibaka’s campaign treasurer. “We’re seeing a race between a Republican and a lady who’s no longer a Republican,” he said. A retired school principal named Pat Chesbro is also running, as a Democrat, and polling at around sixteen per cent. (Alaska recently adopted nonpartisan primary voting, which means that the top four candidates in the primary, irrespective of party, advance to the general election.) The much-watched question of whether Democrats maintain control of the Senate isn’t at play here—the winner will be Tshibaka or Murkowski—but the contest holds more profound implications for what kind of Republican can succeed these days. Even if Murkowski keeps the seat, the state house representative told me, “it’s like a Galápagos turtle. They’re alive, they’re moving, but it’s the end of the line.”

Everyone has their own version of Murkowski’s evolution—or not. “I’ve known Lisa since 1998, and I haven’t seen her shift in any way at all,” Peltola told me. “I think that what we’re seeing is a pendulum that goes further to the right and further to the left, and she’s staying exactly where she has been, but it’s a longer continuum.” Tshibaka, a former watchdog for the federal government, who appears at CPAC and on Fox News, falls at the far end of that continuum, alongside “America First” candidates like Blake Masters and Kari Lake. One could frame the race between Murkowski and Tshibaka as one of warring visions for the future of the Republican Party, or as a referendum on whether the state is open to its senator’s break with the G.O.P. “I look at myself as an Alaskan Republican whose responsibility is to all of the people that I serve, whether they voted for me or not, whether they’re Republicans, Democrats, Greens, independents, whatever,” Murkowski told me. “That’s my allegiance. I know that bothers some people who want me to be that rigid, partisan person, and I’m just not. I hate to use the words that the media uses, like ‘extreme.’ ”

In Alaska, this isn’t just a political platitude. More than sixty per cent of the electorate doesn’t identify with a major party. “The parties have never been influential here,” Tim Bradner, the publisher of the Alaska Legislative Digest and Alaska Economic Report, told me. “They can still wave flags and make endorsements, but they don’t matter.” Murkowski isn’t the only one making unusual alliances. At one point, Peltola had more Republicans and Independents working in her congressional office than she did Democrats, and her “Fish, Family, Freedom” slogan doesn’t, to the untrained eye, read like boilerplate liberal-campaign copy. Dan Sullivan, the state’s junior senator and a staunch conservative who campaigned for J. D. Vance, in Ohio, has joined with Peltola—along with Murkowski and the local Native population—to support an oil-drilling project in Alaska’s North Slope. Even Tshibaka admitted, on a recent video call, that a Democrat friend flew to Alaska to knock on doors for her. This refusal to play the national political game isn’t revolutionary so much as it is a return to—or continuation of—a time before the parties segregated themselves ideologically. When I called former Governor and Senator Frank Murkowski—his wife, Nancy, chastising him in the background, “Don’t talk about Lisa!”—he told me, “It depends more on personalities, the individual candidates that have served since statehood, in 1959. We’re all by ourselves in many ways.” But Alaska is also less unique today. Even in a moment of reactionary partisanship, nationally, a certain kind of crossover is on the rise: anti-Trump Republicans such as Liz Cheney, who can no longer hold on to her seat in Congress, are campaigning for Democrats on the loftier platform of saving the Republic.

A few days earlier, I’d met Tshibaka at a rally in Soldotna, hosted by the Kenai Peninsula Republican Women. It was Alaska Day, which commemorates the state’s formal transfer from the Russian Empire, in 1867, after the U.S. purchased it for about seven million dollars. “Sweet Home Alabama” played on the sound system, as a hundred or so attendees took seats at folding tables covered with red-white-and-blue tablecloths and flyers in support of a ballot measure calling for a state constitutional convention. “We have a senator who’s working for the establishment,” Tshibaka told the group, accusing Murkowski of siding with “radical environmentalists.” She went on, “I know a lot of people who can’t pay for gas and groceries this week. People are living off of what they killed, or what they caught, or what they’ve got canned.”

My tablemates shared some of the prevailing concerns about Murkowski. “She’s a RINO—she voted to pass down some of our gun rights,” Leroy Rogers, a Florida native who used to work in construction and has been living in Alaska for the past thirty years, told me. A Navy veteran whose niece works for Murkowski said, “She’s big establishment, D.C., all that junk. She’s not a conservative.” Tuckerman Babcock, a former chair of the Alaska G.O.P. now running for state senate, took the stage. “Kelly Tshibaka is the only actual Republican candidate,” he said. (The man next to me: “Amen.”
) Ben Carpenter, a state representative, invoked Benjamin Franklin. “ ‘We have a republic . . . if we can keep it.’ And that’s where we are,” he said. “This is like the Declaration of Independence. Pledge your life, your fortune, and your sacred honor to take the nation back.”

Despite Alaska’s independent streak, the national political crosswinds have found their way in. The Senate Leadership Fund, a super PAC close to Mitch McConnell, has spent millions on ads attacking Tshibaka. (Charlie Kirk, the founder of Turning Point USA, said, on his radio show, “Where is Senate Republican money going? Mitch McConnell is sending it to defeat the conservatives, not defeat the Democrats.”) The Alaska Republican Party responded to the ads by censuring McConnell. Meanwhile, Tshibaka has Trump; key fund-raising efforts include a sweepstakes to win a bear hunt with Donald Trump, Jr., and a trip to Mar-a-Lago. One of her advisers is Tim Murtaugh, Trump’s 2src2src campaign communications director. The Patriot Freedom PAC, which also backs Sarah Palin, who is hoping to beat Peltola and Nick Begich, a Republican opponent, for the state’s House seat, ordered twenty thousand branded lightsabres for Tshibaka—which, pronounced correctly, sounds a lot like “Chewbacca.” (The lightsabres were held up at customs.) “The Lower Forty-eight is trying to buy our Senate seat,” Tshibaka said. She called out “D.C. insiders” imposing their will on “grassroots Alaskans.”

When Frank Murkowski was elected governor, in 2srcsrc2, after twenty years in the U.S. Senate, he gave the rest of his term to his daughter Lisa, who was then the majority leader in the Republican-controlled Alaska House of Representatives. (Lisa is only the fourth senior senator in the state’s history, following Ted Stevens; Ernest Gruening, a former editor of The Nation who had been governor of the Alaska Territory before statehood; and Bob Bartlett, who won a coin flip against Gruening.) The Times wrote that the Murkowskis were “joining the Bushes and Kennedys as an American political dynasty.” Even back then, Lisa’s perceived moderation—and the nepotism—were a liability. “Our Republican Party is quite conservative, and she is not,” Jerry McBeath, a professor of political science at the University of Alaska Fairbanks, told the Times. “Alaska prides itself on its individuality, and the birthright aspect of this troubles people.”

In 2srcsrc6, part of the Murkowski dynasty was successfully deposed, when Sarah Palin, the former mayor of Wasilla, ran against Frank, beating him in the primaries—by more than thirty points—and soon replacing him as governor. Palin portrayed Frank as arrogant and out of touch; that year, he was rated the most unpopular governor in the country. (He’d also used state money to buy a Westwind II jet for nearly three million dollars.) “The Murkowskis have been handing down our Alaska Senate seat,” Tshibaka said, at CPAC, in February. But this isn’t Lisa Murkowski’s first fight to preserve power. In 2src1src, she lost the Republican primary to Joe Miller, a Tea Party candidate, then ran in the general election as an Independent, managing to win via a write-in campaign that relied on centrist and Alaska Native support. (More than fifteen per cent of the state population is Alaska Native.)