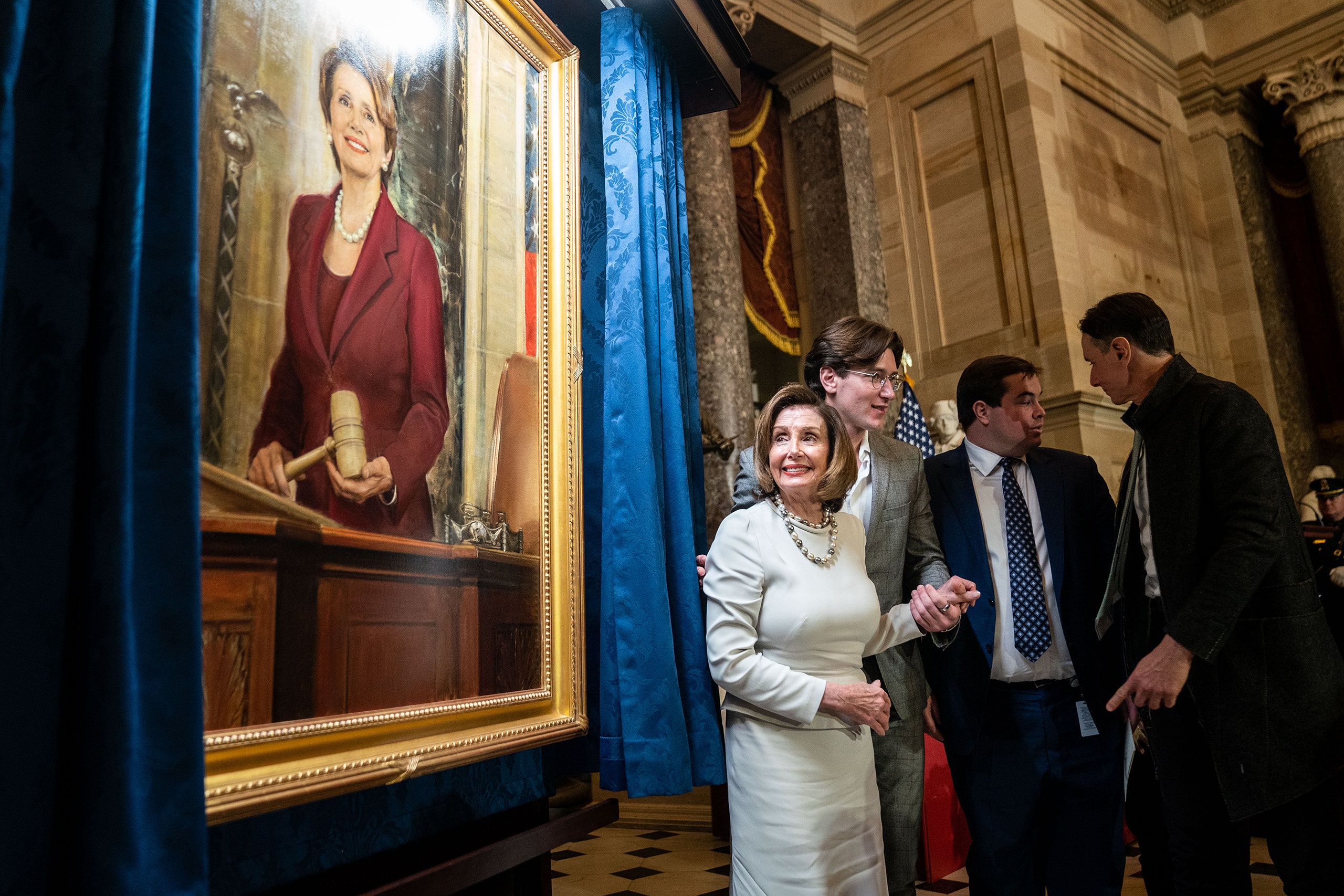 On Wednesday afternoon, House Speaker Nancy Pelosi walked into Congress’s majestic Statuary Hall for the unveiling of her official portrait. She was radiant, dressed all in white, smiling more broadly than usual. Her husband, Paul Pelosi, was at her side, wearing a hat to conceal the serious head injuries he sustained this fall in an attack by a violent Trump supporter at the Pelosis’ San Francisco home. The tone of the event was over-the-top celebratory. Representative Zoe Lofgren, a fellow Northern Californian, praised Pelosi as “the most effective Speaker in the history of the United States,” noting her many achievements, including securing passage of the Affordable Care Act and, just this week, the Respect for Marriage Act, which protects the right to same-sex and interracial marriage. Representative Lucille Roybal-Allard, another Californian who, like Pelosi, is the daughter of a storied House member, said, “there is no doubt Speaker Pelosi will go down in history as our nation’s greatest Speaker.”

John Boehner, the former Republican Speaker, offered a bipartisan note of nostalgia for a time when one could disagree on Capitol Hill without being outright disagreeable—a barb at the present G.O.P. leadership, with whom Pelosi is barely on speaking terms. Boehner, famously emotional, broke into tears when he quoted his daughters: “Tell the Speaker how much we admire her.” At the end of his short speech, he said, “Leaders lead, and, Madam Speaker, you have led.” When it was over, Pelosi jumped out of her seat to embrace him. Kevin McCarthy, who is currently struggling to put together enough votes to succeed Pelosi as Speaker when Republicans take control of the chamber on January 3rd, looked on silently. It was a pointed reminder of the degraded state of the House Republicans, increasingly in the thrall of right-wing extremists whom Boehner has derided as “political terrorists.”

By any measure, Pelosi’s rule over the House has been a historic one. She is both the first woman Speaker and the longest-serving House leader in either party since the tenure of the legendary Sam Rayburn. Her valedictory tour this week—after the midterms, she announced that she will step aside as Democratic leader, while keeping the seat in Congress she has represented since 1987—has included not only the portrait unveiling but the renaming of the Caucus Room in the Cannon House Office Building for her, and the release, on HBO, of an intimate documentary of her time in office, “Pelosi in the House,” produced by her daughter, the noted filmmaker Alexandra Pelosi.

The film makes clear that Pelosi’s second run as Speaker will be most remembered not for the fact of her glass-ceiling shattering or any legislative accomplishment, although there were many, but her steely opposition to Donald Trump. Pelosi, who served as Speaker from 2srcsrc7 to 2src11 and then returned to the post when Democrats won the House in the 2src18 elections, at the midpoint of Trump’s divisive, reckless Presidency, proved to be his most fearless adversary. Molly Ball’s 2src2src biography of Pelosi begins, appropriately, with an epigram from Senator Amy Klobuchar: “If you think a woman can’t beat Donald Trump, Nancy Pelosi does it every single day.”

The portrait of Pelosi, which shows her as she was on January 3, 2srcsrc7, when she became the first and so far only woman to lead the House, will now be hung in the Speaker’s Lobby, along with those of other legends—Sam Rayburn, Joe Cannon, Tip O’Neill—and quite a few forgettable hacks. (Though no longer, at least, the four Speakers who joined the Confederacy—their portraits were removed in 2src2src.) The lobby is one of the great Washington venues, an ornate corridor off the House floor where deals are hatched, gossip is spread, and reporters looking for quotes mingle freely with the Capitol’s many ambitious, quote-dispensing politicians. The lobby was also the scene of the most harrowing moment of Pelosi’s tenure, when the Capitol was overrun by a pro-Trump mob on January 6, 2src21, and one of the insurrectionists was shot and killed by a Capitol Police officer as she tried to climb through a shattered window into the corridor through which, just minutes earlier, House members had been fleeing for their lives. Chuck Schumer, lauding Pelosi at Wednesday’s ceremony, called her “unshaken,” “calm” and “at her best” on that awful day, the first time that the U.S. Capitol was overrun by a hostile force since the War of 1812.

Amid all the well-deserved tributes, I’ve found myself thinking of an interview I did with Pelosi right after the 2src14 midterm election. Democrats had just failed once again to regain control of the House. Pelosi, who was facing questions about her age and calls to step aside as Party leader, clearly felt that she was not getting the credit she deserved for her accomplishments. She had recently complained that she never made the cover of Time magazine. There was an edge to her, and a sense of unfinished business.

“Why wouldn’t you recognize a woman, first woman in history, speaker of the House?,” she told me during a Politico summit on women and power. When Boehner was elected Speaker after her, she noted, snapping her fingers for emphasis, he showed up “right there on the front of Time magazine.” The same thing happened for Mitch McConnell, the Senate leader and “not even a constitutional office, not even as high as Speaker,” as Pelosi put it, snapping her fingers again. “Right on the front of Time magazine.” Her point, she insisted, was not about herself but that “it’s not right that women should be, shall we say, second-classed in terms of the recognition that they should receive.”

The Trump years offered her that recognition. She finally made the cover of Time magazine in the fall of 2src18, under the headline “The Persistence of Nancy Pelosi.” She made it again during Trump’s first impeachment proceedings, in January, 2src2src. For years before Trump, this mother of five and grandmother of nine had often been underestimated by the capital’s male power brokers, but her vast experience with recalcitrant toddlers proved to be almost a superpower when she went up against the petulant President.

From the moment in December of 2src18 when Pelosi coolly rebuked Trump—“Please don’t characterize the strength I bring to this meeting,” she responded to his patronizing slight—and walked out of the White House in shades and a sharp red coat, her leadership was rarely ever questioned. Just as significant as her public jousting with the President was her success, despite a narrow majority of just a few seats, in keeping her Democratic caucus together on Capitol Hill. My favorite scenes in the film are when Pelosi is making calls and taking names on tough votes. “There are no passes,” she says at one point to a recalcitrant member. Later, she explains the key to winning tough negotiations. “People get tired,” she warns. “You can’t get tired. You can never get tired.” A pragmatist in a capital that prizes big-mouthed ideologues, Pelosi excelled in the doing, in the backwards-and-in-heels way that women are often forced to show their superior mastery.

The belated recognition of her mastery, though, has come at a price—for Pelosi herself, and for the institution she loves. The attack on her husband, right before this fall’s election, was apparently a central reason driving her and her family’s decision that now was the right time for her to step aside as Democratic leader. “After my father was attacked, that was it,” Alexandra Pelosi told CNN in an interview this week. “We were sitting in the I.C.U., and we were just saying, ‘We’re done.’ ”

As for Congress, the two impeachments that Pelosi led against Trump offered no more than symbolic accountability for a rogue President who continues to elude the real thing. In some ways, the dual impeachments followed by acquittal in the Republican-controlled Senate underscored the futility of impeachment in this partisan age, proving that a conviction for Trump, or any President, might well be impossible given the polarized state of our politics. The Republican radicalization that Pelosi stood so strongly against, meanwhile, is far from receding, and her beloved House will now be run by a G.O.P. majority in which Trump-supporting, election-denying radicals such as the conspiracy theorist Marjorie Taylor Greene exert outsized influence.

At such a time, it may be fair to ask: Is there a man out there, in either party, who is tough enough to fill Nancy Pelosi’s stiletto shoes? ♦