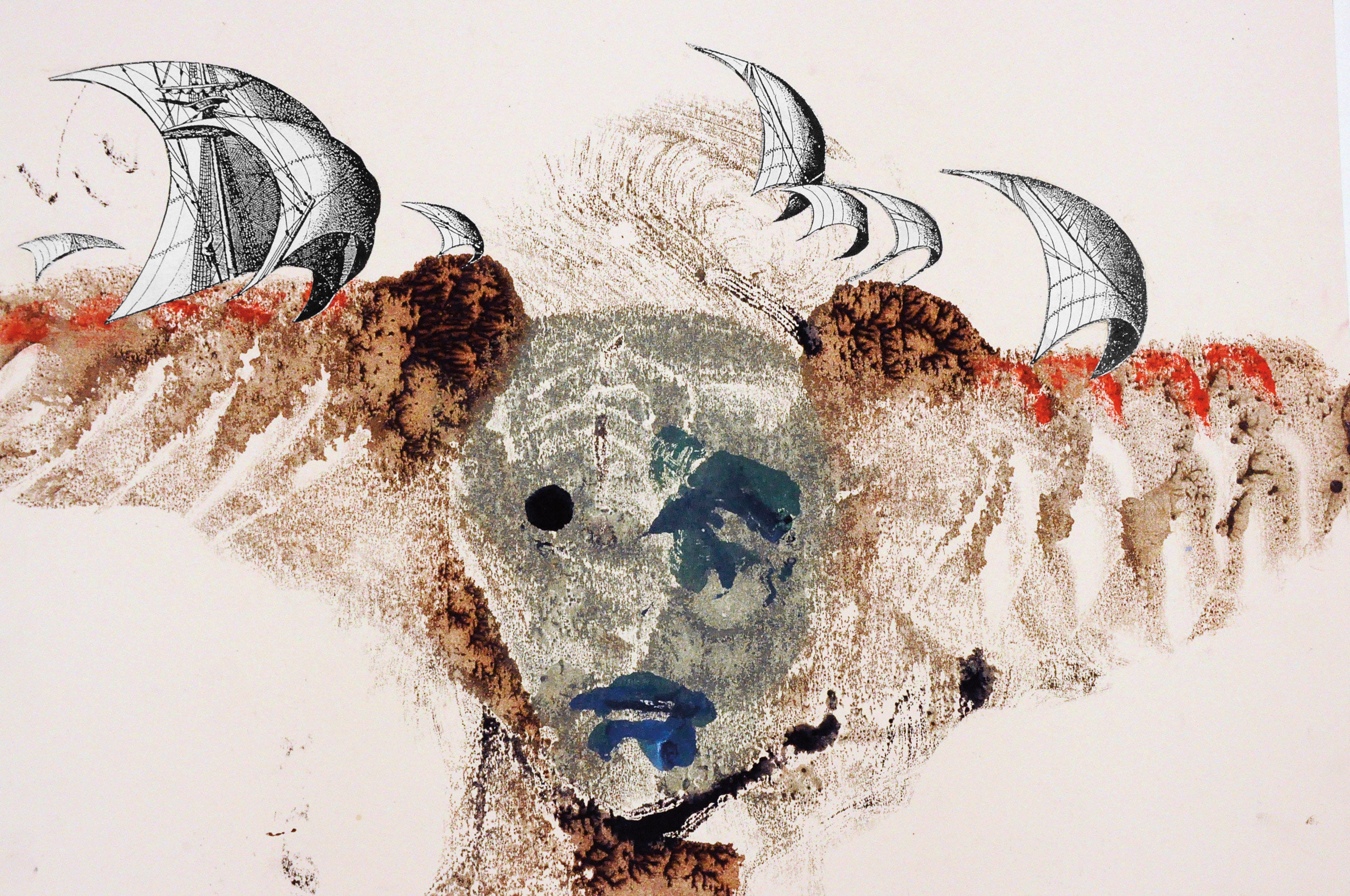 King Shahriyar and his brother King Shahzaman suspect their suffering to be unique in this world. Their wives have slept with other men, and this drives them to grief, to madness—Shahzaman skewers his wife and her lover with a sword—and to a quest to find someone unluckier than them. One morning, after waking up on a wooded beach, they see a woman standing next to a sleeping jinni. “Make love to me and give me satisfaction, or I will set the jinni on you,” she says. The men, reluctantly, oblige. The jinni has kept the woman locked in a glass chest, deep in the sea, but that hasn’t stopped her from sleeping with ninety-eight other men. “He thought he had me and could keep me for himself,” she says, “forgetting that what fortune has in store cannot be turned, nor what a woman wants.”

The brothers, unhinged by these words, run back to their thrones. Shahriyar begins to take a new bride each night, only to have her killed the following morning. Parents grieve; the kingdom darkens. Eventually, Shahrazad, the vizier’s daughter, comes up with a plan. She offers herself as a bride, but holds Shahriyar’s attention, night after night, with stories that end on a cliffhanger. With every dawn, the king decides to let her live, burning to know what comes next.

This is the frame story for the loose collection of tales known, in English, as “Arabian Nights,” as narrated in an electric new translation by the British Syrian poet Yasmine Seale. Beyond the frame tale and a few core stories, there is little agreement on what belongs in the “Nights.” The collection has no single authoritative manuscript. No known author. As the scholar Paulo Lemos Horta, the editor of this new edition, explains in an introduction, we know a book by its name was circulating, in Cairo, as early as the twelfth century, but that copy has never been found. The most famous manuscript—the “Syrian” manuscript, as it’s known to scholars—comes from the fourteenth or fifteenth century, and there is a fragment of a manuscript from the ninth century, believed to be an early adaptation from Persian. (Many of the tales are believed to have travelled from India and Persia to the Arab lands where they flourished.) Most frustratingly, no Arabic manuscripts for the stories that most people know—“Aladdin and the Wonderful Lamp,” “Ali Baba and the Forty Thieves,” “Prince Ahmad and the Fairy Pari Banu”—seem to exist. Their first known printing was in French, in the eighteenth century, by the Orientalist scholar Antoine Galland, and he was long believed to be their legitimate author.

Without an Arabic text to work from, contemporary translators often resist including these popular tales in their work. Seale and Horta take a different approach. For some time now, it’s been known that the French stories have an Arabic source, a man that Galland met in 1709. At the time, Galland had come out with seven volumes of his “Nights” translation, which were based largely on the Syrian manuscript. (A friend gave him the document in 1701.) The books sold terrifically well, and Galland’s publisher pestered him for more—but he had reached the end of his manuscript, and was at a loss for material. That spring, at a friend’s apartment, Galland was introduced to Hanna Diyab, a traveller from Aleppo who knew some “beautiful Arabic tales,” as Galland wrote in his diary. In the course of a month, Diyab told his stories and Galland scribbled them down. (Galland’s notes survive.) Diyab never indicated that these stories were part of the “Nights.” He never explained whether he’d heard them somewhere or whether he’d made them up.

Diyab’s memoirs were rediscovered in the Vatican Library in 1993 and published, in French, in 2015. They were finally released in English last spring. Horta and Seale’s volume, in turn, pairs Diyab’s stories with a collection of the most influential tales from Arabic manuscripts. Each page is adorned with illustrations and photographs from other translations and adaptations of the tales, as well as a wonderfully detailed cascade of notes that illuminate the stories and their settings. “Only such a selection would offer the reader, whether new to the tales or already an expert, the chance to read them meaningfully in relation to one another,” Horta writes.

I am both new to the tales and not. Translations of “Arabian Nights” have had many devoted readers, from Marcel Proust to Charles Dickens, James Joyce to Charlotte Brontë. But the stories never held much stature among Arabists. The originals are often written in what’s considered “Middle Arabic,” and they’ve rarely been embraced by the classical canon. “It is Arabic and at the same time it is not,” one scholar Horta cites insisted, in 1956. “Every connoisseur of the genuinely Arabic will feel in the complex whole of the modern ‘1001 Nights’ something diluted, impoverished, superficial and fictitious.”

But I grew up in Egypt, where the stories’ influence, as cultural touchstones, is overwhelming. Between the “Nights”-based stories I heard as a child and the “Nights”-themed soap operas that flood TV during Ramadan, I assumed that many of the tales would ring a bell. In fact, very few did, and they were mostly the tales added by Galland. Even then, certain details seemed new. I didn’t know that the flying carpet belonged not to “Aladdin” but to “Prince Ahmad and the Fairy Pari Banu,” nor did I know that Ali Baba is not actually the protagonist of his story. The tale that Diyab told Galland is about a female slave who saves Ali Baba, and it was originally titled “Marjana’s Perspicacity, or The Forty Robbers Extinguished through the Skillfulness of a Slave.” To my greatest surprise, I had almost no recollection of the Arabic stories.

And yet those older, unfamiliar tales felt nearer to me, their lulling cadence recalling the rhymed folk tales that thrive in Egypt’s villages to this day. The most striking feature of the Arabic tales is their shifting registers—prose, rhymed prose, poetry—and Seale captures the movement between them beautifully. Nomad warriors descend on a city “as many as grains of sand, impossible to count and to withstand.” Three characters break a chest open, and find “inside a basket of red wool, and inside the basket was a stretch of carpet and, beneath it, a shawl folded in four, and, beneath it, a young woman like pure silver, killed and cut in pieces.”

Many descriptions remain distinctly Arabic. Seale, instead of idiomatically resolving them, transports us to their native soundscape. A woman’s naked body is “like a slice of moon.” A character who dies is “taken to her Maker,” and another tells us that his soul is at his feet. Seale evokes the ambiguity of the Arabic prose—we see “ten couches spread with blue”—and she has an uncanny talent for preserving its strangeness, too. In one arresting passage, she enumerates the pastries at a bustling market:

Many of these sweets, including the apparently fantastical ones, are real, and can be found in medieval Arabic texts. Seale had to coin “inventive names for desserts that have no English equivalents,” a note explains. By the time we get to “eat-and-thanks,” it’s her patterning of sound, rather than her description, that helps us understand what a treat might look or taste like.

In the stories from the French, Seale tries to rescue a brisk narrative quality from Galland’s ceremonial cadence, but the stories that emerge are still much tidier than the Arabic ones. Characters are better developed, and we get a deeper glimpse of their interiority. But, read in comparison with the Arabic characters, who often break into verse, they feel flat, tonally sterile. One scholar counted 1,420 poems in the “Nights,” many of which belong to established poets from the tenth to fourteenth centuries. Famous English translators often disagreed about whether to include them; Seale, thankfully, translates dozens of them, and they’re one of the great strengths of this edition. Wrecked by escalating misfortunes, one man weeps, “My fate is like an enemy: / It shows me only hate. / If once it stoops to kindness / It soon mends its mistake.” Another character, on the edge of despair, says these lines: